Silting in the Grand Canal in the Domain of Chantilly (Oise, France)—Catchment-Scale Hydrogeomorphological Reconnaissance and Local-Scale Hydro-Sedimentary Transport Modelling

The domain of Chantilly (Oise, France) includes a castle and a garden, both dating from the eighteenth century, which are seen as important legacies of France’s history. Nowadays, the 2.5 km canal that runs through the domain is subject to the phenomenon of silting, leading to the accumulation of sediments within the canal linked to the proliferation of algae, which has a dissuasive effect among visitors. HEC-RAS software (Hydrologic Engineering Centers River Analysis System, US army corps of Engineers, Washington, D.C., USA) was used to model and understand sediment accumulation within the canal. This model is widely used in the literature tackling sediment transport and accumulation, and allows the forecasting of which stretches of the canal are most susceptible to sediment accumulation. The simulation results highlight an accumulation of sediment near the entrance of the Nonette stream into the canal and a propagation through the canal. The total accumulated volume assessed by the model between 2001 and 2010 equals 3901 m3, when the reconnaissance of the catchment showed the sediment was not a limiting factor. However, the volumes determined are underestimated, as matter brought by vegetation or other systems different from the river (e.g., wind, rainfall) is not considered in the calculation. The quantity of sediment is also subject to uncertainties, as the bathymetry of the canal is not available. View Full-Text
Keywords: sediment; catchment; HEC-RAS; canal; Chantilly sediment; catchment; HEC-RAS; canal; Chantilly
►▼ Show Figures 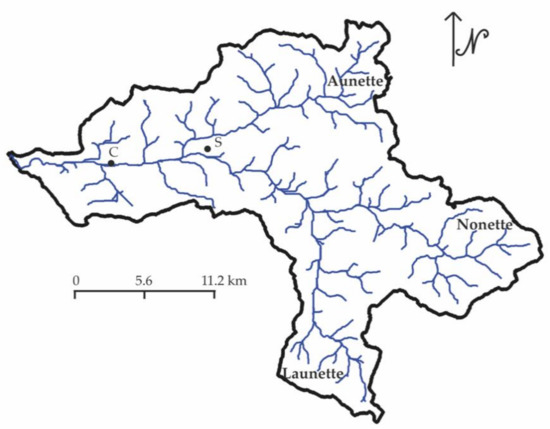