Ecosystem-Based Restoration to Mitigate Eutrophication: A Case Study in a Shallow Lake

India’s largest freshwater ecosystem of the Kolleru Lake has experienced severe threats by land-use changes, including the construction of illegal fishponds around the lake area over the past five decades. Despite efforts to protect and restore the lake and its riparian zones, environmental pressures have increased over time. The present study provides a synthesis of human activities through major land-use changes around Kolleru Lake both before and after restoration measures. For this purpose, archives of all Landsat imageries from the last three decades were used to detect land cover changes. Using the Google Earth Engine cloud platform, three different land-use scenarios were classified for the year before restoration (1999), for 2008 immediately after the restoration, and for 2018, i.e., the current situation of the lake one decade afterward. Additionally, the NDVI (Normalized Difference Vegetation Index) and NDWI (Normalized Difference Water Index) indices were used to identify land cover dynamics. The results show that the restoration was successful; consequently, after a decade, the lake was transformed into the previous state of restoration (i.e., 1999 situation). In 1999, 29.7% of the Kolleru Lake ecosystem was occupied by fishponds, and, after a decade of sustainable restoration, 27.7% of the area was fishponds, almost reaching the extent of the 1999 situation. On the one hand, aquaculture is one of the most promising sources of income, but there is also limited awareness of its negative environmental impacts among local residents. On the other hand, political commitment to protect the lake is weak, and integrated approaches considering all stakeholders are lacking. Nevertheless, alterations of land and water use, increasing nutrient concentrations, and sediment inputs from the lake basin have reached a level at which they threaten the biodiversity and functionality of India’s largest wetland ecosystem to the degree that immediate action is necessary to prevent irreversible degradation. View Full-Text
Keywords: fishponds; Kolleru Lake; Google earth engine; eutrophication; land-use change fishponds; Kolleru Lake; Google earth engine; eutrophication; land-use change
►▼ Show Figures 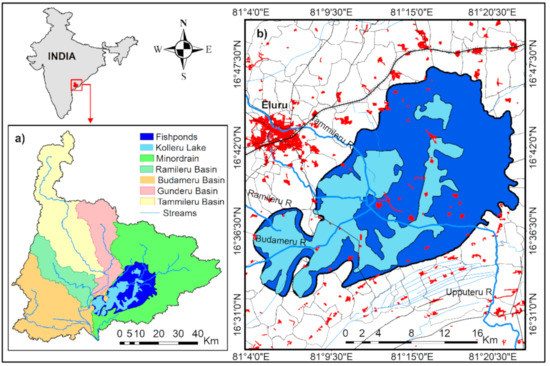