The aim of this study is to estimate surface soil moisture at a spatial resolution of 500 m and a temporal resolution of at least 6 days, by combining remote sensing data from Sentinel-1 and optical data from Sentinel-2 and MODIS (Moderate-Resolution Imaging Spectroradiometer). The proposed methodology is based on the change detection technique, applied to a series of measurements over a three-year period (2015 to 2018). The algorithm described here as “Soil Moisture Estimations from the Synergy of Sentinel-1 and optical sensors (SMES)” proposes different options, allowing information from vegetation densities and seasonal conditions to be taken into account. The output from this algorithm is a moisture index ranging between 0 and 1, with 0 corresponding to the driest soils and 1 to the wettest soils. This methodology has been tested at different test sites (South of France, Central Tunisia, Western Benin and Southwestern Niger), characterized by a wide range of different climatic conditions. The resulting surface soil moisture estimations are compared with in situ measurements and already existing satellite-derived soil moisture ASCAT (Advanced SCATterometer) products. They are found to be well correlated, for the African regions in particular (RMSE below 6 vol.%). This outcome indicates that the proposed algorithm can be used with confidence to estimate the surface soil moisture of a wide range of climatically different sites. View Full-Text
Keywords: change detection algorithm; Sentinel-1; soil moisture; MODIS; ASCAT; Sentinel-2 change detection algorithm; Sentinel-1; soil moisture; MODIS; ASCAT; Sentinel-2
►▼ Show Figures 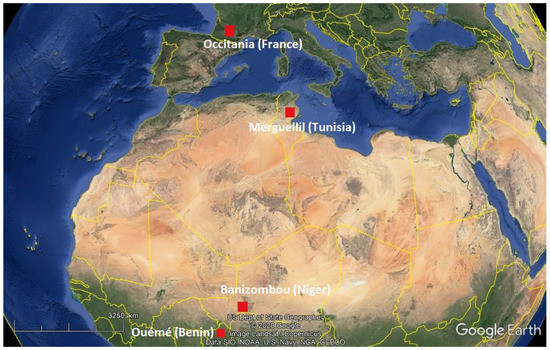