The mass loss of the Greenland Ice Sheet (GrIS) has implications for global sea level rise, and surface meltwater is an important factor that affects the mass balance. Supraglacial lakes (SGLs), which are representative and identifiable hydrologic features of surface meltwater on GrIS, are a means of assessing surface ablation temporally and spatially. In this study, we have developed a robust method to automatically extract SGLs by testing the widely distributed SGLs area—in southwest Greenland (68°00′ N–70°00′ N, 48°00′ W–51°30′ W), and documented their dynamics from 2014 to 2018 using Landsat 8 OLI images. This method identifies water using Convolutional Neural Networks (CNN) and then extracts SGLs with morphological and geometrical algorithms. CNN combines spectral and spatial features and shows better water identification results than the widely used adaptive thresholding method (Otsu), and two machine learning methods (Random Forests (RF) and Support Vector Machine (SVM)). Our results show that the total SGLs area varied between 158 and 393 km2 during 2014 to 2018; the area increased from 2014 to 2015, then decreased and reached the lowest point (158.73 km2) in 2018, when the most limited surface melting was observed. SGLs were most active during the melt season in 2015 with a quantity of 700 and a total area of 393.36 km2. The largest individual lake developed in 2016, with an area of 9.30 km2. As for the elevation, SGLs were most active in the area, with the elevation ranging from 1000 to 1500 m above sea level, and SGLs in 2016 were distributed at higher elevations than in other years. Our work proposes a method to extract SGLs accurately and efficiently. More importantly, this study is expected to provide data support to other studies monitoring the surface hydrological system and mass balance of the GrIS. View Full-Text
Keywords: supraglacial lakes; Convolutional Neural Networks (CNN); Landsat 8 OLI images; morphological and geometrical algorithms; change detection supraglacial lakes; Convolutional Neural Networks (CNN); Landsat 8 OLI images; morphological and geometrical algorithms; change detection
►▼ Show Figures 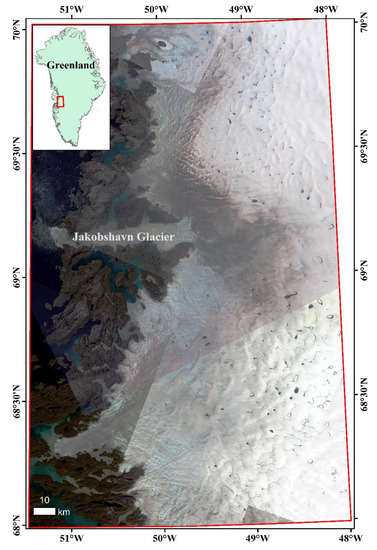