An implementation of bias correction and data assimilation using the ensemble Kalman filter (EnKF) as a procedure, dynamically coupled with the conceptual rainfall-runoff Hydrologiska Byråns Vattenbalansavdelning (HBV) model, was assessed for the hydrological modeling of seasonal hydrographs. The enhanced HBV model generated ensemble hydrographs and an average stream-flow simulation. The proposed approach was developed to examine the possibility of using data (e.g., precipitation and soil moisture) from the European Organisation for the Exploitation of Meteorological Satellites (EUMETSAT) Satellite Application Facility for Support to Operational Hydrology and Water Management (H-SAF), and to explore its usefulness in improving model updating and forecasting. Data from the Sola mountain catchment in southern Poland between 1 January 2008 and 31 July 2014 were used to calibrate the HBV model, while data from 1 August 2014 to 30 April 2015 were used for validation. A bias correction algorithm for a distribution-derived transformation method was developed by exploring generalized exponential (GE) theoretical distributions, along with gamma (GA) and Weibull (WE) distributions for the different data used in this study. When using the ensemble Kalman filter, the stochastically-generated ensemble of the model states generally induced bias in the estimation of non-linear hydrologic processes, thus influencing the accuracy of the Kalman analysis. In order to reduce the bias produced by the assimilation procedure, a post-processing bias correction (BC) procedure was coupled with the ensemble Kalman filter (EnKF), resulting in an ensemble Kalman filter with bias correction (EnKF-BC). The EnKF-BC, dynamically coupled with the HBV model for the assimilation of the satellite soil moisture observations, improved the accuracy of the simulated hydrographs significantly in the summer season, whereas, a positive effect from bias corrected (BC) satellite precipitation, as forcing data, was observed in the winter. Ensemble forecasts generated from the assimilation procedure are shown to be less uncertain. In future studies, the EnKF-BC algorithm proposed in the current study could be applied to a diverse array of practical forecasting problems (e.g., an operational assimilation of snowpack and snow water equivalent in forecasting models). View Full-Text
Keywords: distribution derived transformation; ensemble Kalman filter coupled with bias correction; precipitation and root zone soil moisture index; H-SAF products distribution derived transformation; ensemble Kalman filter coupled with bias correction; precipitation and root zone soil moisture index; H-SAF products
►▼ Show Figures 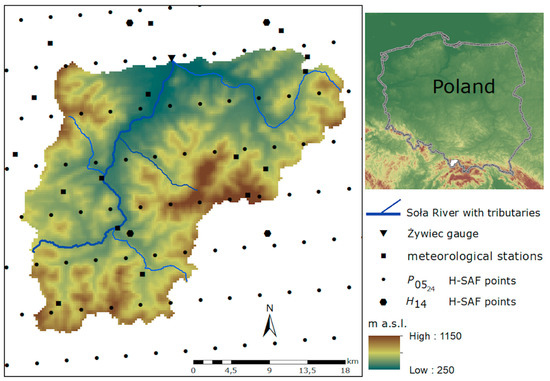