Climate and Land Use Influences on Bacteria Levels in Stormwater

A comprehensive parametric analysis was conducted to evaluate the influence of the green roof design parameters on the thermal or energy performance of a secondary school building in four distinctively different climate zones in North America (i.e., Toronto, ON, Canada; Vancouver, BC, Canada; Las Vegas, NV, USA and Miami, FL, USA). Soil moisture content, soil thermal properties, leaf area index, plant height, leaf albedo, thermal insulation thickness and soil thickness were used as design variables. Optimal parameters of green roofs were found to be functionally related to meteorological conditions in each city. In terms of energy savings, the results showed that the light-weight substrate had better thermal performance for the uninsulated green roof. Additionally, the recommended soil thickness and leaf area index for all four cities were 15 cm and 5 respectively. The optimal plant height for the cooling dominated climates is 30 cm and for the heating dominated cities is 10 cm. The plant albedo had the least impact on the energy consumption while it was effective in mitigating the heat island effect. Finally, unlike the cooling load, which was largely influenced by the substrate and vegetation, the heating load was considerably affected by the thermal insulation instead of green roof design parameters. View Full-Text
Keywords: green roof; energy performance; low impact development; heat island effect green roof; energy performance; low impact development; heat island effect
►▼ Show Figures 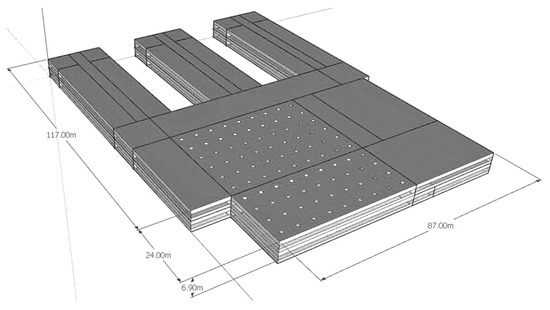