Rural Piped-Water Enterprises in Cambodia: A Pathway to Women’s Empowerment?

Water-permit systems are widely used across Africa as a blanket requirement for small and micro irrigation enterprises, as well as large enterprises. The present study aimed to, first, further understand the implications of permit systems for both the most vulnerable and the state, and, second, based on the findings, identify options for pro-poor water legislation that also meet the water governance requirements of the state. The growing recognition of the importance of farmer-led irrigation development for food security across the continent underlines the importance of these questions. Focusing on Kenya, Malawi, South Africa, Uganda, Zimbabwe, and other African countries, we found that permit systems criminalized instead of protected the water rights of small-scale farmers. Moreover, little if any attention is paid to the logistical burdens and costs to the state of implementing such systems relative to the intended revenue generation. As many small-scale farmers in Africa were found to operate under customary land and water tenure systems, the study proposes a hybrid system of water rights that formally recognizes such practices, along with the use of permits, including enforcement of conditions for large users, to serve the interests of both the state and small-scale farmers. View Full-Text
Keywords: water law; permits; customary; legal pluralism; hybrid water rights; irrigation; Africa water law; permits; customary; legal pluralism; hybrid water rights; irrigation; Africa
►▼ Show Figures 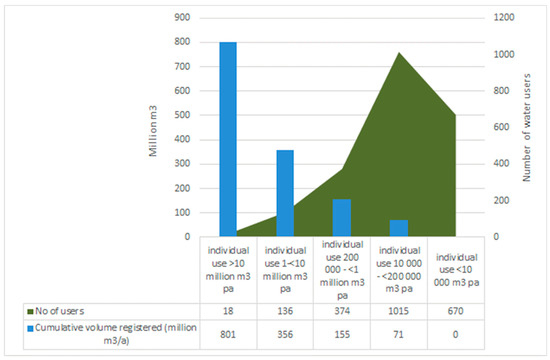