Evaluation of Mercury Transformation and Benthic Organisms Uptake in a Creek Sediment of Pearl River Estuary, China
Next Article in Special Issue

The introduction of non-native species and human-altered habitats are currently the main threats to freshwater ecosystems. Due to predation and competition, biological invaders can cause extinctions and imperil the status of native species, and this phenomenon is enhanced by habitat alteration, for example, dam construction. In addition to river fragmentation caused by dam construction, the impact of non-native species migrating from reservoirs on native assemblages in their tributaries should be considered from a long-term perspective. The present study focused on asp (Leuciscus aspius), an artificially introduced piscivorous cyprinid that became established in the Lipno Reservoir (Czech Republic). Asp regularly occur in a tributary, the Vltava River, where twenty-five individuals were captured, radio-tagged, and tracked for five consecutive years. Asp occurrence in the tributary was highest during spring due to the upstream migration of spawning fish, and this was interconnected with a movement activity peak in March when the temperature reached 6 °C. The fish migrated a maximum distance of 31 km, and the probability of asp occurrence in the tributary was sex-dependent, with more females than males. Some individuals occupied the Vltava River not only for spawning but remained until the temperatures dropped below 10 °C. This study shows how non-native predators use reservoirs for wintering but feed and spawn in tributaries. View Full-Text
Keywords: fish; non-native species; biological invasion; radio telemetry; migration; sex-dependent; homing fish; non-native species; biological invasion; radio telemetry; migration; sex-dependent; homing
►▼ Show Figures 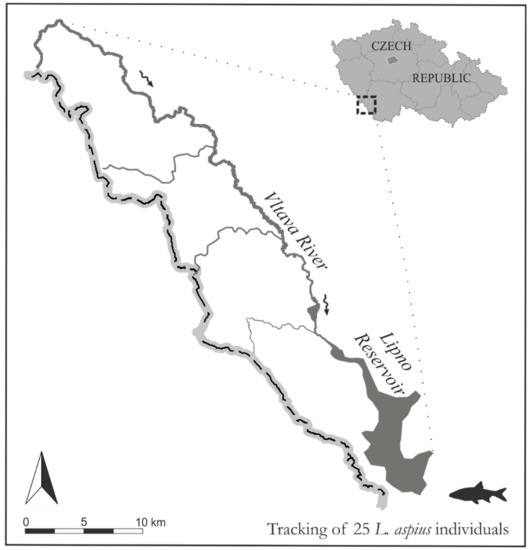