Identification of the Invasive Form of Corbicula Clams in Ireland

The basket clam genus, Corbicula, commonly known as the Asian clam, has become one of the most internationally high-profile and widespread aquatic invasive species. This genus is now considered to comprise a polymorphic species complex. The international invasion of Corbicula is characterised by four lineages, each fixed for one morphotype, genotype and haplotype combination: the American form (A) and European round form (R), the American form (C) and European saddle from (S), American form B, form round light colour (Rlc) and an intermediate between forms R and S known as Int. We investigated the genetic and morphometric makeup of each Irish population in order to establish which invasive lineages were present so as to identify the number of introductions to Ireland. A combination of morphometric, mitochondrial cytochrome oxidase subunit I (mtCOI) gene analysis and microsatellite markers were used to determine the invasive form at each Irish site. All Irish Corbicula samples conformed morphometrically to the invasive form A/R. All mtCOI sequences retrieved for 25 Irish individuals were identical to the international A/R form, while microsatellite markers again showed a common clustering with the international A/R forms of Corbicula. The combined approach of morphometries, total genomic DNA and microsatellite markers indicate only one form of Corbicula invaded Ireland; the international A/R form. View Full-Text
Keywords: Veneroida; biological invasion; Ireland; mtCOI; microsatellites; morphology Veneroida; biological invasion; Ireland; mtCOI; microsatellites; morphology
►▼ Show Figures 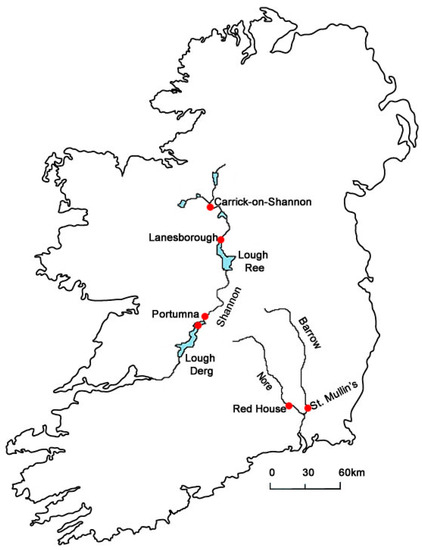