Most streams and rivers are groundwater-influenced systems [1,2]. Groundwater commonly upwells into surface waters at the hyporheic zone [3,4], which influences the physical and biotic characteristics of surface waters substantially [5,6,7,8]. The importance of groundwater to surface lotic ecosystems has been documented extensively, with most of the work focusing on distinct functions of the upwelling zone. Upwelling zones have been observed to have more favorable conditions for many organisms, including stable temperature and flow conditions as well as higher concentrations of dissolved nutrients [9,10]. Consequently, upwelling zones generally harbor higher biodiversity and more specialized biotic assemblages compared with other lotic environments [11,12]. The upwelling zone also serves as a refuge for lotic organisms to survive adverse environmental conditions such as extreme temperatures, floods, and stream drying [13,14]. A handful of studies have estimated the ecological impact of groundwater discharge for organisms in downstream reaches; however, findings are equivocal. Some studies demonstrate that important ecological characteristics, such as primary production and biodiversity, of downstream reaches benefit from groundwater inputs [15]. Further, coldwater fish have been confirmed to use groundwater-fed reaches as a thermal refuge during warming periods [16,17]. In contrast, other studies did not find significant groundwater effects for aquatic organisms [18,19].
Study duration is likely a major reason underlying variation in the reported reach-scale physical and biotic effects attributed to groundwater discharge. Most studies have evaluated groundwater effects over short time scales (usually never exceeding two years) and without the adequate characterization of the changes in seasonal patterns and processes [2,16,18,20]. Since the influence of groundwater for lotic ecosystems may vary remarkably among seasons and years [21,22], inconsistent results may be expected if study designs do not adequately account for this temporal variation. Moreover, short-term studies often cannot establish accurate or meaningful quantitative relationships between measured variables due to limited data. This limitation hampers mechanical exploration of pathways describing how groundwater influences surface waters. Therefore, studies of longer duration and with a more intensive survey effort are needed for exploring long-term and quantitative effects of groundwater discharge on downstream ecosystems, which will be valuable for a better understanding of groundwater–surface water interactions.
Short-term studies may also fail to accurately characterize important groundwater effects on stream physicochemical conditions. For instance, stable water temperature and flow conditions are key features of groundwater-influenced stream reaches, and these conditions may mitigate temporal fluctuations of water temperature and flow in downstream reaches [23]. However, due to short durations, many studies only measure changes in the magnitude of downstream water temperature or flow (i.e., the incremental deviation from the average conditions caused by groundwater inputs) [24,25]. Importantly, other widely used regime descriptors for any continuous phenomena, including variability (temporal fluctuations across regular time intervals), frequency (the number of events occurring at a certain magnitude or exceedance), timing (dates that particular events occur), and predictability (the reliability of event recurrence), have been poorly documented [26,27]. Consequently, it is unclear if or how groundwater can change other aspects of temperature and flow regimes other than the response magnitude in downstream reaches. Such knowledge has ecological value because the magnitude, variability, frequency, timing, and predictability are all important aspects influencing lotic ecological structure and function [28,29].
In the present study, four connected reaches in a Chinese Karst stream were surveyed continuously for 72 months, one of which is known to receive direct groundwater inputs. We monitored water temperature, discharge, and benthic algal biomass (represented by Chlorophyll a [Chl. a] concentrations) to evaluate how groundwater discharge affects these important physical and biotic components of lotic ecosystems. Benthic algae are a high-quality food source in streams and can be the main energy source to the aquatic food web [30,31]. Water temperature and discharge are commonly influenced by groundwater discharge [9,10] and are also major drivers of the temporal dynamics of benthic algal biomass [32,33]. Our main objective was to characterize the water temperature and discharge regimes for each reach. Further, we assessed reach-specific relationships between benthic Chl. a concentrations and water temperature as well as discharge. We tested two hypotheses: the reach most affected by groundwater will have (1) milder water temperature and flow regimes and (2) weaker influences of water temperature and flow on benthic algal biomass dynamics. Support for these two hypotheses will provide evidence that groundwater has an important influence on temporal dynamics of adjacent downstream reaches in the karst stream.

We conducted the study on the Nan River, located in Shengnongjia (31,015′–31,075′ N, 109,056′–110,058′ E), the western mountainous region in Hubei province of China. Elevation in this region varies from 420 to 3015 m (with a mean elevation >1500 m), resulting in an altitudinal climate gradient. The annual mean air temperature ranges from 7.1 °C in the western region to 14.5 °C in the eastern region, with the coldest and warmest months in January and July, respectively [34]. The annual precipitation commonly varies between 800 and 2500 mm, in which more than 85% of rainfall occurs in April to October with December to February accounting for <8% [34]. Karst terrain is a typical geomorphological characteristic in Shengnongjia where ~30% of bedrock is limestone. Due to the high solubility of this type of rock, there are enormous underground rivers, karst caves, swallow holes, groove, and springs in this region [34,35].
We surveyed four reaches in the headwaters of Nan River (Figure 1). The streambed substrate is dominated by gravels, pebbles, and cobbles, with bedrock of limestone [34]. Sheng Nong Yuan (SNY) and Da Long Tan (DLT) are two first-order reaches with elevation of 2320 m and 2220 m, respectively (Table 1). SNY is located in the mainstream, while DLT is in an adjacent tributary (Figure 1). Swallow holes are common along the 1-km-long stream channel just downstream of the confluence of DLT tributary (Figure 1). Surface water seeps into swallow holes, leading to reduced flow in the reaches immediately downstream. The downwelling reaches (i.e., sections with swallow holes), which were not surveyed in this study, have been observed to dry up from late December to February when rainfall is minimal (personal observation). Groundwater recharges to the surface channel through discrete springs in reaches downstream of the swallow holes and ensure sufficient base flow to maintain surface water during dry periods. Hong Shi Zi (HSZ) is a second-order downstream reach approximately 2 km downstream from the confluence point of DLT with an elevation of 1950 m. Several visible springs can be observed along this reach; indicating that this reach is influenced by groundwater discharge. Ji Zi Gou (JZG) is another second-order reach about 4 km downstream HSZ, located at an elevation of 1820 m. All the four study reaches have permanent surface flow. The DLT tributary reach had the narrowest wetted width and the shallowest water depth during the study (Table 1). As for the three mainstream reaches, mean wetted width and water depth both increased longitudinally among reaches from SNY to JZG. All the four reaches had closed riparian canopy and low degree of human disturbance because of effective protection of this region.

The four reaches were surveyed monthly from July 2011 to June 2017; however, data was not collected in April and July of 2015 due to large floods. We monitored stream discharge, air temperature, and water temperature for each reach on all sampling occasions. Mean reach discharge was calculated from measurements at three randomly selected cross-sections along a 50-m reach. At every 50-cm interval along each cross-section, flow velocity was measured using a Global Water Flow Probe Hand-Held Flowmeter (Xylem Inc., White Plains, NY, USA) and water depth was recorded using a tape. The wetted width of each cross section was also measured with a tape. Discharge (m3 s−1) was calculated using the velocity-area method for each cross-section [36]. Air and water temperature were measured and averaged from the same three cross-sections with an YSI Pro Plus multimeter (YSI Inc., Yellow Springs, OH, USA). Although we did not sample all the reaches at the same time on each occasion, fieldwork in all reaches was completed within a 2 to 3-hour period to minimize variation due to time of sampling.
Benthic algae were sampled at the same aforementioned three cross-sections for each reach during each occasion. Five stones of 10–20 cm diameter were randomly selected at each cross-section, with a total of 15 stones for each reach. We defined the sampling area for each stone with a circular lid of 2.7 cm radius. The stone surface within the lid was vigorously scrubbed using a nylon brush and rinsed 3–4 times with distilled water. All subsamples from the same cross-section were combined into one composited sample and the volume was recorded [37]. Algal sample was passed through a glass fiber filter (Whatman GF/F) in the field and kept dark and cool. In the laboratory chlorophyll a was extracted with 90% acetone and absorbance values at 630, 645, 665 and 750 nm were measured using a Shimadzu UV-1601 spectrophotometer (Shimadzu Corp., Kyto, Japan), following a standard analysis procedure [38]. Benthic Chl. a concentration for each cross-section was calculated as mg per stone surface area (mg m−2). Chl. a concentration for each reach was averaged from the three cross-section replicates.

3.1. Effects of Groundwater on Stream Water Temperature and Discharge Regimes

3.2. Effects of Groundwater on Associations between Chl. a Dynamics, Water Temperature, and Discharge

We thank Xiaoyu Dong, Tingting Sun, Ting Tang, Ze Ren, Fengzhi He, and Yang Li for assistance with fieldwork. We are grateful to Andrew Boulton and Naicheng Wu for valuable comments on the draft. 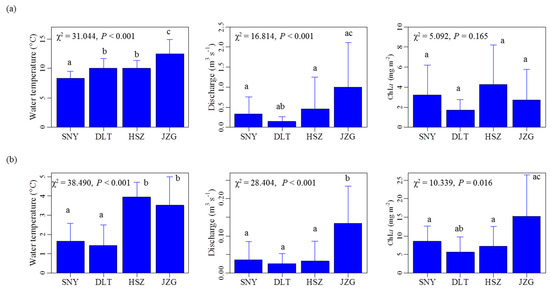 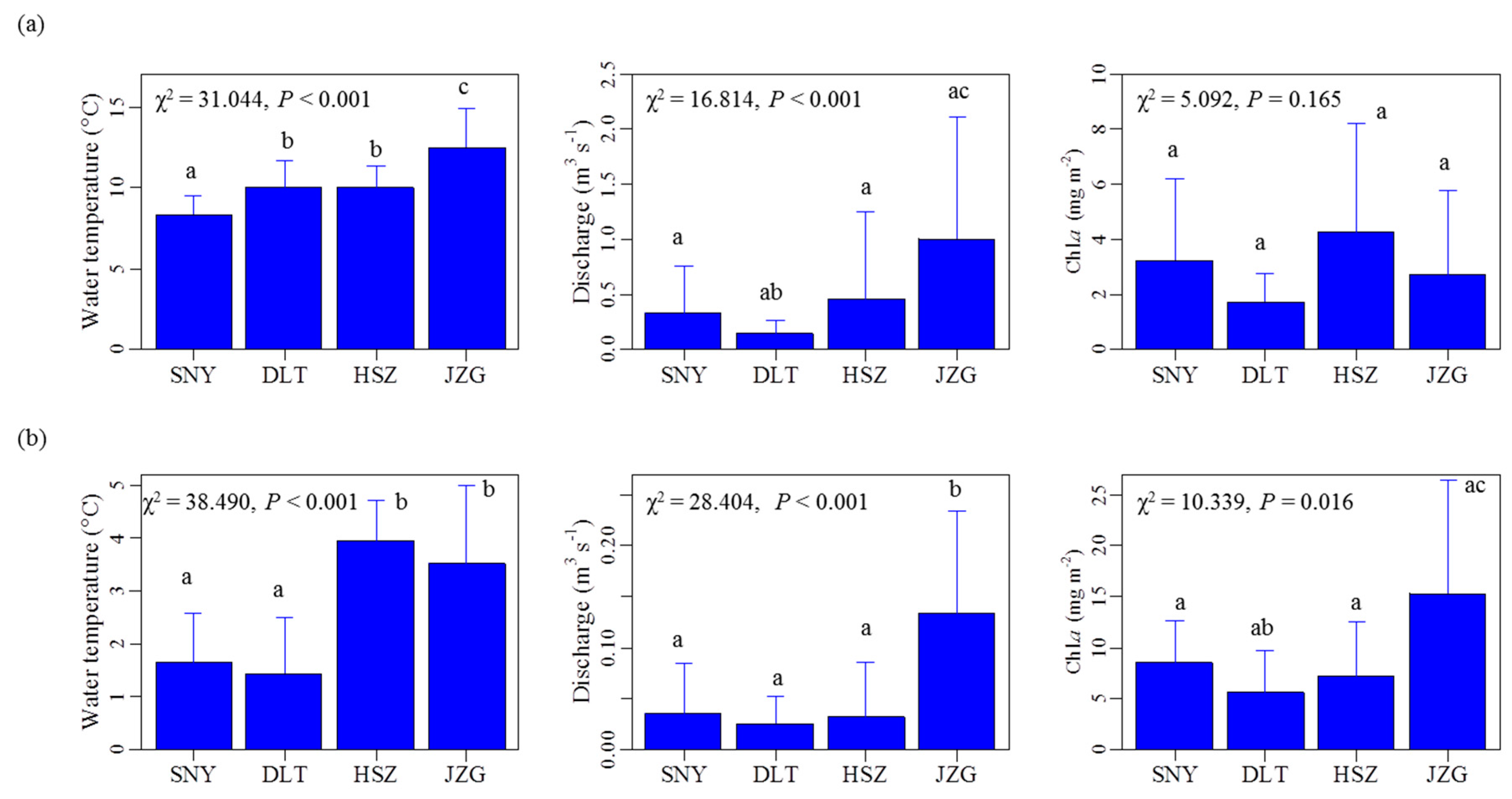 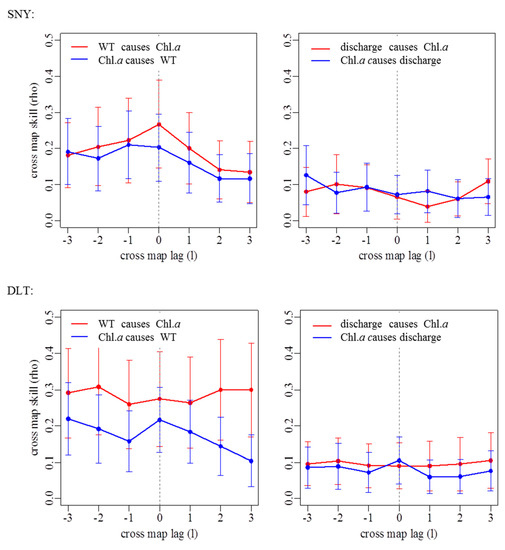 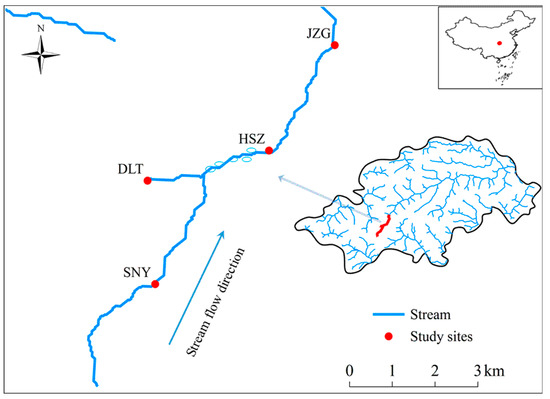 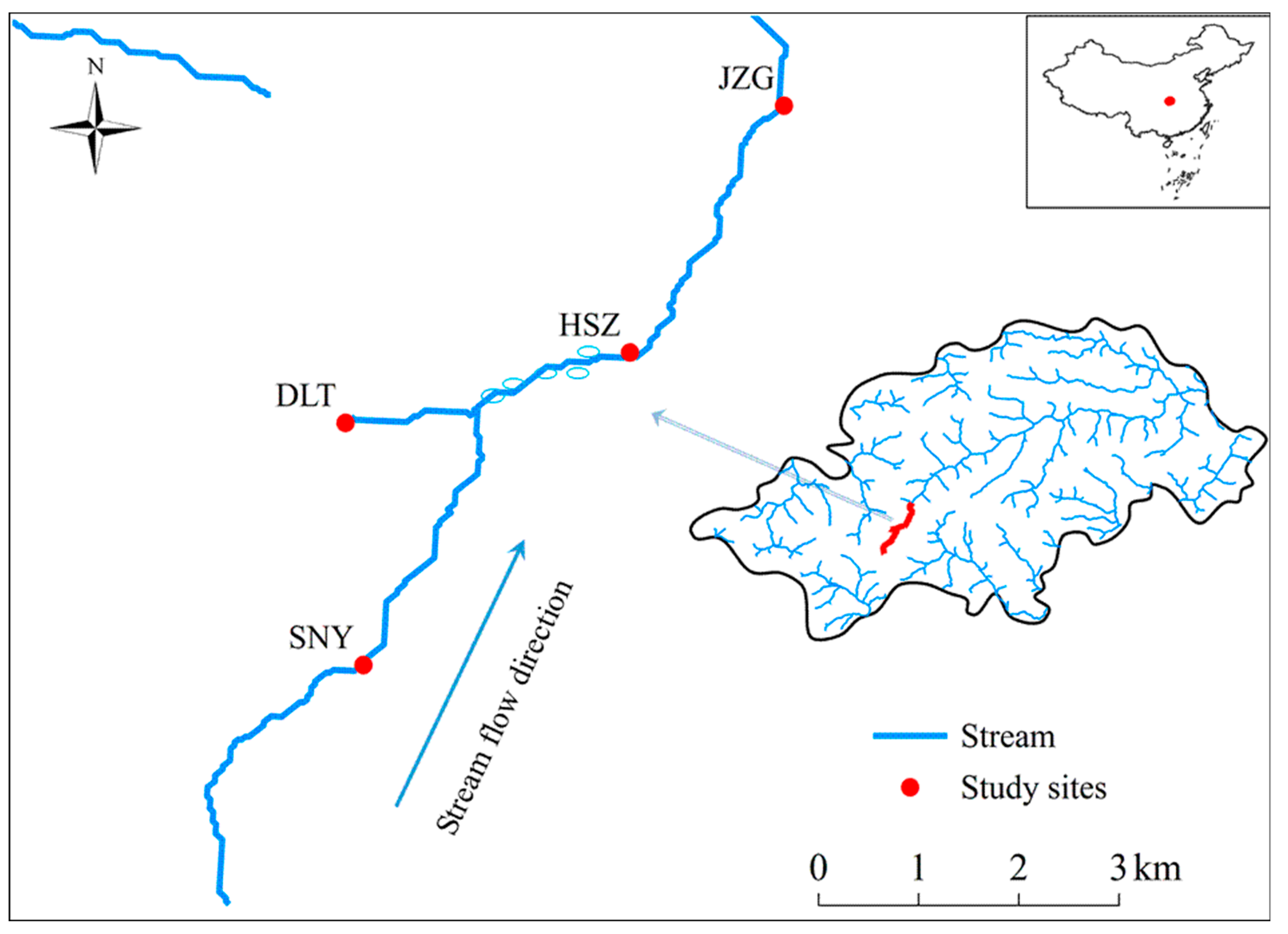 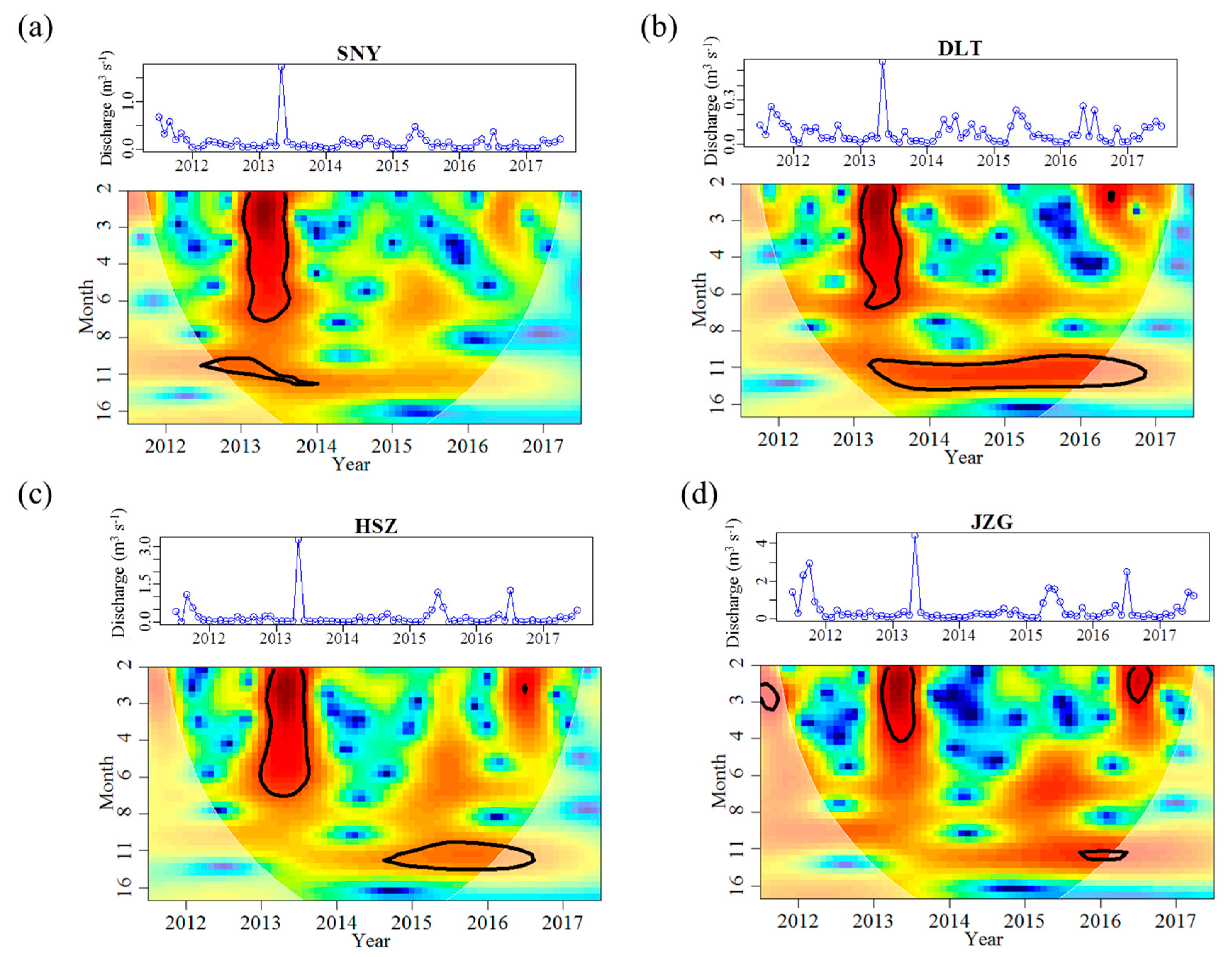 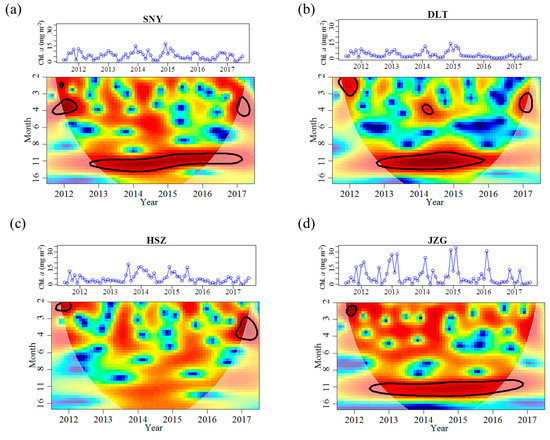