The hydrology of coastal lakes differs significantly from that of inland water bodies due to the influence of the neighboring sea. Observed climatic changes are expected to enhance the effect of the sea on coastal lake ecosystems, which makes research on sea–lake interactions even more significant. In this study, on the basis of maximum annual and monthly values of water level, dependencies among the water levels of six lakes located along the southern coast of the Baltic Sea in Poland, and the Baltic Sea water levels were analyzed. First, the Spearman rank correlation and the linear regression method were applied. Then, selected copulas were used to find joint distributions of the studied time series. In the next stage, the degrees of synchronous and asynchronous occurrences of maximum water levels in lakes and the sea were calculated. The study revealed that correlations between the maximum annual water levels in coastal lakes and in the Baltic Sea in the selected gauge stations were very strong and statistically significant. These results were confirmed by a synchronicity analysis carried out with the help of a copula function. The highest relationship was detected in the case of Lake Resko Przymorskie (correlation coefficient 0.86, synchronicity 75.18%), while the lowest were observed in Lakes Jamno (0.62 and 58.20%, respectively) and Bukowo (0.60 and 56.82%, respectively). The relation strength between maximum water levels of the sea and coastal lakes may increase in the future due to sea level rises caused by climate warming.
Keywords: time series analysis; coastal lakes; Baltic Sea; water level; Poland; copula; surface water time series analysis; coastal lakes; Baltic Sea; water level; Poland; copula; surface water

The analysis of correlations of water levels in coastal lakes with water levels in the sea was based on the maximum annual and monthly values of water levels in lakes and the sea. They were calculated based on daily values of water levels from the years 1976–2015, which were obtained from the collections of the Institute of Meteorology and Water Management, National Research Institute. Due to the availability of measurement data, in the case of Lake Resko Przymorskie, the analysis covered the multiannual period 1981–2015. The analysis concerned 6 selected coastal lakes where observations of water levels are conducted, namely Resko Przymorskie (station Dźwirzyno), Jamno (station Unieście), Bukowo (station Bukowo Morskie), Gardno (station Gardna Wielka), Łebsko (station Izbica), Druzno (station Żukowo), and 4 water gauge stations in the Baltic Sea (Kołobrzeg, Ustka, Łeba, and Tolkmicko). The water gauge stations in the sea were assigned to lakes based on location. Each lake was ascribed to the nearest water gauge station on the sea (Figure 1).
Lakes Resko Przymorskie, Jamno, Bukowo, Gardno, and Łebsko are connected to the sea by means of canals, simultaneously constituting the mouth sections of rivers. Lake Jamno is connected to the sea by means of the Jamno Canal, Bukowo through the Szczucza Canal, Gardno through the Łupawa Canal, Łebsko through the Łeba Canal [32], and Lake Resko Przymorskie through the Resko Canal [48]. Lake Druzno, located in the east of the study area, has a connection to the Baltic Sea through the Vistula Lagoon. The analyzed lakes are shallow, with a mean depth of 1.2 m to 1.8 m (Table 1), but belong to the group of the largest lakes in Poland in terms of surface area. They are characterized by high values of mean, maximum, and extreme annual water level amplitudes. Extreme annual amplitudes in the lakes in the analyzed multiannual period exceed 100 cm. They are the highest in Lake Resko Przymorskie (200 cm) and the lowest in Lake Łebsko (127 cm) (Table 2). The highest water level amplitudes are observed in Kołobrzeg (Table 2). The lowest mean and maximum annual amplitudes occur in Łeba (132 cm and 151 cm), and the most extreme amplitudes are in Ustka (188 cm).
The variability coefficient of daily water levels varies from 0.036 in Lake Łebsko to 0.044 in Lake Bukowo. In the case of the Baltic Sea, the variability coefficient in all stations is 0.041 (Table 2).

Next, the Spearman rank correlation and the linear regression method were applied in the analysis of correlations of water levels in the lakes with water levels in the sea (similarly to the case of Pearson’s correlation coefficient). Spearman’s rank correlation test is a nonparametric test applied in analyses of correlations between quantitative parameters in the case of a low number of observations or a statistic distribution deviating from normal. Then, statistical significance was analyzed at a level of p = 0.05, p = 0.01, and p = 0.001. A statistical assessment of significance of correlation coefficients was performed by means of statistic t:
Statistic t has a Student distribution with n − 2 degrees of freedom.

2.2.3. Application of the Copula Theory

The concept of copula was introduced by Reference [51], which defined copula as a joint distribution function of standard uniform random variables. Modeling joint distribution using copula relaxes the restriction of traditional flood frequency analysis by selecting marginals from different families of probability distribution functions for flood characteristics [52].
First, the best matching statistical distributions were selected for the analyzed data series. The following distributions reflect the maximum values in series of hydrological data: Weibull, Gamm, Gumbel, and log-normal [53]. Parameters of the distributions were estimated by means of the highest probability method [54]. For the purpose of an assessment of the goodness of fit of a given distribution in the data series, the Akaike information criterion (AIC) was applied [55], which was calculated from the following formulas:
AIC = Nlog (MSE) + 2(no. of fitted parameters),
where MSE is the mean square error, and N is the sample size, or
AIC = −2log(maximum likelihood for model) + 2(no. of fitted parameters).
The best model is the one that has the minimum AIC value [55].
In the next step, the copula method was used to construct the joint distribution of lake and sea stages. In general, a bivariate Archimedean copula can be defined as [56] where the θ subscript of copula C is the parameter hidden in the generating function , and is a continuous function called a generator that strictly decreases and is convex from I = [0,1] to [0, (0)].
The Archimedean copula family is often applied in hydrological studies, for example in flood frequency analyses. It was found in References [57] and [58] that a copula-based flood frequency analysis performs better than a conventional flood frequency analysis, as joint distribution based on a copula fits the empirical joint distribution (i.e., from observed data using a plotting position formula) better than the established standard joint parametric distribution. Numerous successful applications of copula modeling have been achieved, most notably in survival analysis, actuarial science, and finance [52].
A large variety of copulas belong to the Archimedean copula family and can be applied when the correlation between hydrologic variables is positive or negative. The proofs of these properties have been reported by References [59] and [60]. For this reason, one-parameter Archimedean copulas, including the Clayton family, the Gumbel–Hougaard family, and the Frank family, were used in this study. The Gumbel–Hougaard and Clayton copula families are appropriate only for positively correlated variables, while the Frank family is appropriate for both negatively and positively correlated variables (Table 3).
where is Debye function, for any positive integer k,
The best fitted joint distribution was selected through comparison to the empirical joint distribution using the Akaike information criterion (AIC), as mentioned earlier.
For each compared pairs of series, based on previously calculated parameters of statistical distribution, 5000 hypothetical points were generated. They were used for the selection of the best fitted family of copulas for a given pair of series and then for the development of an appropriate copula. Based on empirical pairs of values for particular years and generated hypothetical points, graphs with probability curves (expressed in return periods) were developed (Figure 2).
The next stage involved a calculation of the degree of synchronicity (synchronous occurrence) and asynchronicity (asynchronous occurrence) of maximum water levels in lakes and the sea. For each pair of stations, probability curves at a level of 62.5% (once in 1.6 years), 37.5% (once in approximately 2.7 years), 20% (once in 5 years), 10% (once in 10 years), 2% (once in 50 years), 1% (once in 100 years), 0.5% (once in 200 years), and 0.2% (once in 500 years) are presented (Figure 2).
The obtained data were then analyzed based on probabilities of 62.5% and 37.5% [44]. Nine sectors were designated, representing different relations between probable maximum water levels. Based on generated points with a distribution imitating the shared distribution of values from comparable water gauge stations and their participation in particular sectors (Figure 2), 3 sectors with synchronous occurrences of maximum water levels were designated:
as well as 6 sectors with asynchronous occurrence:
where X = the values of x coordinates of generated points, Y = the values of y coordinates of generated points, S62.5% = the value of the maximum sea water level with a probability of exceedance of 62.5%, S37.5% = the value of the maximum sea water level with a probability of exceedance of 37.5%, L62.5% = the value of the maximum sea water level with a probability of exceedance of 62.5%, L37.5% is the value of the maximum sea water level with a probability of exceedance of 37.5%, WL = water level, LH = “low high”, MH = “mean high”, and HH = “high high”.
The percent contribution of points included in sectors 1, 5, and 9 permitted a determination of the degree of synchronicity of maximum water levels between the two analyzed water bodies in a given time unit.
Synchronous and asynchronous occurrences of maximum water levels were determined through a determination of threshold values of probability ranges:
For example, the occurrence of LHWL in a given lake is a synchronous event if LHWL also occurs in the Baltic Sea in a given time unit, and it is asynchronous if MHWL or HHWL is recorded there.
The total contribution of synchronous and asynchronous events is always 100%.
The mathematical and statistical processing of analysis results employed statistical procedures included in the following software programs: Excel (Microsoft), Statistica (TIBCO Software Inc.), and RStudio. The implementation of the graphic form employed QGIS (3.6.2. Noosa) and Publisher (Microsoft) software.

Synchronicity for maximum monthly water levels was calculated for Lake Jamno and stations in Kołobrzeg and for Lake Gardno and a station in Ustka (Table 7). The lakes were selected because the results of correlation and synchronicity pointed to their different relations with maximum annual sea water levels (Table 6).
The averaged synchronicity of maximum monthly water levels in Lake Jamno and the sea (55.56%) was inconsiderably lower than the synchronicity of maximum annual water levels in these water bodies (58.20%). Values above the average were obtained for the period from November to March. In the remaining months, they were below the average. In April, August, and October, the occurrence of asynchronous situations was more probable than synchronous ones. The highest synchronicity was characteristic of February and was slightly lower in December, and the lowest was in April. Concerning the correlation coefficient, the same pattern was observed (Figure 5).
The analysis of the results of synchronicity and asynchronicity for the pair Lake Jamno–station Kołobrzeg in particular sectors (Table 7; compare Figure 2) showed that the highest probability (approximately 10%) of occurrence of the situation MHWLS–MHWLL occurred in February. The probability (approximately 28%) of occurrence of situation HHWLS–HHWLL was in January, and LHWLS–LHWLL was in December (approximately 27%).
Averaged synchronicity of maximum monthly water levels in Lake Gardno and the Baltic Sea (72.39%) was, unlike in the case of the correlations described earlier for Jamno, higher than the synchronicity of maximum annual water levels (65.92%, Table 7). The strongest correlations (>75% synchronicity) were determined for maximum water levels in November, January, February, March, and October (Table 7). Weaker correlations were particularly observed in the period from April to September, and the weakest, as in the case of Lake Jamno, was in April (62.00%). Unlike in the case of Lake Jamno, however, no month showed a prevalence of total shares in asynchronous sectors. In other months, the highest synchronicity values also occurred (MHWLS–MHWLL and HHWLS–HHWLL) in November (17.28% and 33.92%, respectively), and LHWLS–LHWLL in February (32.82%). 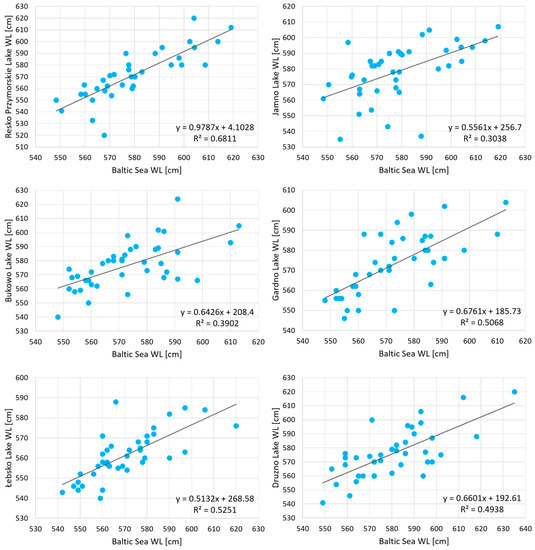