The paper identifies relationships between lake water levels and indices of macroscale atmospheric circulations: Arctic Oscillation (AO), North Atlantic Oscillation (NAO), East Atlantic (EA), and Scandinavian pattern (SCAND). Correlation coefficients between synchronous and asynchronous series of monthly water levels and 4 circulation indices were calculated. Based on Ward hierarchical grouping considering 156 correlation coefficients, the groups of lakes were designated due to the strength and term of relation of circulation indices with lake water levels. It was found that these links are not strong but noticeable. The strength of relationships varies in space and time, and the designated groups of lakes refer not only to the climatic diversity of the studied area, but also to some extent to the types of water levels regime. The observed relationships are the most important in the case of AO and NAO (particularly in winter period), and slightly weaker for EA and SCAND. The analysis used mean monthly water levels of 15 lakes in northern Poland from 1976–2015. View Full-Text
Keywords: lake water levels; teleconnections; indices of macroscale atmospheric circulations lake water levels; teleconnections; indices of macroscale atmospheric circulations
►▼ Show Figures 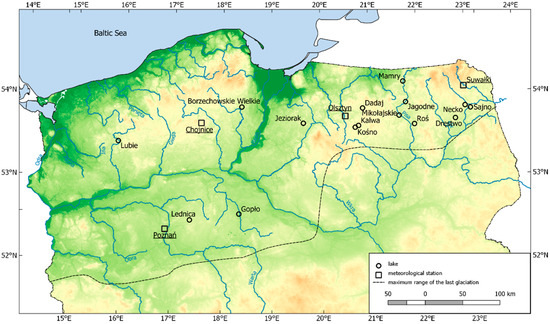