Characterization of the Agricultural Supply of Desalinated Seawater in Southeastern Spain

The increasing shortage of water for crop irrigation in arid and semiarid regions is encouraging the use of non-conventional resources. In the last decade, seawater desalination has consolidated its position as an alternative source to increase the supply for agricultural irrigation in Spain and Israel, where the farmers’ acceptance is progressively rising, despite the supply price being much higher than that of other conventional water sources. This article describes the current situation of desalinated seawater production and supply to agriculture in the southeast of Spain, and analyzes key questions such as its role in regional water planning, the infrastructure needed for conveyance and distribution, the energy requirements, the production and distribution costs, and the final price to farmers. The study is based on descriptive and quantitative data collected from desalination plants and irrigation district managers through technical questionnaires and personal interviews. The results show how seawater desalination is effectively alleviating the regional constraints in the irrigated agriculture supply, and why it is becoming strategic to maintaining food production and socioeconomic development. However, the high-energy requirements and associated costs in comparison with other water sources limit a more widespread use for agriculture, and for this reason desalinated water still only plays a complementary role in most irrigation districts. View Full-Text
Keywords: desalination; crop irrigation; energy consumption; water price; agriculture resilience desalination; crop irrigation; energy consumption; water price; agriculture resilience
►▼ Show Figures 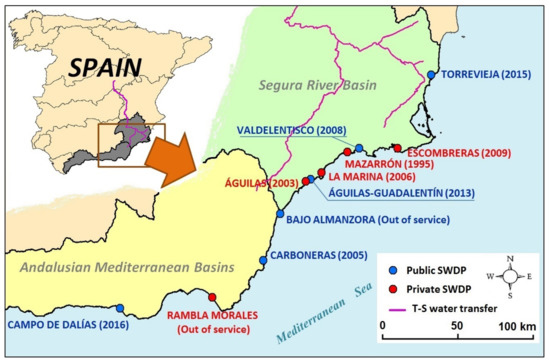