Hydrogeochemical Characteristics and the Suitability of Groundwater in the Alluvial-Diluvial Plain of Southwest Shandong Province, China
Previous Article in Journal 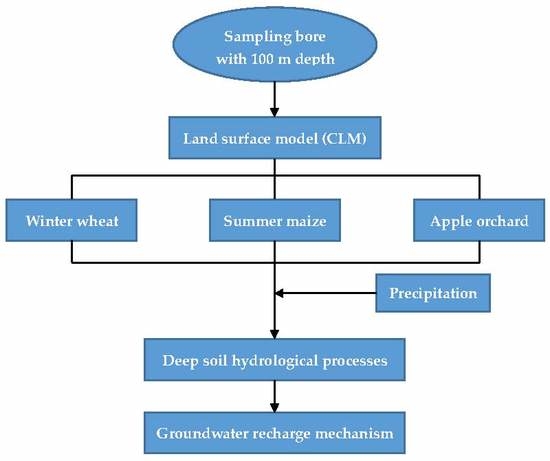 Our study site (Figure 1), which is located in the Wangdonggou watershed of Changwu in southern Loess Plateau of China (35°14′N, 107°41′E), is characterized by a thick soil layer with a silty loam texture and vertical stratified structure that developed on windblown dust deposits over millions of years [21,26,27]. The soil layer has relatively large porosity and it usually decreases with soil depth [28]. The soil water content is low and the groundwater table is large in the area [21]. Precipitation is easy to infiltrate into the loose and dry soil layer, especially in the loess tableland area, but it is difficult to recharge groundwater [21]. Runoff is difficult to generate and mainly yields under excess infiltration in the region. Although the topography is broken and diverse, winter wheat, summer maize, and apple tree are the main crops in Changwu. The previous two are both of shallow-rooted vegetation and the last one is of deep-rooted vegetation. The region has a continental monsoon climate, with a mean annual precipitation of 579 mm (averaged over 1960 through 2016), of which approximately 55% falls between July and September. The annual mean temperature is 9.2 °C, with 170 frost-free days. The main crops are summer maize and winter wheat. Summer maize grows from May to September, covering the rainy season, while winter wheat grows from October to the following June, which is just outside the rainy season. In 1985, apple orchards were introduced into the region, and by 2015 they had replaced about 50% of the farmland [29,30].
In 2015, a deep bore of 98 m was drilled in a wheat field where the groundwater table was found at a depth of about 94 m (Figure 1). The samples of undisturbed soil were collected every 20 cm from the bore, and soil texture, bulk density, volumetric soil water content, and saturated hydraulic conductivities were measured. These basic soil properties, along with measured root distribution, leaf area index, stem area index, and canopy height (top and bottom) of typical winter wheat were input into the CLM for hydrological simulations [21]. Based on the bore measurements, Shao et al. [21] modified the drainage, soil layers, and root distribution schemes in the Community Land Model (CLM) version 4.0 and simulated the soil water content and groundwater recharge. The model was validated with the measured vertical distribution of soil water content in the 98 m bore and the nearby groundwater table observations [21].

In the original version of CLM, the root system is described as the percentage of roots (biomass or root length density) distributed in each soil layer that does not change over the growing season. It is calculated with the two-parameter exponential function of soil depth (d) for 15 vegetation types [12,13,31]. Although the two parameters vary with the vegetation types, their root systems are mainly distributed in the soil zone <1.5 m depth. Monthly root distribution was used for shallow-rooted winter wheat and summer maize to explore the impact of rooting depth and associated growth on groundwater recharge. Based on our on-site observations (Figure 2 and Figure 3), the maximum rooting depths of winter wheat and summer maize are, respectively, 5 and 2 m, which are both deeper than that (1.5 m) implemented in CLM. Moreover, the root system is mainly distributed above 2 m in these two crop fields for most of the year, accounting for >95% of the total (Figure 2 and Figure 3). Therefore, the difference in rooting depth is neglected between the winter wheat and summer maize fields.
Apple trees have a much deeper root system than the winter wheat and summer maize and exhibit perennial growth in a semi-humid climate. The root distribution patterns of apple trees are largely affected by stand age and soil water content. Rather than adopt the exponential root distribution in CLM [12,13,31], we used measured root distributions of 15-year-old apple trees for our simulations with CLM (Figure 4).
In the revised model, the percentage of roots in each layer on any day during two adjacent months is calculated by linear interpolation to reflect the growth process. When assuming that R1(d) and R2(d) are the root distributions as a function of depth (d) on the dates t1 and t2 in the middle of the respective months, then the root distribution R(d) on date t between them can be calculated, as follows:

3.1. Effects of Precipitation and Rooting Depth on the Spatial and Temporal Distributions of Soil Water Content

3.2. Characteristics of Connected and Disconnected Recharge as Affected by Precipitation and Rooting Depth

3.3. Response of Connected and Disconnected Recharge to Precipitation

4.2. Interaction between Climate and Rooting Depth on Long-Term Average Recharge

The effect of rooting depth on groundwater recharge depends on whether the climate is relatively wet or dry. In a relatively wet period, such as 1919–1955 (Table 3), the groundwater recharge (1927–1963) that is generated by precipitation did not differ much among the three vegetation types (Figure 6 and Figure 7). This may be attributed to the low ET, which allowed for more precipitation to infiltrate the deep soil layer (Figure 6; Table 3). When compared with the earlier and later periods, the average annual ET rates over the period of 1919–1955 were reduced by approximately 9.7 and 26% in the winter wheat field, 10.3 and 26.5% in the summer maize field, and 16.4 and 34.1% in the apple orchard (Table 3). The relatively low ETs caused less soil water deficit and allowed for more precipitation to infiltrate the deep soil, forming groundwater recharge, even in the deep-rooted apple orchard (Figure 6 and Figure 7).
Furthermore, soil water storage within the shallow soil (<6 m) of the apple orchard may have been sufficient for plants to meet the ET demand because of the low ET. Therefore, the water infiltrating the soil below 6 m became groundwater recharge, resulting in little difference among the three vegetation types. For the opposite reasons (high ET and high soil water deficits), the effect of rooting depth on groundwater recharge was more pronounced in the other two periods.

The authors would like to acknowledge the sampling group for their hard work and the help from model group members. 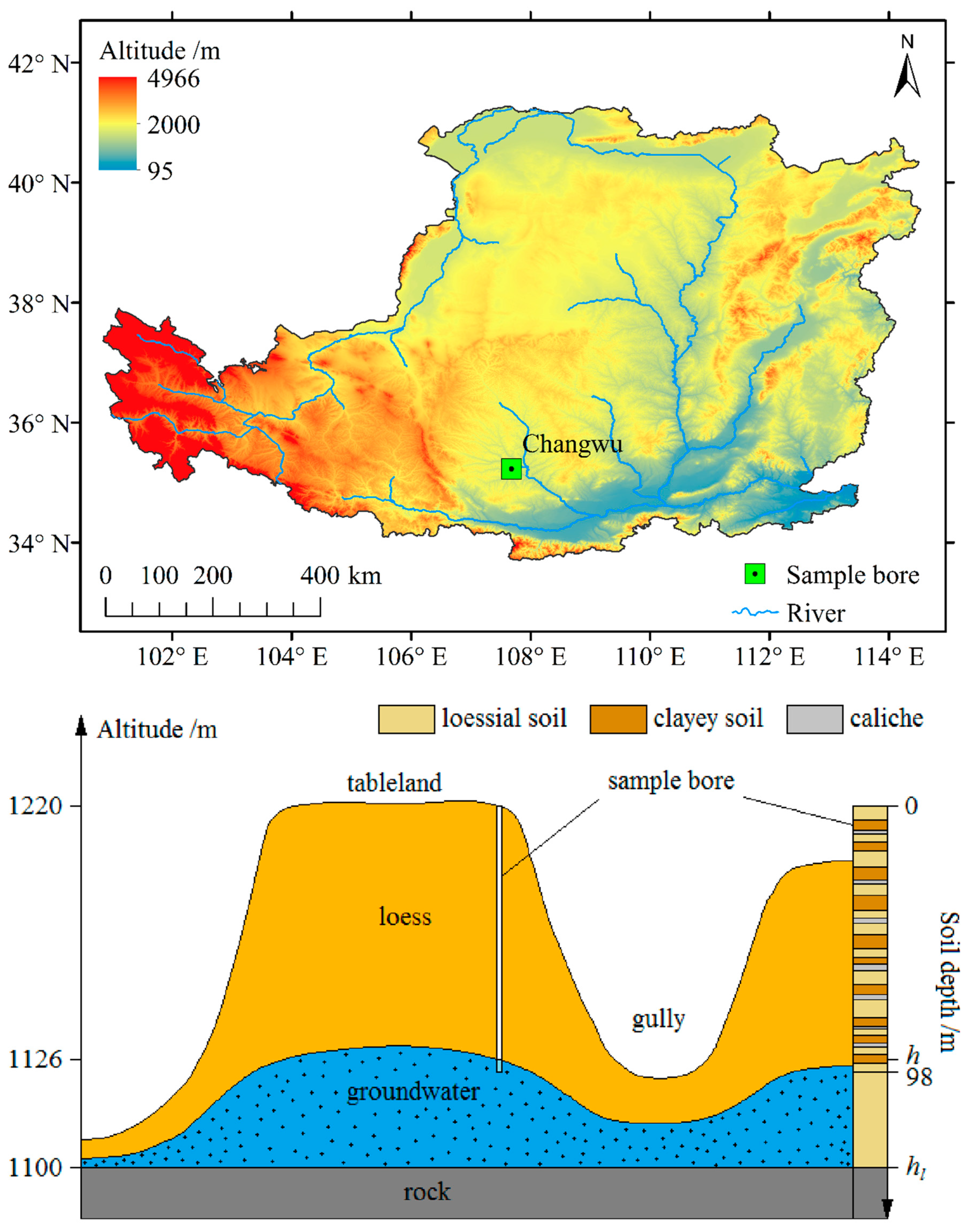 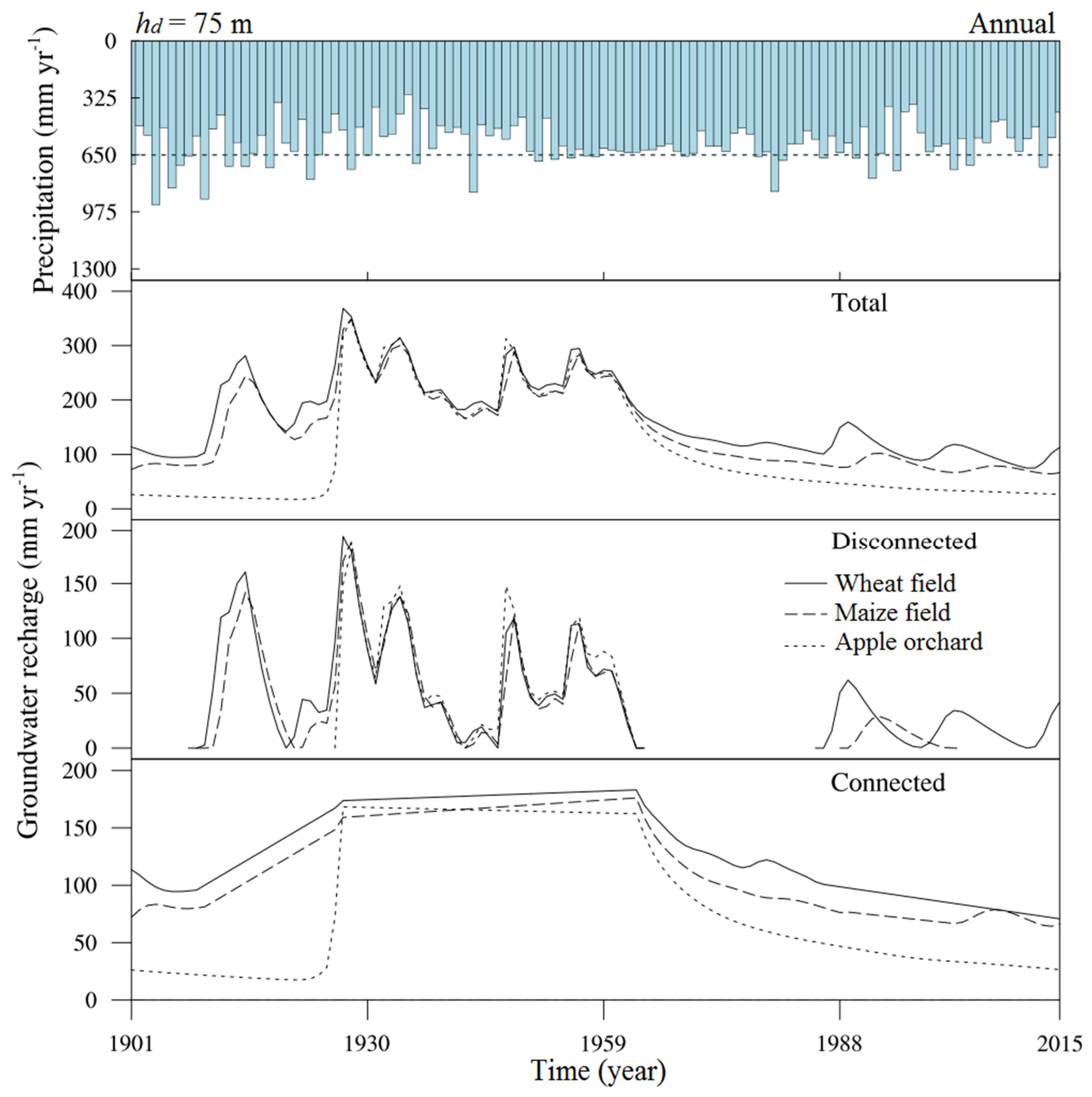