Many extreme weather events have happened in recent years. These are visible as regional climate disturbances, as well as changes on a global scale. Higher or lower air temperatures, longer or shorter winter periods, and droughts or intense precipitation events are all meteorological phenomena that are part of the ongoing climatic changes occurring in the world [1]. Such events and changes have happened naturally over the course of the history of the Earth, on a long timescale. However, recent climate changes have happened over an unusually short timescale due to the effects of humans on the environment. Thus, the concept of the Anthropocene has emerged to describe the time in which we are now living, and seems to be more and more appropriate [2,3].
All of the aforementioned changes in weather conditions are difficult to forecast because there are many factors that can affect the climate. Nonetheless, the future prognosis is for there to be successive increases in temperature and in the frequency of severe precipitation events in Europe [4,5], which will affect surface water temperatures of lakes, especially in spring and summer [6,7], as well as lead to a lack of ice, late ice formation, or early ice melting in lakes during winter [8,9,10,11]. The increases in precipitation events may enhance the hydration of catchment basins, influence the process of water runoff, and facilitate non-point delivery of biogenic compounds and organic carbon to lakes [12]. Consequently, the biotic elements in freshwater ecosystems will first respond through increases in the biomass of primary producers through the intensive development of phytoplankton and macrophytes, which leads to advanced eutrophication in lakes if it reaches very high amounts [12,13,14]. Hence, lakes are treated as valuable sentinels for detecting global changes, which in turn might have major direct and indirect effects on the biota of lakes [15].
The phytoplankton community in a lake is very sensitive to changes in abiotic parameters. This has been clearly shown in many previous studies concerning the global expansion of cyanobacterial blooms in lakes varying in trophic character, morphometry, hydrology, biogeography, and catchment properties [14,16,17,18]. Nonetheless, independently of a lake’s type and its morphometric properties, as well as whether studies were performed in natural habitats or in laboratory experiments, increased temperature appears to play the most important role in the occurrence of cyanobacterial blooms [5,18,19,20,21]. This is because of the high environmental plasticity of cyanobacteria and the features that give them a competitive advantage over other phytoplankton, such as their ability to remain buoyant in the water column through the use of gas vesicles, form mucilaginous colonies for slower sinking, use a wide portion of the light spectrum for photosynthesis, form nitrogen-fixing heterocysts, use diverse reproductive strategies, multiply quickly in water, and have low susceptibility to grazing pressure [22,23] or produce a wide spectrum of toxins [24]. All of these properties can help these blue-green algae to hamper the development of other phytoplankton species, especially in the face of extreme precipitation events or changes in air temperature that can cause increased nutrient inputs to the surface waters or affect the thermal regime in the water column. Nonetheless, in lakes in temperate zones, other phytoplankton groups, such as diatoms or mixotrophic flagellate species such as cryptomonads and dinoflagellates, are able to grow well or even outcompete cyanobacteria during the colder months of the year (autumn, winter, or spring) [25,26]. Winter is a very important period, which can affect limnological processes not only during winter but also in the following growing season. However, hydrobiological field work during cold winters with thick ice cover, extreme low temperatures, and sometimes heavy snowfall can be very difficult. Similarly, field work during mild winters on lakes devoid of ice but during unpleasant weather conditions, e.g., strong wind and wave action, low temperatures, or heavy rainfall can create difficulties for researchers [27]. Nevertheless, winter limnology has been increasingly recognised in recent years [28,29,30,31,32,33,34,35]. The winter phytoplankton may be an inoculum for spring phytoplankton development and cause an early depletion of nutrients, and may also affect the food web in aquatic ecosystems during spring and summer [36,37]. Thus, the role of winter periods in shaping the phytoplankton community in a lake for the whole of the subsequent year has recently been widely discussed [38,39,40,41]. Simultaneously, there have also been some experimental studies which pointed out that selected chlorophytes and cyanobacteria can have similar optimum growth conditions. However, chlorophyte growth rates at their optimum temperature might even be significantly higher than those of cyanobacteria [42]. Thus, chlorophytes together with cyanobacteria can develop and grow well during hot summers. Therefore, the effect of climate warming, coupled with short-term extreme weather events (e.g., heavy rains, droughts, high temperatures, and the occurrence of a mild or cold winter) can lead to an increase in phytoplankton biomass, especially in closed lake ecosystems.
In this study, we analysed the effects of climatic variability (the type of winter and changes in temperature and total precipitation) on the physical and chemical parameters and phytoplankton communities in eutrophic lakes in a temperate zone. We hypothesised that the physical and chemical parameters of the water and the phytoplankton community during the growing season were linked to the following: (1) the occurrence of cold or mild winters preceding the vegetative growth season; (2) the changes in precipitation intensity during the year; and (3) the changes in the air temperature during the growing season. We also wanted to check whether these changes have led to divergent or similar responses in recent years among the studied lakes, which differed in their phytoplankton community compositions. 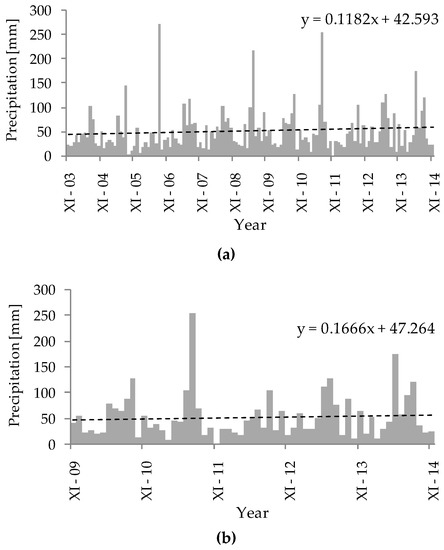 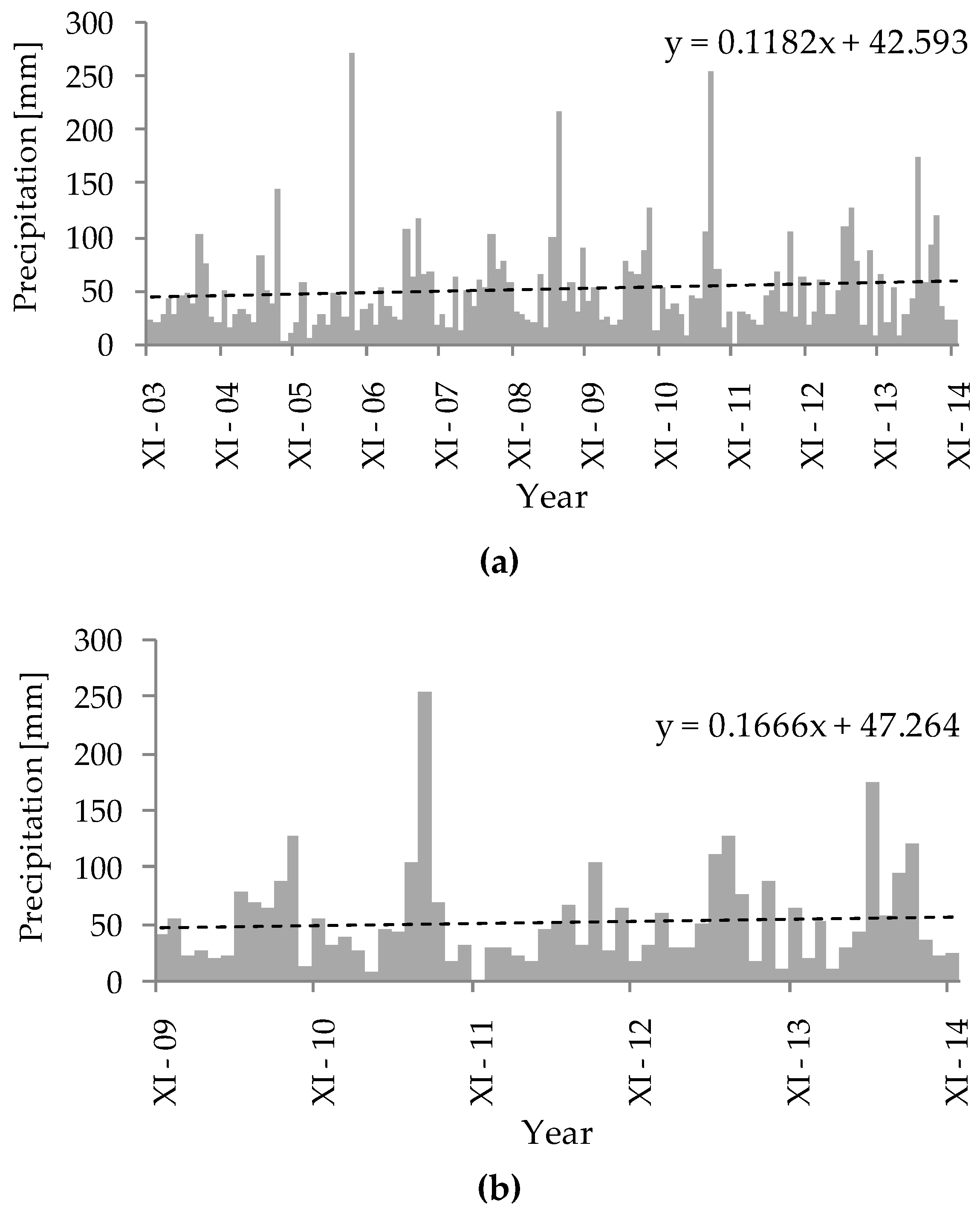 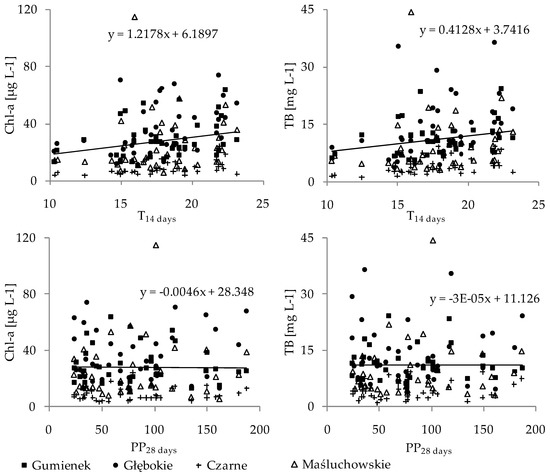 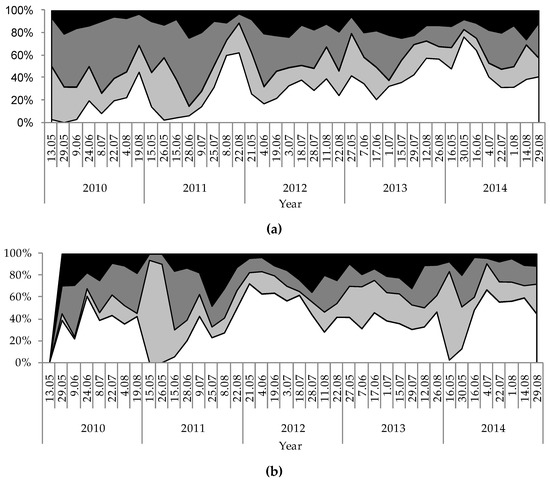 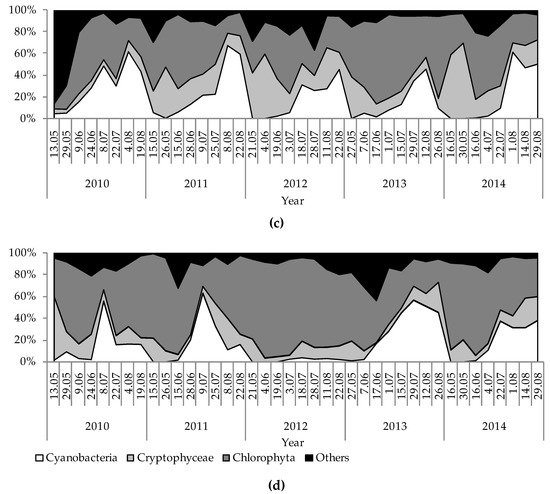 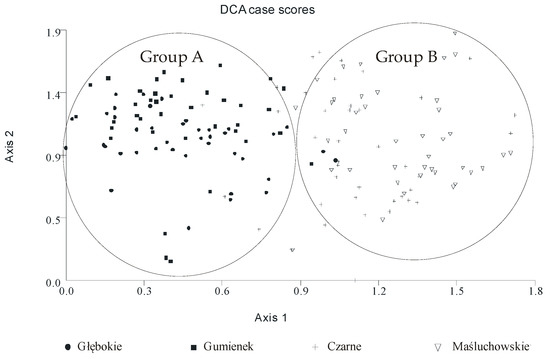 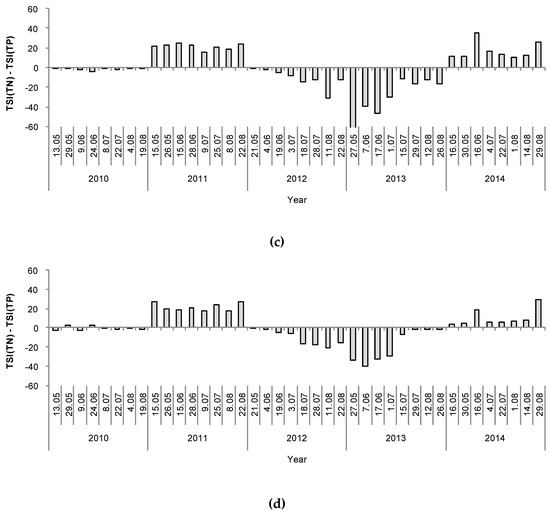 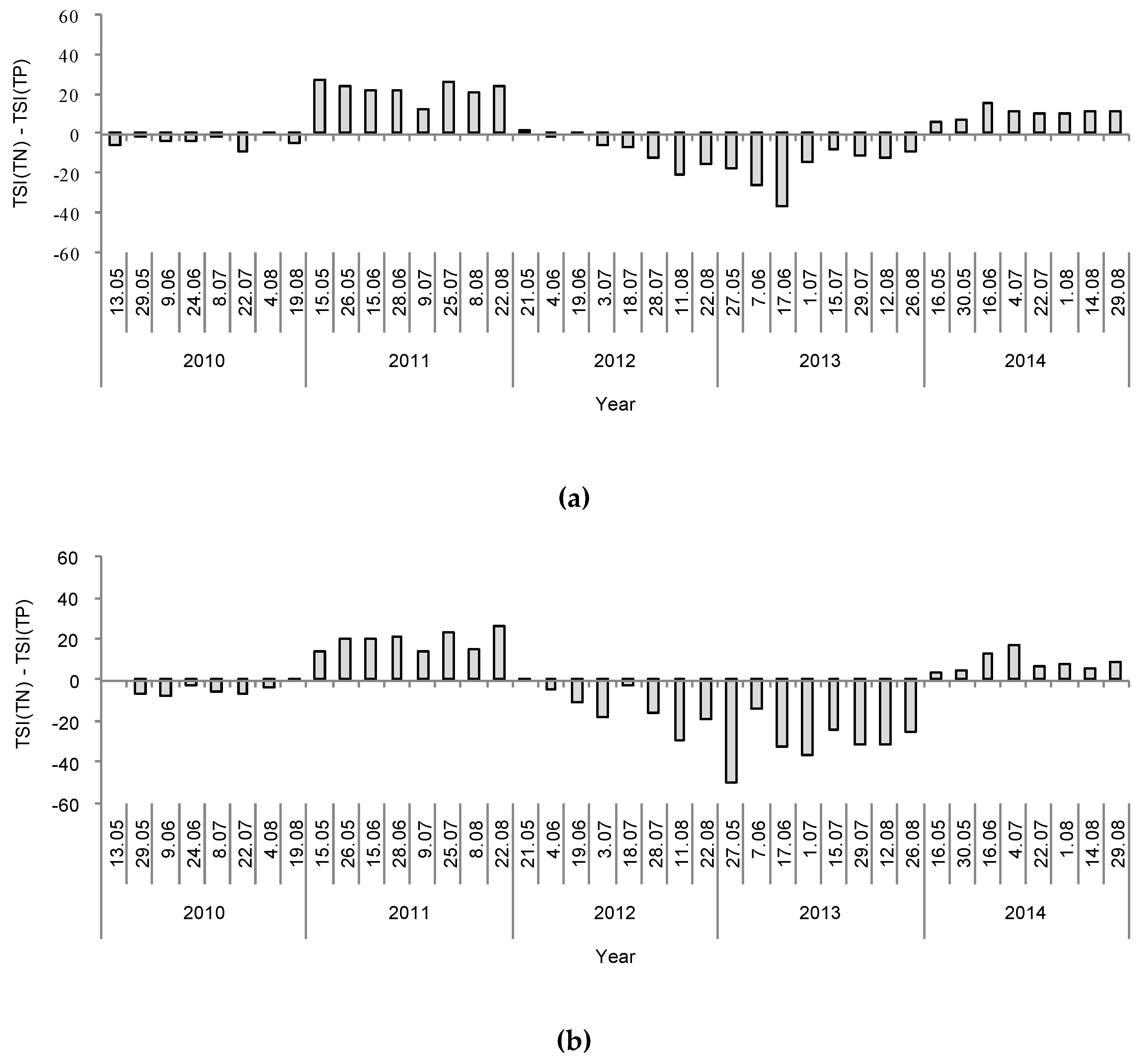 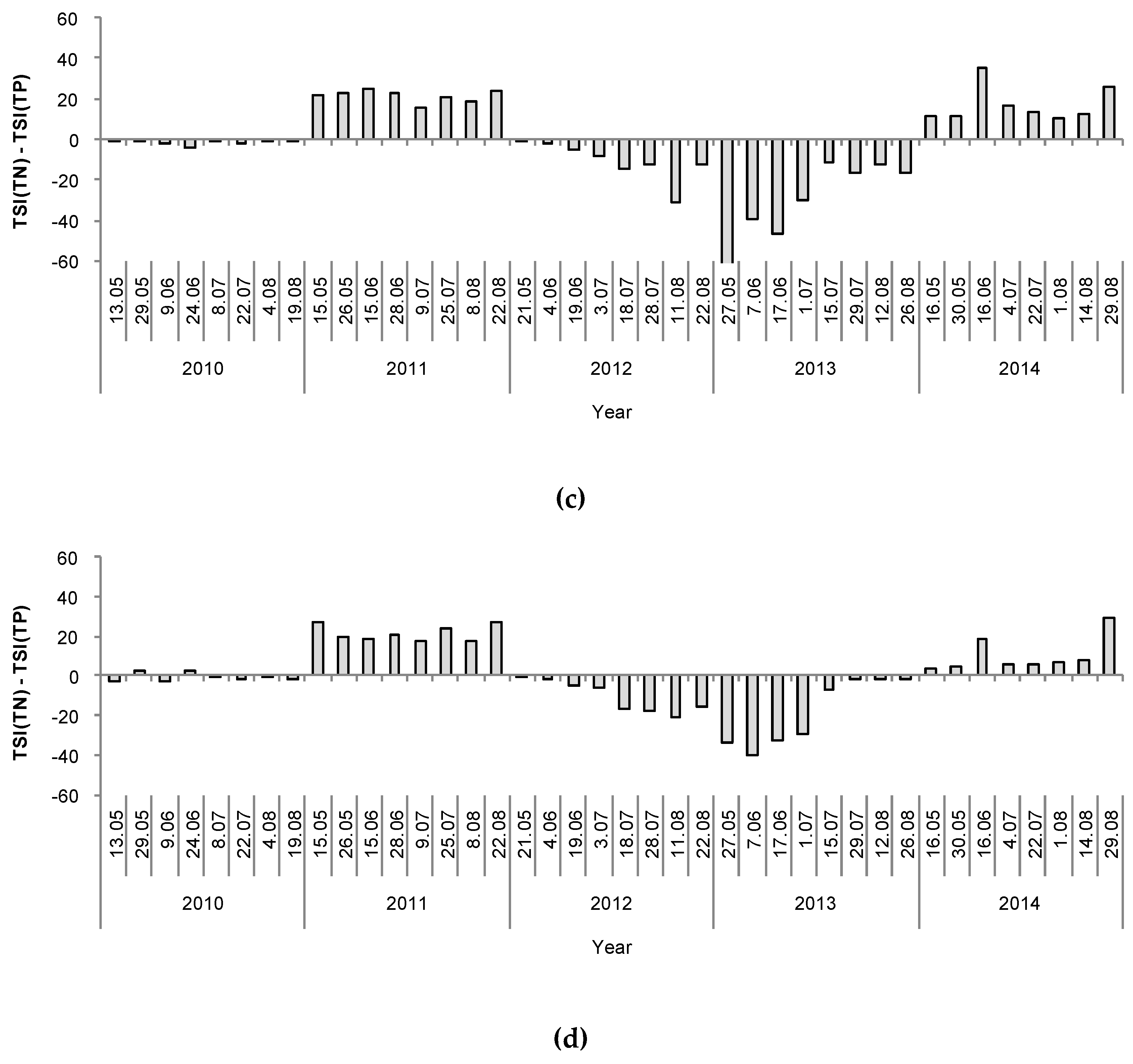