Introductions of nonnative species can have impacts on the ecology, biodiversity, human and non-human health, and economies of the novel geographic range, e.g., [1] and papers therein. Such impacts may manifest as either positive, negative, or mixed outcomes [1]. Due to its island-like geography, large population, major ports of entry, and diversity of sub-tropical habitats, the state of Florida, USA has become a hotbed of both intentional and accidental species introductions [2,3]. Aquatic habitats are not immune, with at least 42 exotic fish species having been reported as established in Florida freshwater systems [4].
Among these are the South American suckermouth armored catfishes of the genus Pterygoplichthys (Siluriformes: Loricariidae). Members of this genus have been introduced to at least five continents and 21 countries, likely via the aquarium trade [5]. Multiple Pterygoplichthys species and their presumed hybrids are established throughout peninsular Florida and can form dense clusters in lakes and rivers. These fishes have been implicated in numerous negative ecological and economic impacts in their novel ranges, including, for example, competing with native fishes, inducing altered behaviors in endangered manatees (Trichechus manatus), causing erosion and sedimentation via nest excavation, and generating biogeochemical hotspots (e.g., [6,7,8,9]).
In Florida, members of the genus Pterygoplichthys are largely considered “trash” fish and unmarketable bycatch. Recent anecdotal reports from numerous commercial freshwater fishing operations have suggested a shift in catch composition and revenue in response to the presence of Pterygoplichthys spp. (A. Orfinger personal communications; e.g., Figure 1).
In the present study, we aimed to explore the influence of Pterygoplichthys spp. and other nonnative fishes on catch composition and economic output using a long-term data set from a commercial haul seine fishery. Specifically, we anticipated that an increase in Pterygoplichthys spp. would correspond to a proportional decrease in marketable fish yield. Likewise, we also expected that another nonnative fish genus, tilapia, Oreochromis spp., would constitute the most profitable taxon. By investigating the interactions of Pterygoplichthys spp. and other nonnative fishes on freshwater net fisheries, we hope to provide insight into the relationships between native and nonnative fishes and the fishery operations that rely on these fish communities and make management recommendations, as appropriate.

The seine fishery evaluated in this study operates out of Winter Haven, Polk County, FL, USA. Winter Haven is home to an extensive chain of natural lakes at the headwaters of the Peace River–Charlotte Harbor watershed (Figure 2). The commercial operation in question fishes in 14 of the 25 lakes. Most of the lakes (18/25) are considered impaired in terms of water quality [10]. Lake Hancock is one of the largest and the primary target of fishing activity (27°58′6.52′′ N, 81°50′20.12′′ W). Lake Hancock spans 1851 ha and reaches a maximum depth of 4.9 m, with an average depth of 1.2 m [11].

The fishery-dependent data set was generated based on collection efforts between 1995 and 2018. Fishes were collected using a haul seine with dimensions 914.4 m length, 5.2 m depth, and 7.6 cm nylon mesh. Five variables were included in the analysis: (1) year, (2) lake representation (percent overall catch), (3) taxon, (4) estimated harvest (kg), and (5) market value of harvest (USD).
Data were not collected in 1996 and 2007, resulting in a total of 22 years of data collection. Lake representation is described as percent harvest from each of the 14 lakes in relation to the overall catch each year. Lake representation also likely shifted concerning fishing efforts to the most profitable lake to optimize the harvest each year. Average total fishing effort was 57 days/year. Taxa reported (n = 6) include tilapia (nonnative Oreochromis spp.), catfishes (native Ictalurus spp.), American shad (native Alosa sapidissima), gar (native Lepisosteus spp.), suckermouth armored catfishes (nonnative Pterygoplichthys spp.), and the brown hoplo (nonnative Hoplosternum littorale). Harvest was reported for species each year. A missing harvest value of brown hoplo in 2018 was treated as zero. Market value reported was the wholesale value at dock side. Tilapia and catfishes were heavily marketable. Shad and brown hoplo were partially marketable. Gar and suckermouth armored catfishes were not marketable.

3.2. Economic Impact of the Pterygoplichthys Invasion

Fishing revenue stemmed mostly from tilapia and native catfishes. Shad was somewhat marketable. Nonnative brown hoplo was introduced in 2005 and is also somewhat marketable (Figure 6). The profit index benchmark was $0.66 kg−1; the lowest profit index post-invasion was $0.19 kg−1 in 2005, while the highest was $0.93 kg−1 in 2012 and 2015 (Figure 7). During the 1999–2018 post-invasion, there were 13 years during which the profit index was lower than the benchmark.
The profit index is driven by both fish yield and market price. However, the profit index of fishery operation in Winter Haven is driven more by market value than by yield. This is demonstrated well by data in 2018, when the highest CPUE-post was 4345 kg day−1 and the ratio of the suckermouth armored catfishes was 0.08 (Figure 4), but the prices of tilapia and native catfishes were just half of their pre-invasion period values (Figure 6), making the profit index in 2018 67% lower than the benchmark (Figure 7). A similar trend was observed in 2004 and 2013 with higher CPUE and a low ratio of suckermouth armored catfishes (i.e., <0.15), but also a lower unit price per marketable fish (Figure 4, Figure 6 and Figure 7).

3.3. Profit Index versus Species Diversity and Ratio of Pterygoplichthys spp

A significant negative correlation existed between the inverse Simpson’s diversity index and profit index (r2 = 0.62, p = 1.497 × 10−5; Figure 8), and also between the ratio of suckermouth armored catfishes and profit index (r2 = 0.60, p = 1.665 × 10−8; Figure 9). As species diversity in the catch increased, there was a subsequent decrease in the profit index. Although some of this negative influence of increased species diversity is likely attributable to other unprofitable harvested species (e.g., gar), most is certainly a result of the inclusion of armored catfishes in the catch given its greater relative contribution (Figure 9). The highest profit index was associated with pre-invasion and years without suckermouth armored catfish bycatch.

Except for five years (i.e., 1999, 2000, 2001, 2005, and 2008), the majority of fish were harvested from Lake Hancock with the yield ranging from 16 to 117 kg/ha. Years with a high ratio of suckermouth armored catfishes in the catch often coincided with high representation of Lake Hancock in harvests (Figure 5; Figure 10). Increases in the “spreading out” of fishing effort across multiple lakes (i.e., 1999, 2001, 2005; Figure 10) did not increase total yield or reduce the ratio of the suckermouth armored catfishes in the harvest. Primary harvest of both marketable and undesirable fish was still from Lake Hancock. No evident pattern exists between lake diversity and species diversity at low levels of lake diversity. However, high levels of species diversity were associated with high levels of lake diversity (Figure 11).

Despite possible adverse ecological impacts, tilapia are of clear economic importance to Florida’s freshwater haul seine industry. Brown hoplo shows slight marketability, while the data here suggest that the suckermouth armored catfishes are economically harmful to an appreciable extent. Despite constituting a large proportion of each catch annually post-invasion, the suckermouth armored catfishes did not consistently dominate the overall yield. However, the profit index through time suggests that these exotic catfishes disrupt catch consistency and lower revenue relative to pre-invasion years. This conclusion is supported to by the inverse Simpson’s diversity values which demonstrate a decreasing profit index with increased species diversity (Figure 8). The increased diversity (a measure of relative abundance and richness) post-invasion can be directly attributed to the introduction of the suckermouth armored catfishes. These negative economic effects are consistent with the geographically and categorically broader findings of [4] that Pterygoplichthys spp. exert low to moderate negative impacts.

The results presented here provide implications for targeting lakes for fish harvest. Of note, broadening fishing efforts to include multiple lakes was ineffective in increasing revenue relative to fishing a primary lake (i.e., Lake Hancock). Based on the current data, then, it seems pertinent to target only the most productive lake. Further supporting this notion is the fact that high levels of lake diversity correspond to higher species diversity. When coupled with the finding that higher species diversity is negatively correlated with profit index, spreading out catch efforts among lakes could possibly contribute to a lower profit index. Therefore, targeting fewer, more productive lakes would likely result in higher revenue per unit effort.
Steps should be taken to mitigate the ongoing issues presented by the suckermouth armored catfishes. First and foremost, a concerted effort should be undertaken to market these catfishes. Eaten widely throughout the Neotropics, the suckermouth armored catfishes are readably edible and demonstrably easy to harvest. Indeed, efforts to market these fishes are already underway by some private firms. For example, in parts of Mexico, where Pterygoplichthys spp. are also introduced, fishermen have embraced the previous nuisance fish and now market and sell its meat locally and internationally (Acari Fish Co., Personal Communication). However, the campaign of marketing these fishes is still in its infancy, with no peer-reviewed literature to evaluate consumer acceptability beyond the fishes’ native South America. Fisheries economists should seek to work with companies and consumers to better understand marketing potential of Pterygoplichthys spp. In addition, Pterygoplichthys spp. has proven a valuable commercial fish meal replacement [13], a source of antioxidants for nutrition supplements [14], and even shows promise for use in biodiesel production [15].
Government subsidization, through a bounty program or incentivization for commercial fishers, is another option for mitigation. Such programs have been employed with varying degrees of success and for various taxa globally, including in Florida [16]. For example, commercial and recreational fisheries of invasive red lionfish (Pterois volitans) are underway in the United States and seem to inhibit local lionfish populations [17]. Given the dense groupings formed by Pterygoplichthys spp., it is reasonable to suggest that at least some degree of population inhibition could be imparted by harvest-based mitigation efforts. While unlikely to eliminate the Florida populations, harvesting suckermouth armored catfishes provides an economically-sound option that bears little environmental tradeoffs compared to other options (e.g., rotenone poisoning, [18]).

Nonnative species are a double-edged sword for Florida freshwater seine fisheries. While exotic tilapia are highly marketable, other species such as the suckermouth armored catfishes are not currently marketed and seem to be negatively impacting fishery revenue. A growing body of research also suggests other negative ecological and economic impacts imparted by the genus Pterygoplichthys [4]. Given that large-scale eradication of these hardy and widespread fishes is unfeasible once established [4], we recommend marketing the edible suckermouth armored catfishes for consumption. In doing so, fisheries that otherwise suffer can potentially turn a profit while simultaneously exerting some degree of pressure on the introduced populations. Continued research is needed to better characterize the mechanisms of ecological and fisheries impacts of the suckermouth armored catfishes. Ongoing efforts to do so are currently underway in Florida and Vietnam.

Publication of this article was funded in part by the University of Florida Open Access Publishing Fund.

The authors wish to thank Taren Wadley, owner and operator of Wadley Seine, for providing the data without which the project could not have happened, and for her insights into Florida’s seining industry. We also wish to thank two anonymous reviewers for their helpful feedback that helped to improve the manuscript. 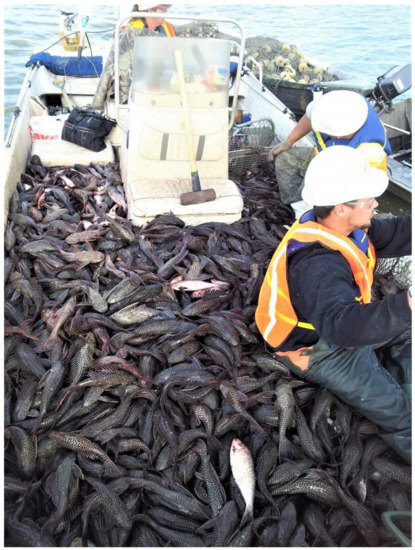 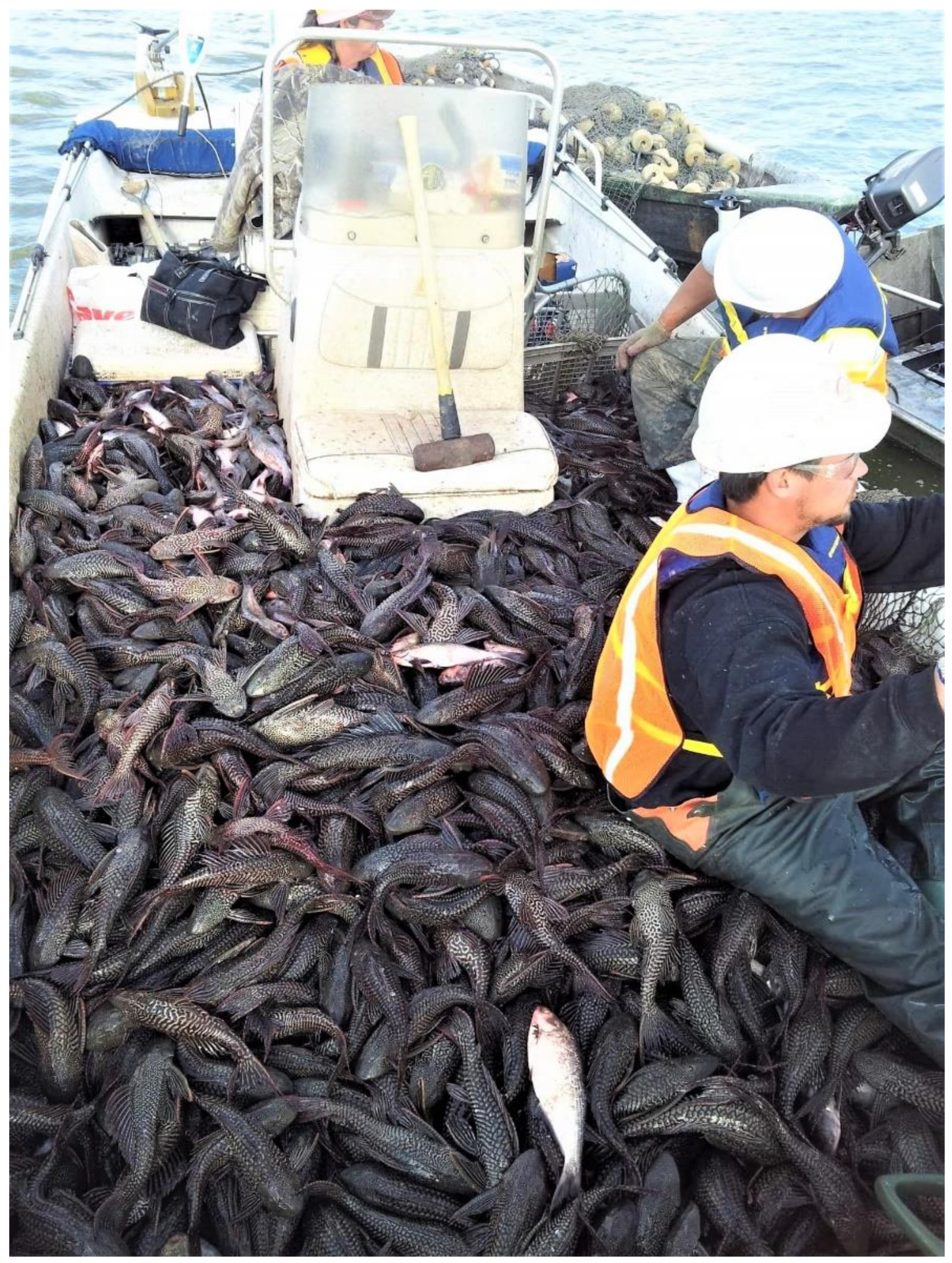 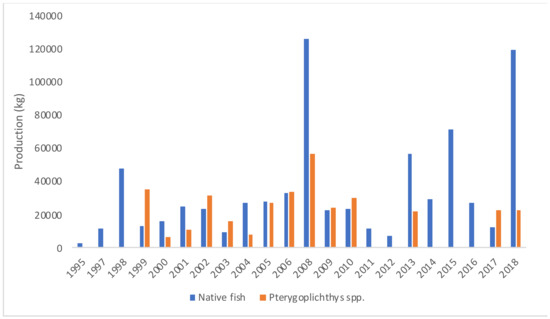 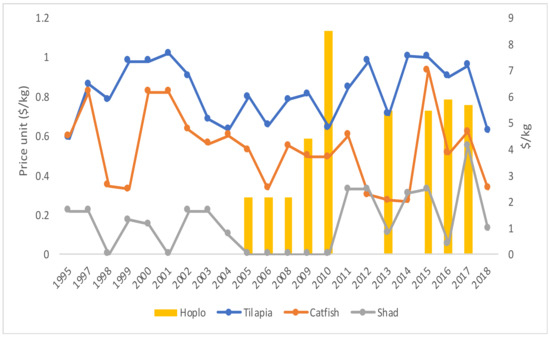 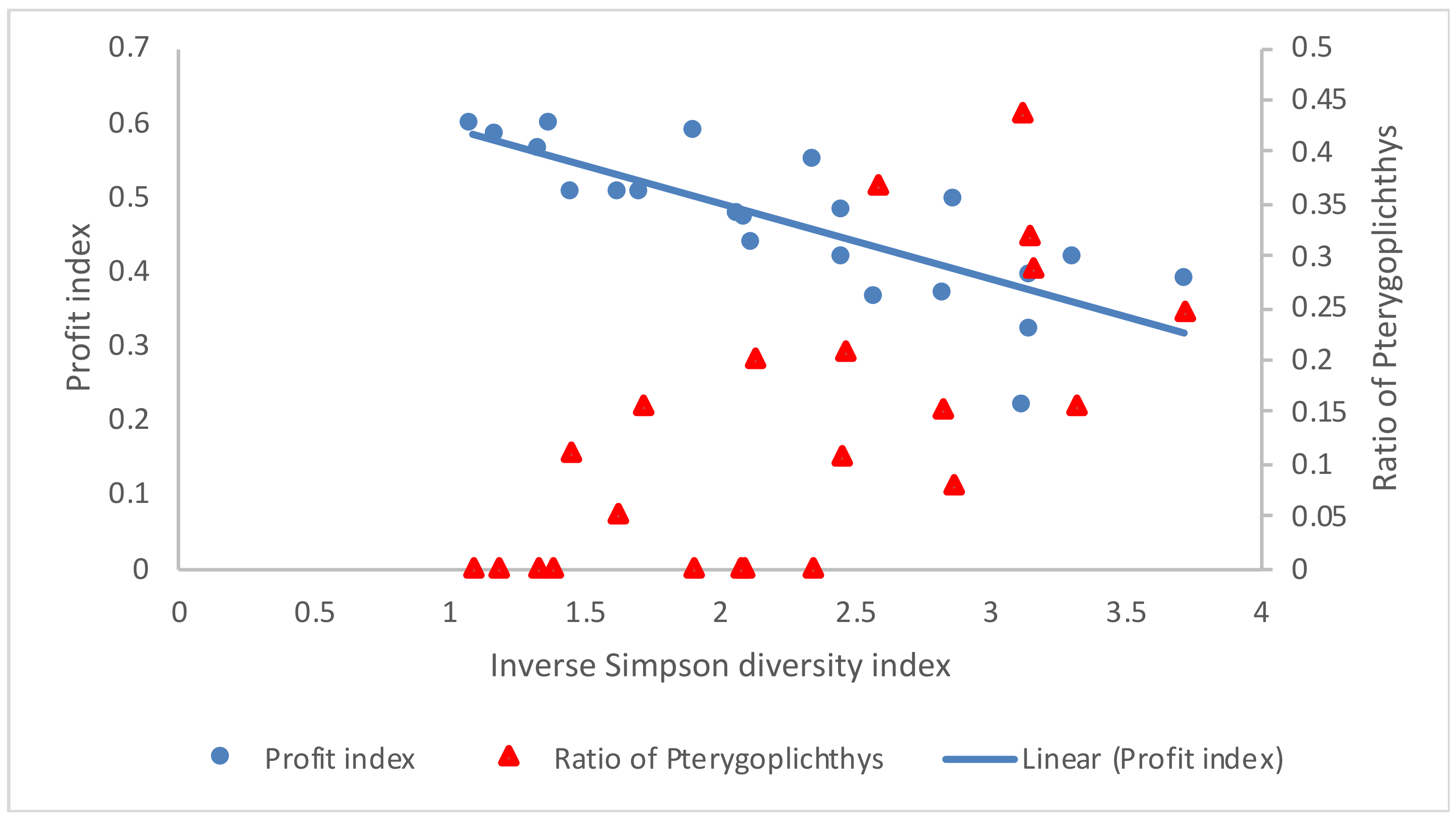 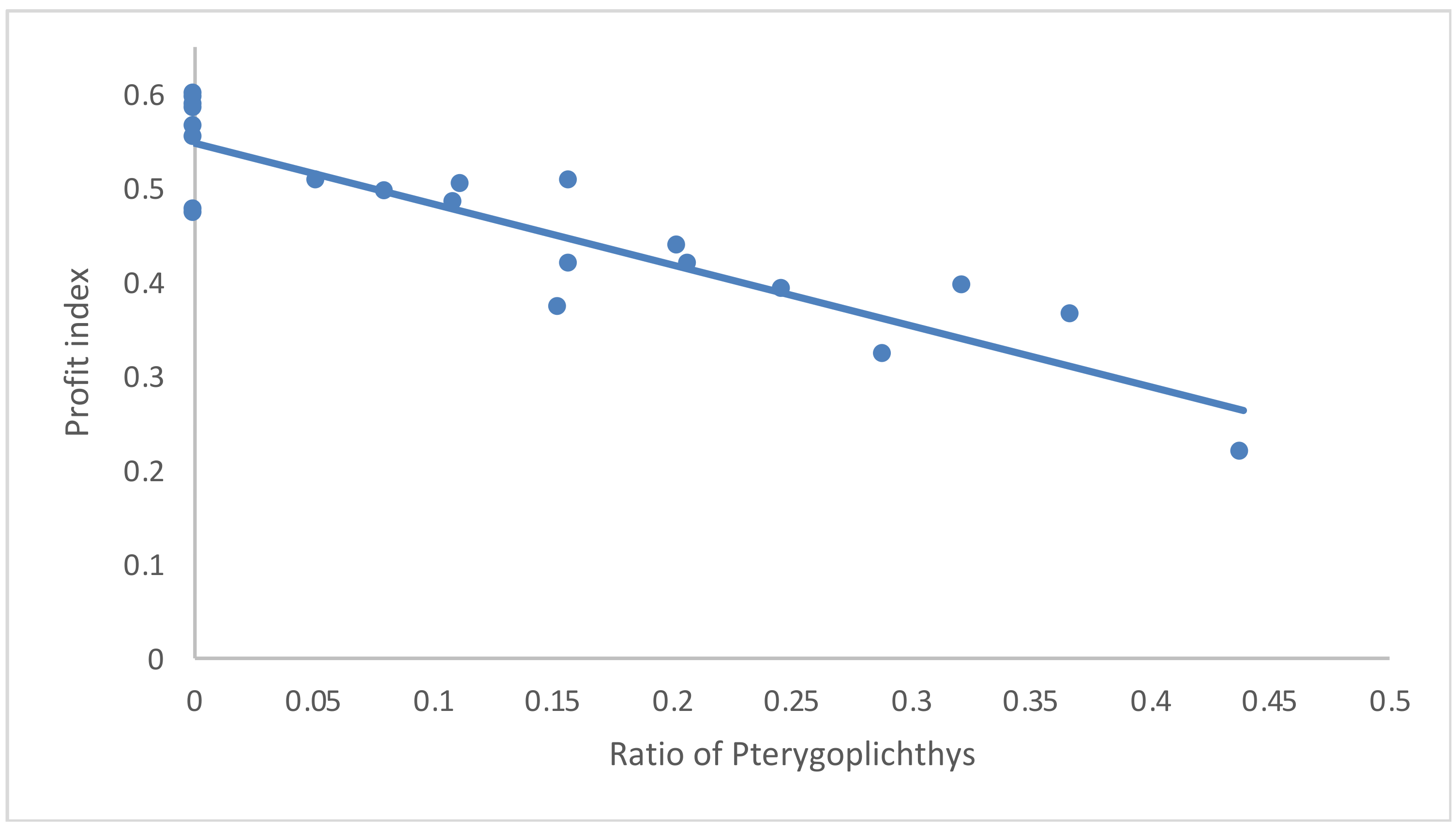 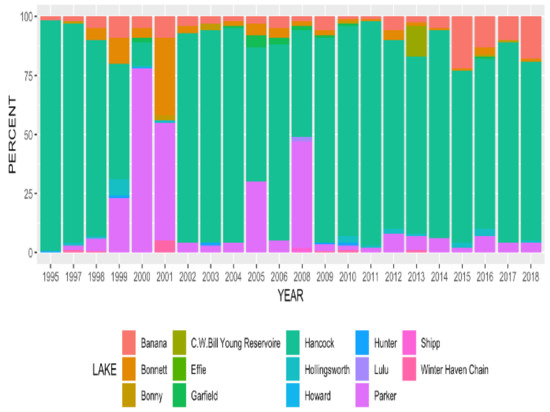 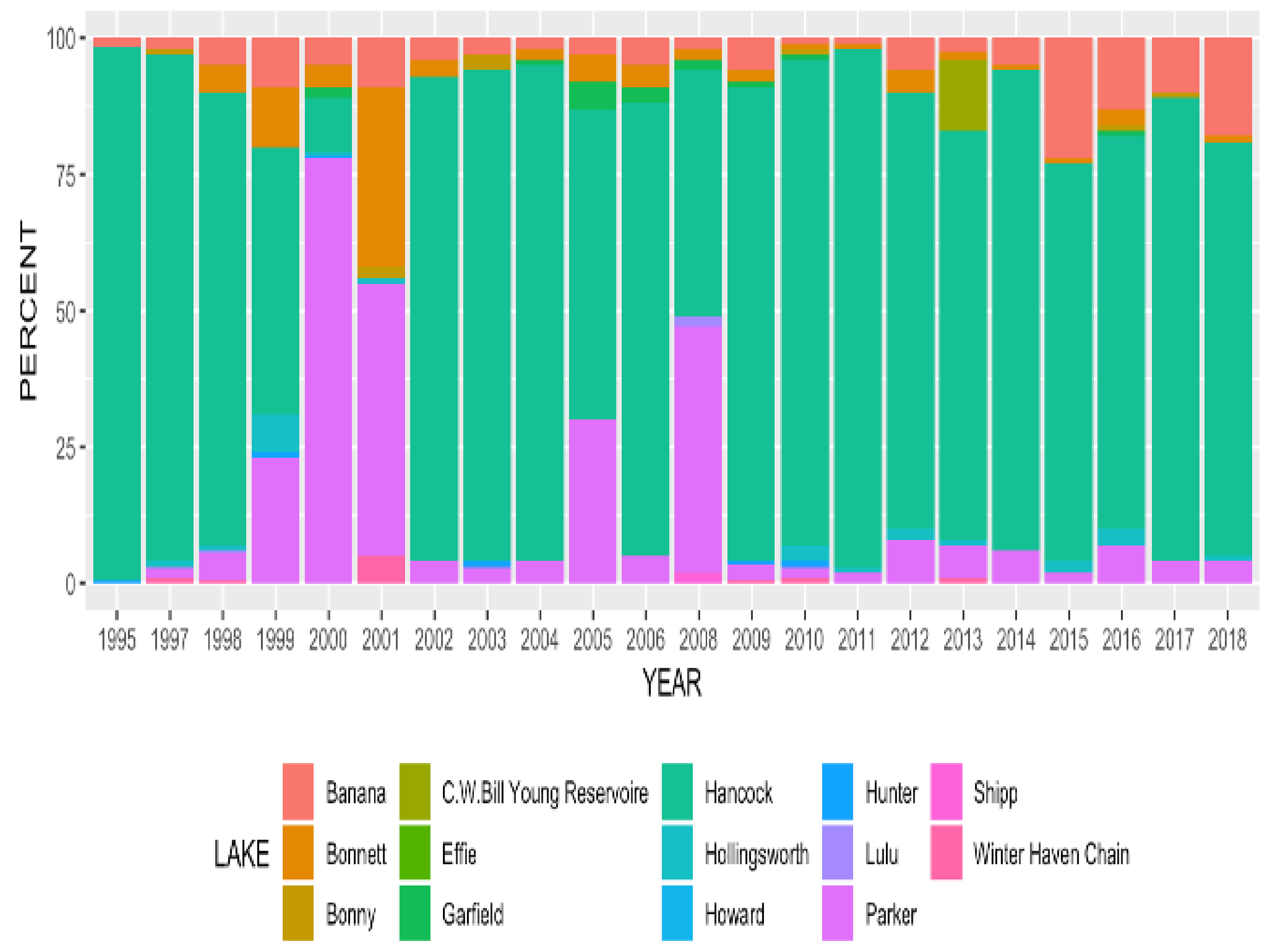