Using a Distributed Recharge Model to Quantify Recharge Processes in a Semi-Arid Karst Catchment: An Example from Wadi Natuf, West Bank
Next Article in Special Issue

How does PTF Interpret Soil Heterogeneity? A Stochastic Approach Applied to a Case Study on Maize in Northern Italy

Soil water balance on a local scale is generally achieved by applying the classical nonlinear Richards equation that requires hydraulic properties, namely, water retention and hydraulic conductivity functions, to be known. Its application in agricultural systems on field or larger scales involves three major problems being solved, related to (i) the assessment of spatial variability of soil hydraulic properties, (ii) accounting for this spatial variability in modelling large-scale soil water flow, and (iii) measuring the effects of such variability on real field variables (e.g., soil water storage, biomass, etc.). To deal with the first issue, soil hydraulic characterization is frequently performed by using the so-called pedotransfer functions (PTFs), whose effectiveness in providing the actual information on spatial variability has been questioned. With regard to the second problem, the variability of hydraulic properties at the field scale has often been dealt with using a relatively simple approach of considering soils in the field as an ensemble of parallel and statistically independent tubes, assuming only vertical flow. This approach in dealing with spatial variability has been popular in the framework of a Monte Carlo technique. As for the last issue, remote sensing seems to be the only viable solution to verify the pattern of variability, going by several modelling outputs which have considered the soil spatial variability. Based on these premises, the goals of this work concerning the issues discussed above are the following: (1) analyzing the sensitivity of a Richards-based model to the measured variability of θ(h) and k(θ) parameters; (2) establishing the predictive capability of PTF in terms of a simple comparison with measured data; and (3) establishing the effectiveness of use of PTF by employing as data quality control an independent and spatially distributed estimation of the Above Ground Biomass (AGB). The study area of approximately 2000 hectares mainly devoted to maize forage cultivation is located in the Po plain (Lodi), in northern Italy. Sample sites throughout the study area were identified for hydropedological analysis (texture, bulk density, organic matter content, and other chemical properties on all the samples, and water retention curve and saturated hydraulic conductivity on a sub-set). Several pedotransfer functions were tested; the PTF‒Vereckeen proved to be the best one to derive hydraulic properties of the entire soil database. The Monte Carlo approach was used to analyze model sensitivity to two measured input parameters: the slope of water retention curve (n) and the saturated hydraulic conductivity (k0). The analysis showed sensitivity of the simulated process to the parameter n being significantly higher than to k0, although the former was much less variable. The PTFs showed a smoothing effect of the output variability, even though they were previously validated on a set of measured data. Interesting positive and significant correlations were found between the n parameter, from measured water retention curves, and the NDVI (Normalized Difference Vegetation Index), when using multi-temporal (2004–2018) high resolution remotely sensed data on maize cultivation. No correlation was detected when the n parameter derived from PTF was used. These results from our case study mainly suggest that: (i) despite the good performance of PTFs calculated via error indexes, their use in the simulation of hydrological processes should be carefully evaluated for real field-scale applications; and (ii) the NDVI index may be used successfully as a proxy to evaluate PTF reliability in the field. View Full-Text
Keywords: hydraulic properties; simulation model; PTF; Monte Carlo; NDVI; maize; above ground biomass hydraulic properties; simulation model; PTF; Monte Carlo; NDVI; maize; above ground biomass
►▼ Show Figures 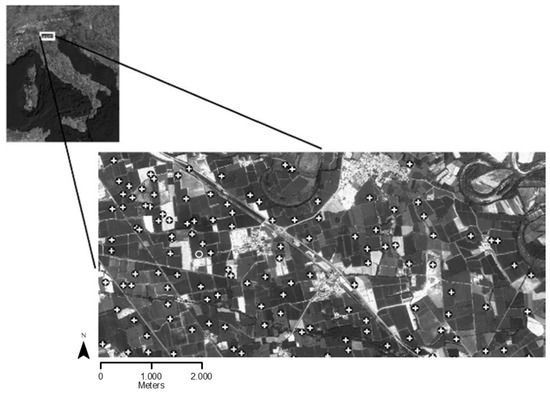