A two-dimensional hydrodynamic model for the waters off the coast of Jiangsu, where there are radial sand ridges (RSRs) (hereinafter, the RSR area), was established based on measured topographic, tide level and tidal current data. Considering the complex topographic and geomorphic characteristics of the RSR group in this area, an unstructured grid was used for the calculation. A four-layer refinement was applied to the grid from outside to inside to better fit the complex topography. The simulations were performed to examine the response of the hydrodynamic environment to the morphology of the RSRs in three scenarios, namely, when there are natural RSRs, no RSRs, and partially reclaimed RSRs. When there are no or partially reclaimed RSRs, the tidal current field still exists in a radial pattern in the RSR area. The radial tidal current field is relatively stable and is not controlled by the morphologies of the RSRs. The topographic changes do not alter the distribution pattern of the radial tidal current field but do affect the local current fields. When there are no RSRs, the flood currents can directly reach Jianggang. Under practical conditions, the RSRs block the tidal currents during a flood tide to some extent. This phenomenon is particularly pronounced when the RSRs are partially reclaimed. For example, during an ebb tide, when the tidal currents encounter sand ridges or reclamation areas, their streamlines bend, and they flow around the obstacles. This change will affect the material transport, sediment deposition and seabed erosion. View Full-Text
Keywords: RSRs; hydrodynamic model; numerical simulation; Jiangsu RSRs; hydrodynamic model; numerical simulation; Jiangsu
►▼ Show Figures 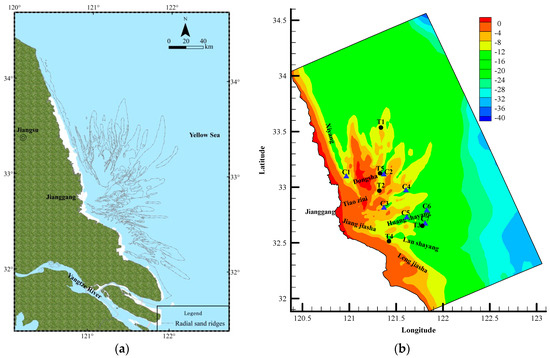