Winds in the Lower Cloud Level on the Nightside of Venus from VIRTIS-M (Venus Express) 1.74 μm Images

We present new results of our studies of zonal and meridional winds in both hemispheres of Venus, using ground- and space-based coordinated observations. The results obtained from telescope observations were retrieved with a Doppler velocimetry method. The wind velocities retrieved from space used an improved cloud-tracked technique based on the phase correlation between images. We present evidence that the altitude level sensed by our Doppler velocimetry method is approximately four kilometres higher (~4 km) than that using ground-tracked winds (using 380 or 365 nm). Since we often take advantage of coordinated space and ground observations simultaneously, this altitude difference will be very relevant in order to estimate the vertical wind shear at the related heights in future observation campaigns. We also explored a previous coordinated campaign using Akatsuki observations and its Ultraviolet Imager (UVI) at 283 and 365 nm filters, which showed that cloud-tracked winds showed a difference of about 10–15 ms−1, as in the case of the comparison between the Doppler velocimetry winds and the 365 nm cloudtracked winds. The results’ comparison also strongly suggested that the cloud-tracked winds based on the 283 nm filter’s images were sensing at about the same atmospheric altitude level as the Doppler winds. The observational results were compared with the ground-to-thermosphere 3D model developed at the Laboratoire de Meteorologie Dynamique (IPSL-Venus General Circulation Model (VGCM)) and AFES-Venus General Circulation Model (GCM), at several pressure levels (and related heights). The analysis and results showed the following: (1) additional confirmation of the coherence and complementarity in the results provided by these techniques on both the spatial and temporal time scales of the two methods; (2) we noticed in the following that the results from the two different Akatsuki/UVI filters (283 and 365 nm) showed an average difference of about 10–15 ± 5 ms−1, and we suggest this may be related to SO2 atmospheric fluctuations and the particular conditions in the coordinated observing time window; (3) we present evidence indicating that, in the context of our observations, visible Doppler methods (highly self-consistent) seem to sense wind speeds at a vertical level closer to or within the range sensed by the UVI 283 nm filter images (again, in the context of our observations); (4) modelling predicted wind profiles suggests that the layers of the atmosphere of Venus sensed by the methods referred to in Point 3 differ by approximately four km in altitude (~4 ± 2 km) regarding the cloud-tracked winds retrieved using 365 or 380 nm images. View Full-Text
Keywords: Venus; atmosphere; atmospheres; dynamics; spectroscopy; cloud tracking Venus; atmosphere; atmospheres; dynamics; spectroscopy; cloud tracking
►▼ Show Figures 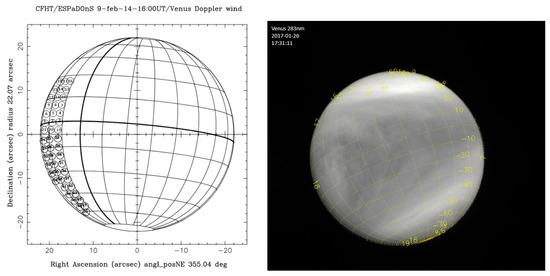