Characteristics of Air Pollution and Their Relationship with Meteorological Parameters: Northern Versus Southern Cities of China
Previous Article in Journal

The meridional temperature gradient between mid and high latitudes decreases by Arctic amplification. Following this decrease, the circulation in the mid latitudes may change and, therefore, the meridional flux of heat and moisture increases. This might increase the Arctic temperatures even further. A proxy for the vertically integrated atmospheric horizontal energy flux was analyzed using the self-organizing-map (SOM) method. Climate Model Intercomparison Project Phase 5 (CMIP5) model data of the historical and Representative Concentration Pathway 8.5 (RCP8.5) experiments were analyzed to extract horizontal flux patterns. These patterns were analyzed for changes between and within the respective experiments. It was found that the general horizontal flux patterns are reproduced by all models and in all experiments in comparison with reanalyses. By comparing the reanalysis time frame with the respective historical experiments, we found that the general occurrence frequencies of the patterns differ substantially. The results show that the general structure of the flux patterns is not changed when comparing the historical and RCP8.5 results. However, the amplitudes of the fluxes are decreasing. It is suggested that the amplitudes are smaller in the RCP8.5 results compared to the historical results, following a greater meandering of the jet stream, which yields smaller flux amplitudes of the cluster mean. View Full-Text
Keywords: self-organizing maps; CMIP5; horizontal heat flux self-organizing maps; CMIP5; horizontal heat flux
►▼ Show Figures 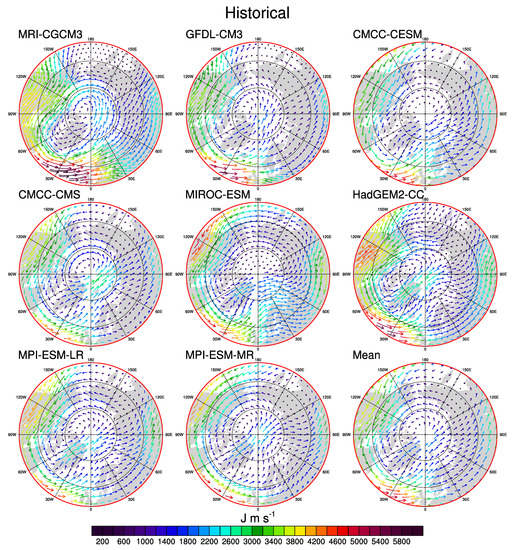