Evaluation of the Efficiency of Arundo donax L. Leaves as Biomonitors for Atmospheric Element Concentrations in an Urban and Industrial Area of Central Italy
Previous Article in Special Issue

Simulations of a Regional Climate Model (RCM) driven by identical lateral boundary conditions but initialized at different times exhibit the phenomenon of so-called internal model variability (or in short, Internal Variability—IV), which is defined as the inter-member spread between members in an ensemble of simulations. Our study investigates the effects of air-sea coupling on IV of the regional atmospheric model COSMO-CLM (CCLM) of the new regional coupled system model GCOAST-AHOI (Geesthacht Coupled cOAstal model SysTem: Atmosphere, Hydrology, Ocean and Sea Ice). We specifically address physical processes parameterized in CCLM, which may cause a large IV during an extreme event, and where this IV is affected by the air-sea coupling. Two six-member ensemble simulations were conducted with GCOAST-AHOI and the stand-alone CCLM (CCLM_ctr) for a period of 1 September–31 December 2013 over Europe. IV is expressed by spreads within the two sets of ensembles. Analyses focus on specific events during this period, especially on the storm Christian occurring from 27 to 29 October 2013 in northern Europe. Results show that simulations of CCLM_ctr vary largely amongst ensemble members during the storm. By analyzing two members of CCLM_ctr with opposite behaviors, we found that the large uncertainty in CCLM_ctr is caused by a combination of two factors (1) uncertainty in parameterization of cloud-radiation interaction in the atmospheric model. and (2) lack of an active two-way air-sea interaction. When CCLM is two-way coupled with the ocean model, the ensemble means of GCOAST-AHOI and CCLM_ctr are relatively similar, but the spread is reduced remarkably in GCOAST-AHOI, not only over the ocean where the coupling is done but also over land due to the land-sea interactions. View Full-Text
Keywords: climate modeling; internal variability; uncertainty; RCM; regional coupled system model; air-sea coupling; land-sea interaction; EURO-CORDEX; GCOAST; extremes climate modeling; internal variability; uncertainty; RCM; regional coupled system model; air-sea coupling; land-sea interaction; EURO-CORDEX; GCOAST; extremes
►▼ Show Figures 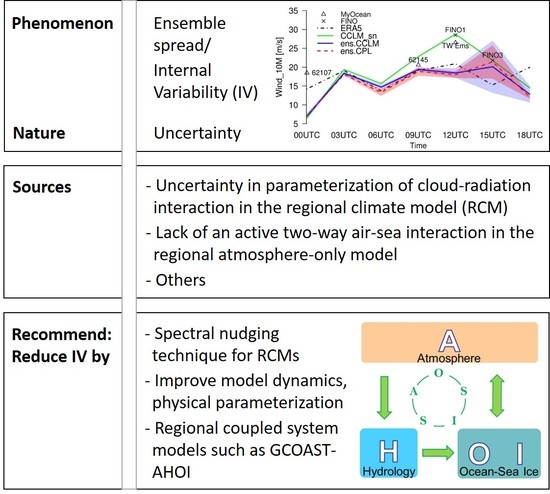