Evaluating the Adaptation of Chinese Torreya Plantations to Climate Change

Climate is considered to be the primary limiting factor for the range limits of species [1,2], such as the distribution of forests and trees. There are three possible outcomes for tree populations under climate change scenarios: migration to new habitats (habitats shrink or expand), adaptation to new conditions at their current locations, and local extinction.
Considerable attention has been paid to the prediction of the future distribution of trees and forests using bio-climate envelope models. The assumptions behind these models include that (i) climate and environmental conditions are the primary factors of a realized tree species niche, and (ii) climate and tree species or forest distribution are at an equilibrium [3], which means that there are strong associations between climate and species range. In this way, the future distribution of a species can be directly predicted from future climate scenarios using the environmental parameters associated with the current species distribution [4]. Spatial climate variations among test sites are used to substitute for temporal climate variations and to make predictions about the response of populations to future climates, often because appropriate data are unavailable for some process-based parameters [5,6,7].
However, consideration of the biological capacity of populations, or recognition of the extent and role of adaptation under local climate dynamics, is needed [8]. Successful adaptation cases should be characterized [9]. The role of intrinsic biological factors in regulating tree distribution remains poorly understood. This missing information results in inconsistency in our understanding of species responses to recent warming. Some species have moved northward as expected, while others have remained static or have shifted in the opposite direction to the expected [10,11]. Despite regional warming of 0.6 °C, the forests of northern Canada showed no expansion over the last 25 years from satellite imaging [12]. Progress should be made in the monitoring and evaluation of adaptation [9].
Thus, it is essential to study the extent of climate variation within species distribution regions to understand the adaptations of species to climate change. Studying adaptations to climate change is necessary so that people can adjust ecological, social, or economic systems in response to actual or expected climate change and its impact [13]. Quantifying the adaptability of plant species may provide strategies to mitigate the effects of climate change through species diversity [7,14]. Changes in the viability or distribution of some species may bring impacts on ecosystem functions and services [15,16].
The Chinese Torreya tree (Torreya grandis ‘Merrillii’) is an evergreen conifer that is found in the subtropical mountains of China, such as in Zhejiang, Anhui, and Fujian Provinces (Figure 1) [17,18]. The origin of Chinese Torreya plantations can be traced back to over a thousand years ago to the late Tang Dynasty in China. The trees can live for hundreds of years, sometimes even over a thousand years; some existing trees are as old as approximately 1500 years [17]. These trees were selected from quality trees of Torreya grandis Fortune ex Lindl. that were grafted on other trees in the Torreya genus [17,18]. Chinese Torreya is an important economic tree species that has been used for the production of nuts as food in China for thousands of years [18,19,20,21,22]. The tree also has a high medicinal value [17,18,23]. Due to the increasing requirement of nuts for recreational food, the price of the processed nuts has increased to $50–70 per kg. More than 50,000 farmers have been raised out of poverty by planting this valuable tree species to produce nuts in the Shaoxing region of China [18,20,24]. During the past ten years, in Zhuji County of Zhejiang Province alone (which is at the central production area), the total area of Chinese Torreya plantations increased from about 5333 ha in 2007 to 9000 ha in 2017 [20]. Currently, thousands of hectares of Chinese Torreya plantations have been planted in the surrounding counties and provinces. Regional farmers are developing large industrial plantations to increase nut production, especially in mountainous regions with weak economies. The governments in these regions have used Chinese Torreya plantations as an approach to help raise local people out of poverty.
Global climate change can affect local or regional vegetation in southeastern China [25]. Since Chinese Torreya trees are essential to the local economy, it is necessary to evaluate their adaptation to climate change, even though Chinese Torreya trees still grow well throughout their old habitat regions. However, the adaptability of tree species to climate change is challenging to test experimentally due to their long life cycles, high reproductive age, and the slow rate of speciation and extinction of trees [26]. Drought stress could affect the survival of seedlings and saplings of Chinese Torreya [17,27] because young roots cannot reach deep groundwater; however, this can often be combined with other factors (such as intensive solar radiation and extreme high and low temperatures) that cause tree deaths. So far, there have been limited reports on climate change and Chinese Torreya on a large scale. Thus, the goal of this study was to estimate how much climate variation Chinese Torreya had already experienced. The detailed objectives for this study included determining answers to the following questions: (1) Has there been a general trend in climate dynamics during the past several decades in regions with Chinese Torreya plantations? (2) How much variation in temperature and precipitation occurred in the regions with Chinese Torreya plantations in China? Was there a trend of increasing occurrences of drought? Finally, (3) how similar is the climate in those regions? The answers to these questions may help with the establishment of Chinese Torreya plantations in the new areas and with the management of established Chinese Torreya plantations.

Chinese Torreya plantations are sparsely distributed across the middle part of the subtropical region of China (Figure 1). For this study, six regions that have Chinse Torreya plantations in different provinces were selected [17]. The detailed information of these regions is listed in Table 1. These regions included Shexuan, Anhui Province (short name: Anhui); Qianshan, Jiangxi Province (Jiangxi); Wuyishan, Fujian Province (Fujian); Rongshan, Hunan Province (Hunan); Songtao, Guizhou Province (Guizhou); and Zhuji, Zhejiang Province (Zhuji). Since the seedlings in other regions were once introduced from Zhuji, then, Zhuji was considered to be the central production area. The climate niche of Chinese Torreya was initially supposed to be an annual air temperature that is above 15 °C and annual precipitation of 1000 mm [17], based on its geographic distribution.

Since there were limited ground observations of climate data in regions with Chinese Torreya plantations, the climate data for these six regions were obtained from the Climate Research Unit (University of East Anglia, UK). High-resolution gridded (0.5° × 0.5°) data for monthly air temperature and precipitation from 1901 to 2017 were used in this study. The data were drawn directly from the CRU TS 4.03 dataset, which included nearby observations [28].

Pearson correlation was used to determine any correlations in the monthly air temperature and precipitation from 1901 to 2017 between Zhuji and other production regions. The correlation coefficients were recorded. The statistical test was considered significant at p < 0.05.

It is useful to compare climate dynamics across the growing regions with Chinese Torreya plantations. This tree species has already experienced about 2.3 °C warming over the past century across its range in southeastern China. The climate thresholds for the tree identified by this study are much broader than the past findings, which were based only on the geographic distribution. Estimation of the climate niches of species needs to include climate dynamics across the distribution range. It is possible that Chinese Torreya has a very high level of adaptability to climate change.
The climate distance index could show the similarities between the climates of new regions and the central production region. The air temperatures of the different regions were very similar, but the precipitation varied. It seems likely that the distribution of Chinese Torreya trees is primarily determined by the air temperature.
This study may provide a new approach for uncovering the adaptations to climate change and potential regions for growing Chinese Torreya trees. Further research on the adaptive responses of Chinese Torreya trees (e.g., trait change) to climate change would be beneficial.

This study was partially supported by the USDA Mc-Stennis project (1008643) and Shaoxing 330. 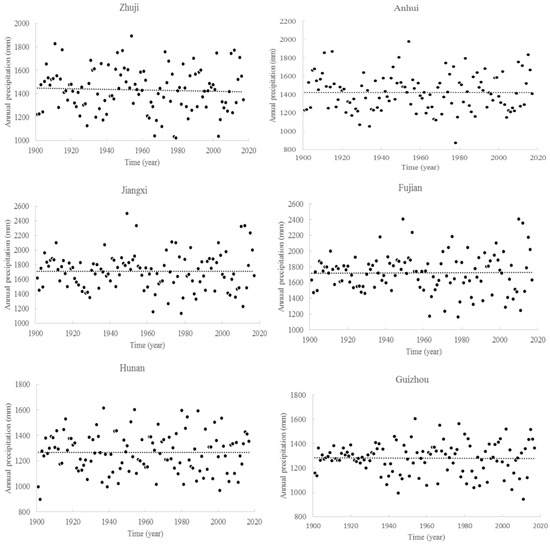 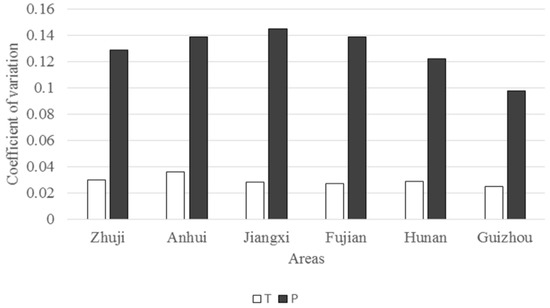 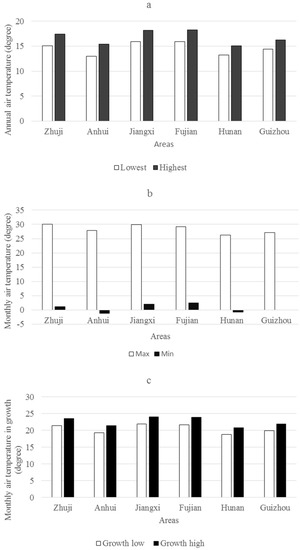 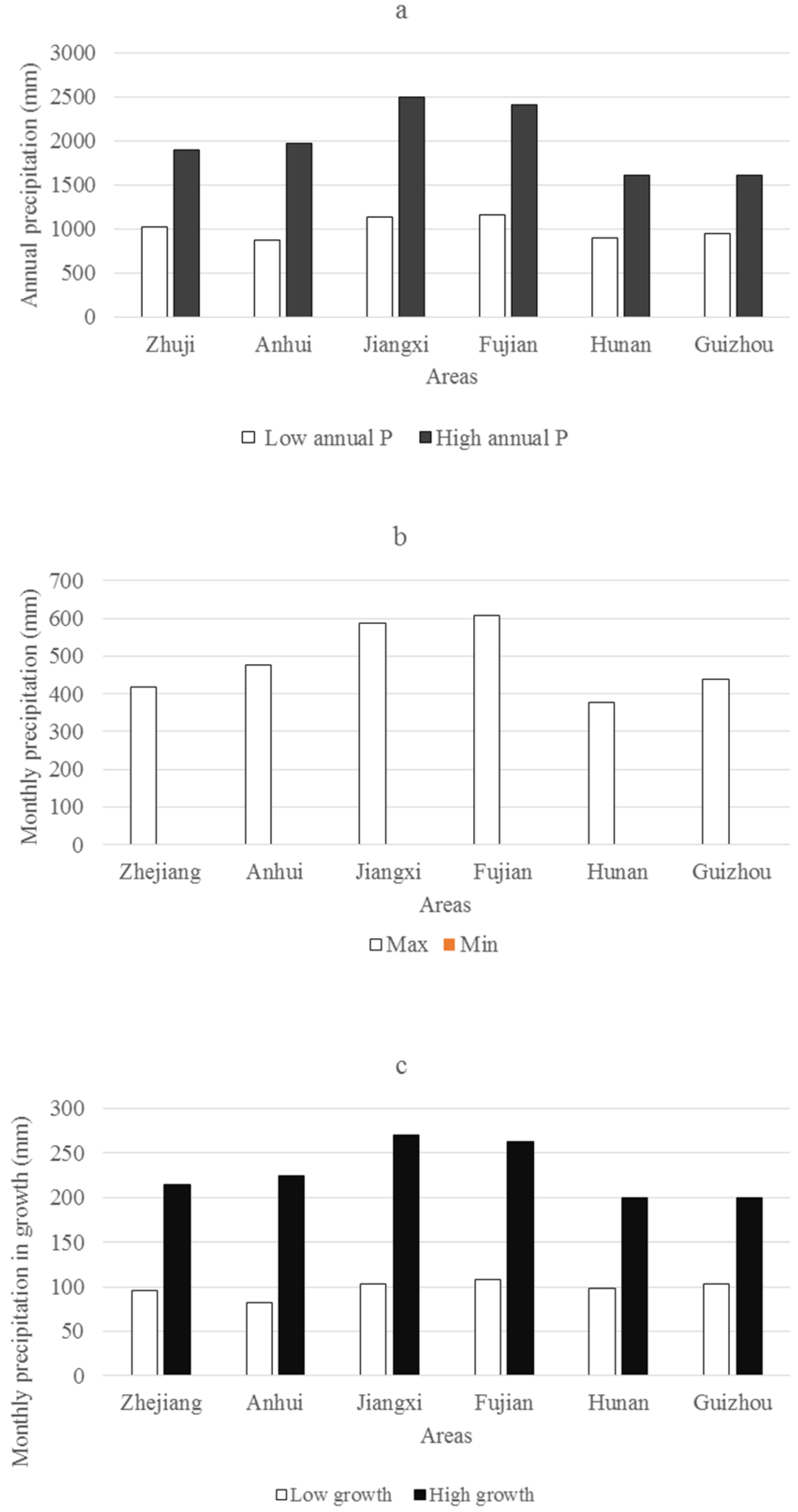 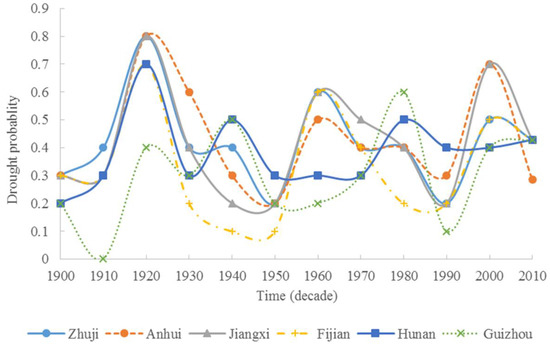