Statistical Modelling of Temperature-Attributable Deaths in Portuguese Metropolitan Areas under Climate Change: Who Is at Risk?

During intense heat episodes, the human population suffers from an increased morbidity and mortality. In order to minimize such negative health impacts, the general public and the public health authorities are informed and warned by means of an advanced procedure known as a “heat health warning system” (HHWS). It is aimed at triggering interventions and at taking preventive measures. The HHWS in Germany has been in operation since 2005. The present work is aimed at showing the updated structure of an advanced HHWS that has been developed further several times during its 15 years of operation. This is to impart knowledge to practitioners about the concept of the system. In Germany, dangerous heat episodes are predicted on the basis of the numerical weather forecast. The perceived temperature as an appropriate thermal index is calculated and used to assess the levels of heat stress. The thermo-physiologically based procedure contains variable thresholds taking into account the short time acclimatization of the people. The forecast system further comprises the nocturnal indoor conditions, the specific characteristics of the elderly population, and the elevation of a region. The heat warnings are automatically generated, but they are published with possible adjustments and a compulsory confirmation by the biometeorology forecaster. Preliminary studies indicate a reduction in the heat related outcomes. In addition, the extensive duration of the strongest heat wave in summer 2018, which lasted three weeks, highlights the necessity of the HHWS to protect human health and life. View Full-Text
Keywords: heat health warning system; perceived temperature; indoor model; human biometeorology; adaptation; urban heat island; elderly; Germany heat health warning system; perceived temperature; indoor model; human biometeorology; adaptation; urban heat island; elderly; Germany
►▼ Show Figures 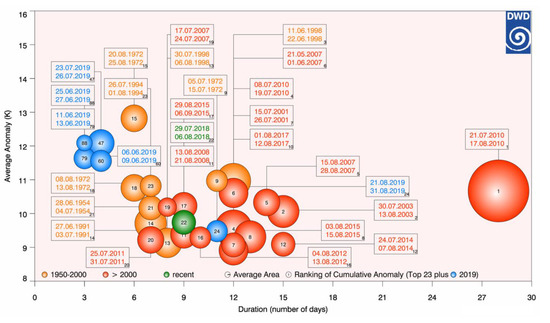