The ozone layer is well observed since the 1930s from the ground and, since the 1980s, by satellite-based instruments. The evolution of ozone in the past is important because of its dramatic influence on the biosphere and humans but has not been known for most of the time, except for some measurements of near-surface ozone since the end of the 19th century. This gap can be filled by either modeling or paleo reconstructions. Here, we address ozone layer evolution during the early 20th century. This period was very interesting due to a simultaneous increase in solar and anthropogenic activity, as well as an observed but not explained substantial global warming. For the study, we exploited the chemistry-climate model SOCOL-MPIOM driven by all known anthropogenic and natural forcing agents, as well as their combinations. We obtain a significant global scale increase in the total column ozone by up to 12 Dobson Units and an enhancement of about 20% of the near-surface ozone over the Northern Hemisphere. We conclude that the total column ozone changes during this period were mainly driven by enhanced solar ultra violet (UV) radiation, while near-surface ozone followed the evolution of anthropogenic ozone precursors. This finding can be used to constrain the solar forcing magnitude. View Full-Text
Keywords: ozone layer evolution; modeling; climate change; solar forcing; ozone precursors ozone layer evolution; modeling; climate change; solar forcing; ozone precursors
►▼ Show Figures 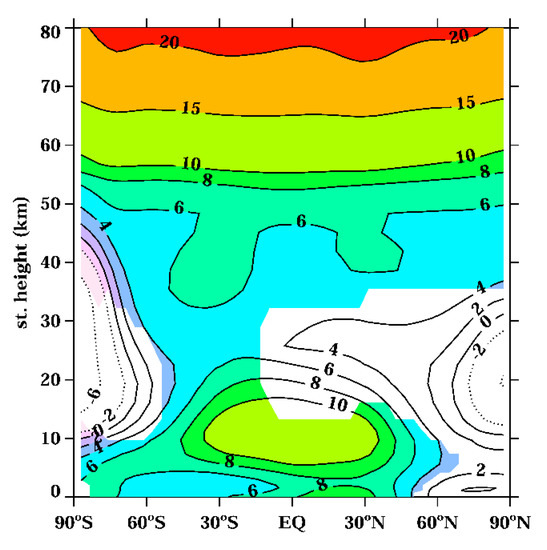