Identifying atmospheric transport pathways is important to understand the effects of pollutants on weather, climate, and human health. The atmospheric wind field is variable in space and time and contains complex patterns due to turbulent mixing. In such a highly unsteady flow field, it can be challenging to predict material transport over a finite-time interval. Particle trajectories are often used to study how pollutants evolve in the atmosphere. Nevertheless, individual trajectories are sensitive to their initial conditions. Lagrangian Coherent Structures (LCSs) have been shown to form the template of fluid parcel motion in a fluid flow. LCSs can be characterized by special material surfaces that organize the parcel motion into ordered patterns. These key material surfaces form the core of fluid deformation patterns, such as saddle points, tangles, filaments, barriers, and pathways. Traditionally, the study of LCSs has looked at coherent structures derived from integrating the wind velocity field. It has been assumed that particles in the atmosphere will generally evolve with the wind. Recent work has begun to look at the motion of chemical species, such as water vapor, within atmospheric flows. By calculating the flux associated with each species, a new effective flux-based velocity field can be obtained for each species. This work analyzes generalized species-weighted coherent structures associated with various chemical species to find their patterns and pathways in the atmosphere, providing a new tool and language for the assessment of pollutant transport and patterns. View Full-Text
Keywords: dynamical systems; atmospheric transport; Lagrangian coherent structures; air quality dynamical systems; atmospheric transport; Lagrangian coherent structures; air quality
►▼ Show Figures 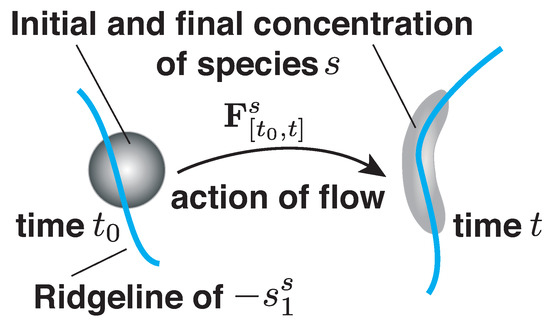