Appraisal of Climate Change and Its Impact on Water Resources of Pakistan: A Case Study of Mangla Watershed
Previous Article in Journal

Spring Season in Western Nepal Himalaya is not yet Warming: A 400-Year Temperature Reconstruction Based on Tree-Ring Widths of Himalayan Hemlock (Tsuga dumosa)

The Himalayan region has already witnessed profound climate changes detectable in the cryosphere and the hydrological cycle, already resulting in drastic socio-economic impacts. We developed a 619-yea-long tree-ring-width chronology from the central Nepal Himalaya, spanning the period 1399–2017 CE. However, due to low replication of the early part of the chronology, only the section after 1600 CE was used for climate reconstruction. Proxy climate relationships indicate that temperature conditions during spring (March–May) are the main forcing factor for tree growth of Tsuga dumosa at the study site. We developed a robust climate reconstruction model and reconstructed spring temperatures for the period 1600–2017 CE. Our reconstruction showed cooler conditions during 1658–1681 CE, 1705–1722 CE, 1753–1773 CE, 1796–1874 CE, 1900–1936 CE, and 1973 CE. Periods with comparably warmer conditions occurred in 1600–1625 CE, 1633–1657 CE, 1682–1704 CE, 1740–1752 CE, 1779–1795 CE, 1936–1945 CE, 1956–1972 CE, and at the beginning of the 21st century. Tropical volcanic eruptions showed only a sporadic impact on the reconstructed temperature. Also, no consistent temperature trend was evident since 1600 CE. Our temperature reconstruction showed positive teleconnections with March–May averaged gridded temperature data for far west Nepal and adjacent areas in Northwest India and on the Southwest Tibetan plateau. We found spectral periodicities of 2.75–4 and 40–65 years frequencies in our temperature reconstruction, indicating that past climate variability in central Nepal might have been influenced by large-scale climate modes, like the Atlantic Multi-decadal Oscillation, the North Atlantic Oscillation, and the El Niño-Southern Oscillation. View Full-Text
Keywords: Manang; past climate; dendroclimatology; climate variability; pre-monsoon temperature Manang; past climate; dendroclimatology; climate variability; pre-monsoon temperature
►▼ Show Figures 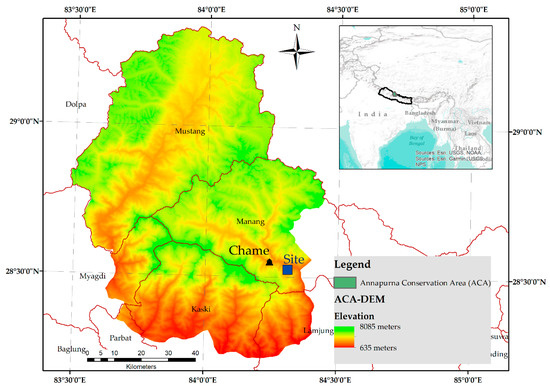