A Clean Air Plan for Sydney: An Overview of the Special Issue on Air Quality in New South Wales
Previous Article in Journal

A New Geochemical Method for Determining the Sources of Atmospheric Particles: A Case Study from Gannan, Northeast China
Previous Article in Special Issue

How Much Does Weather Matter? Effects of Rain and Wind on PM Accumulation by Four Species of Australian Native Trees

As interest in improving urban air quality grows, phytoremediation—amelioration through plants—is an increasingly popular method of targeting particulate matter (PM), one of the most harmful pollutants. Decades of research has proven that plants effectively capture PM from air; however, more information is needed on the dynamics of PM accumulation. Our study evaluated the effects of meteorological conditions on the dynamics of PM deposition, wash off and resuspension using four Australian tree species growing under natural conditions near a busy highway. Accumulation of PM on foliage was analyzed over the short term (daily changes) and over a longer time period (weekly changes). The results obtained were correlated with ambient concentrations of PM2.5 and PM10, rain intensity and wind strength. The highest accumulation of PM was recorded for Eucalyptus ovata (100.2 µg cm−2), which also had the thickest wax layer while the lowest was for Brachychiton acerifolius (77.9 µg cm−2). PM accumulation was highly changeable, with up to 35% different PM loads on the foliage from one day to the next. Importantly these dynamics are hidden in weekly measurements. Changes in PM deposition on the leaves was mostly affected by rain and to a lesser extent by wind, but the extent of the effect was species specific. The large PM fraction (10–100 µm) was the first to be removed from leaves, while the smallest PM fraction (0.2–2.5 µm) was retained for longer. Precipitation affects also PM retained in waxes, which until now were believed to be not affected by rain. This work demonstrates important interactions between PM load and weather, as well as adding to the small inventory of Australian native tree PM accumulation data. View Full-Text
Keywords: air quality; urban; sustainability; vegetation; PM; phytoremediation air quality; urban; sustainability; vegetation; PM; phytoremediation
►▼ Show Figures 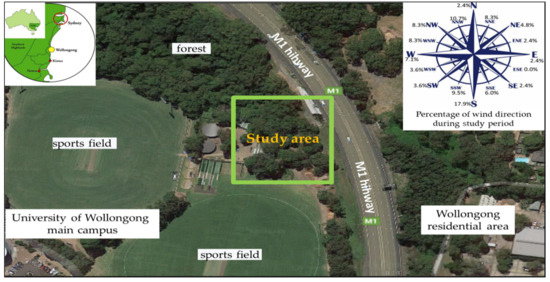