Southwest Slovenia is a region well-known for frequent episodes of strong and gusty Bora wind, which may damage structures, affect traffic, and poses threats to human safety in general. With the increased availability of computational power, the interest in high resolution modeling of Bora on local scales is growing. To model it adequately, the flow characteristics of Bora should be experimentally investigated and parameterized. This study presents the analysis of wind speed vertical profiles at Razdrto, Slovenia, a location strongly exposed to Bora during six Bora episodes of different duration, appearing between April 2010 and May 2011. The empirical power law and the logarithmic law for Bora wind, commonly used for the description of neutrally stratified atmosphere, were evaluated for 10-min averaged wind speed data measured at four different heights. Power law and logarithmic law wind speed profiles, which are commonly used in high resolution computational models, were found to approximate well the measured data. The obtained power law coefficient and logarithmic law parameters, which are for modeling purposes commonly taken to be constant for a specific site, were found to vary significantly between different Bora episodes, most notably due to different wind direction over complex terrain. To increase modeling precision, the effects of local topography on wind profile parameters needs to be experimentally assessed and implemented. View Full-Text
Keywords: Bora wind; logarithmic law; power law; roughness length; wind profile Bora wind; logarithmic law; power law; roughness length; wind profile
►▼ Show Figures 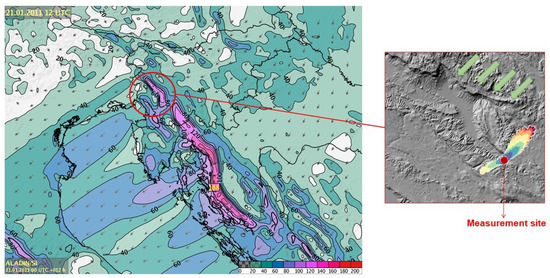