Olfactory Communication via Microbiota: What Is Known in Birds?
Next Article in Special Issue

Functional and folding constraints impose interdependence between interacting sites along the protein chain that are envisaged through protein sequence evolution. Studying the influence of structure in phylogenetic models requires detailed and reliable structural models. Polysaccharide deacetylases (PDAs), members of the carbohydrate esterase family 4, perform mainly metal-dependent deacetylation of O- or N-acetylated polysaccharides such as peptidoglycan, chitin and acetylxylan through a conserved catalytic core termed the NodB homology domain. Genomes of Bacillus anthracis and its relative Bacillus cereus contain multiple genes of putative or known PDAs. A comparison of the functional domains of the recently determined PDAs from B. anthracis and B. cereus and multiple amino acid and nucleotide sequence alignments and phylogenetic analysis performed on these closely related species showed that there were distinct differences in binding site formation, despite the high conservation on the protein sequence, the folding level and the active site assembly. This may indicate that, subject to biochemical verification, the binding site-forming sequence fragments are under functionally driven evolutionary pressure to accommodate and recognize distinct polysaccharide residues according to cell location, use, or environment. Finally, we discuss the suggestion of the paralogous nature of at least two genes of B. anthracis, ba0330 and ba0331, via specific differences in gene sequence, protein structure, selection pressure and available localization patterns. This study may contribute to understanding the mechanisms under which sequences evolve in their structures and how evolutionary processes enable structural variations. View Full-Text
Keywords: Bacillus anthracis; Bacillus cereus; polysaccharide deacetylase; functional divergence; structural evolution Bacillus anthracis; Bacillus cereus; polysaccharide deacetylase; functional divergence; structural evolution
►▼ Show Figures 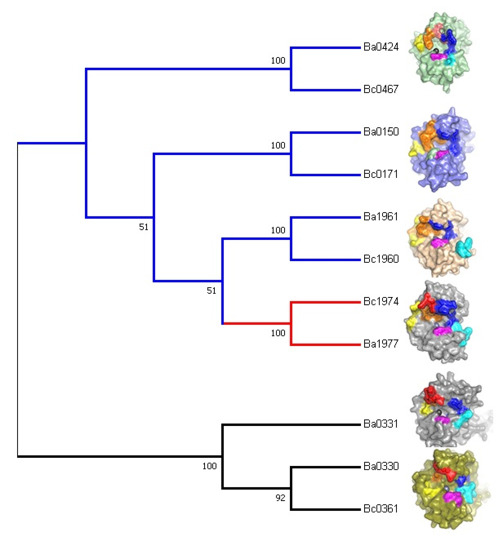