Atherosclerosis and cardiovascular disease development is the outcome of intermediate processes where endothelial dysfunction and vascular inflammation are main protagonists. Cell-derived microvesicles (MVs), endothelial progenitor cells (EPCs), and circulating microRNAs (miRNAs) are known as biomarkers and potential regulators for atherosclerotic vascular disease, but their role in the complexity of the inflammatory process and in the mechanism of vascular restoration is far from clear. We aimed to evaluate the biological activity and functional role of MVs, in particular of the EPCs-derived MVs (MVEs), of healthy origins in reducing atherosclerotic vascular disease development. The experiments were performed on hamsters divided into the following groups: simultaneously hypertensive–hyperlipidemic (HH group) by combining two feeding conditions for 4 months; HH with retro-orbital sinus injection containing 1 × 105 MVs or MVEs from control hamsters, one dose per month for 4 months of HH diet, to prevent atherosclerosis (HH-MVs or HH-MVEs group); and controls (C group), age-matched normal healthy animals. We found that circulating MV and MVE transplantation of healthy origins significantly reduces atherosclerosis development via (1) the mitigation of dyslipidemia, hypertension, and circulating EPC/cytokine/chemokine levels and (2) the structural and functional remodeling of arterial and left ventricular walls. We also demonstrated that (1) circulating MVs contain miRNAs; this was demonstrated by validating MVs and MVEs as transporters of Ago2-miRNA, Stau1-miRNA, and Stau2-miRNA complexes and (2) MV and MVE administration significantly protect against atherosclerotic cardiovascular disease via transfer of miR-223, miR-21, miR-126, and miR-146a to circulating late EPCs. It should be mentioned that the favorable effects of MVEs were greater than those of MVs. Our findings suggest that allogenic MV and MVE administration of healthy origins could counteract HH diet-induced detrimental effects by biologically active miR-10a, miR-21, miR-126, and miR-146a transfer to circulating EPCs, mediating their vascular repair function in atherosclerosis processes.
Keywords: cell-derived microvesicles (MVs); endothelial progenitor cells (EPCs); microRNAs; atherosclerosis; therapy cell-derived microvesicles (MVs); endothelial progenitor cells (EPCs); microRNAs; atherosclerosis; therapy
►▼ Show Figures 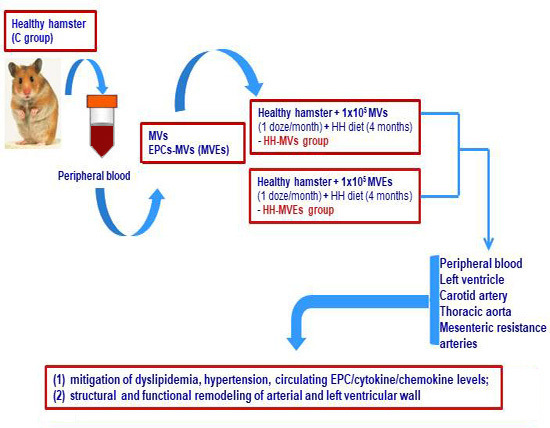