Cytokinesis in Eukaryotic Cells: The Furrow Complexity at a Glance
Previous Article in Special Issue

Fibronectin and Periostin as Prognostic Markers in Ovarian Cancer

Heat shock protein 90 (HSP90) is an evolutionarily conserved chaperone protein that controls the function and stability of a wide range of cellular client proteins. Fibronectin (FN) is an extracellular client protein of HSP90, and exogenous HSP90 or inhibitors of HSP90 alter the morphology of the extracellular matrix. Here, we further characterized the HSP90 and FN interaction. FN bound to the M domain of HSP90 and interacted with both the open and closed HSP90 conformations; and the interaction was reduced in the presence of sodium molybdate. HSP90 interacted with the N-terminal regions of FN, which are known to be important for matrix assembly. The highest affinity interaction was with the 30-kDa (heparin-binding) FN fragment, which also showed the greatest colocalization in cells and accommodated both HSP90 and heparin in the complex. The strength of interaction with HSP90 was influenced by the inherent stability of the FN fragments, together with the type of motif, where HSP90 preferentially bound the type-I FN repeat over the type-II repeat. Exogenous extracellular HSP90 led to increased incorporation of both full-length and 70-kDa fragments of FN into fibrils. Together, our data suggested that HSP90 may regulate FN matrix assembly through its interaction with N-terminal FN fragments. View Full-Text
Keywords: HSP90; fibronectin; extracellular matrix; client protein; fibrillogenesis HSP90; fibronectin; extracellular matrix; client protein; fibrillogenesis
►▼ Show Figures 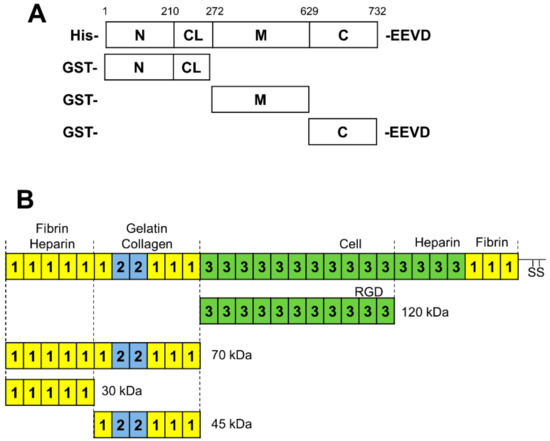