A Singular and Widespread Group of Mobile Genetic Elements: RNA Circles with Autocatalytic Ribozymes
Next Article in Special Issue

Ferritin, the principal intracellular iron-storage protein localized in the cytoplasm, nucleus, and mitochondria, plays a major role in iron metabolism. The encoding ferritin genes are members of a multigene family that includes some pseudogenes. Even though pseudogenes have been initially considered as relics of ancient genes or junk DNA devoid of function, their role in controlling gene expression in normal and transformed cells has recently been re-evaluated. Numerous studies have revealed that some pseudogenes compete with their parental gene for binding to the microRNAs (miRNAs), while others generate small interference RNAs (siRNAs) to decrease functional gene expression, and still others encode functional mutated proteins. Consequently, pseudogenes can be considered as actual master regulators of numerous biological processes. Here, we provide a detailed classification and description of the structural features of the ferritin pseudogenes known to date and review the recent evidence on their mutual interrelation within the complex regulatory network of the ferritin gene family. View Full-Text
Keywords: ferritin heavy chain (FTH1); pseudogenes; iron metabolism; miRNA; competing endogenous RNA (ceRNA) ferritin heavy chain (FTH1); pseudogenes; iron metabolism; miRNA; competing endogenous RNA (ceRNA)
►▼ Show Figures 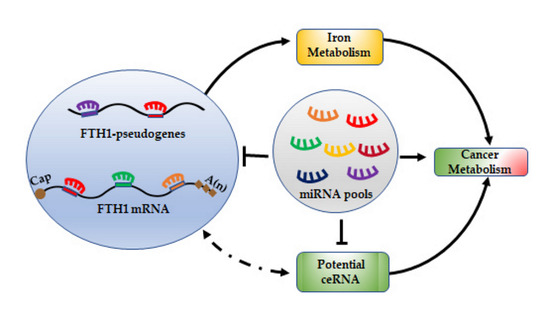