Profile of Matrix-Remodeling Proteinases in Osteoarthritis: Impact of Fibronectin

Fibronectin and Periostin as Prognostic Markers in Ovarian Cancer

Previously, based on a DNA microarray experiment, we identified a 96-gene prognostic signature associated with the shorter survival of ovarian cancer patients. We hypothesized that some differentially expressed protein-coding genes from this signature could potentially serve as prognostic markers. The present study was aimed to validate two proteins, namely fibronectin (FN1) and periostin (POSTN), in the independent set of ovarian cancer samples. Both proteins are mainly known as extracellular matrix proteins with many important functions in physiology. However, there are also indications that they are implicated in cancer, including ovarian cancer. The expression of these proteins was immunohistochemically analyzed in 108 surgical samples of advanced ovarian cancer (majority: high-grade serous) and additionally on tissue arrays representing different stages of the progression of ovarian and fallopian tube epithelial tumors, from normal epithelia, through benign tumors, to adenocarcinomas of different stages. The correlation with clinical, pathological, and molecular features was evaluated. Kaplan–Meier survival analysis and Cox-proportional hazards models were used to estimate the correlation of the expression levels these proteins with survival. We observed that the higher expression of fibronectin in the tumor stroma was highly associated with shorter overall survival (OS) (Kaplan–Meier analysis, log-rank test p = 0.003). Periostin was also associated with shorter OS (p = 0.04). When we analyzed the combined score, calculated by adding together individual scores for stromal fibronectin and periostin expression, Cox regression demonstrated that this joint FN1&POSTN score was an independent prognostic factor for OS (HR = 2.16; 95% CI: 1.02–4.60; p = 0.044). The expression of fibronectin and periostin was also associated with the source of ovarian tumor sample: metastases showed higher expression of these proteins than primary tumor samples (χ2 test, p = 0.024 and p = 0.032). Elevated expression of fibronectin and periostin was also more common in fallopian cancers than in ovarian cancers. Our results support some previous observations that fibronectin and periostin have a prognostic significance in ovarian cancer. In addition, we propose the joint FN1&POSTN score as an independent prognostic factor for OS. Based on our results, it may also be speculated that these proteins are related to tumor progression and/or may indicate fallopian–epithelial origin of the tumor. View Full-Text
Keywords: high-grade serous ovarian cancer; fibronectin; periostin; prognostic biomarkers; immunohistochemistry; tumor stroma high-grade serous ovarian cancer; fibronectin; periostin; prognostic biomarkers; immunohistochemistry; tumor stroma
►▼ Show Figures 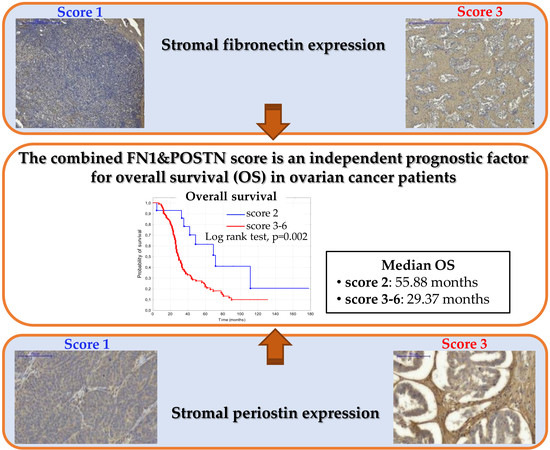