Knockout of the HvCKX1 or HvCKX3 Gene in Barley (Hordeum vulgare L.) by RNA-Guided Cas9 Nuclease Affects the Regulation of Cytokinin Metabolism and Root Morphology

Barley is among four of the most important cereal crops with respect to global production. Increasing barley yields to desired levels can be achieved by the genetic manipulation of cytokinin content. Cytokinins are plant hormones that regulate many developmental processes and have a strong influence on grain yield. Cytokinin homeostasis is regulated by members of several multigene families. CKX genes encode the cytokinin oxidase/dehydrogenase enzyme, which catalyzes the irreversible degradation of cytokinin. Several recent studies have demonstrated that the RNAi-based silencing of CKX genes leads to increased grain yields in some crop species. To assess the possibility of increasing the grain yield of barley by knocking out CKX genes, we used an RNA-guided Cas9 system to generate ckx1 and ckx3 mutant lines with knockout mutations in the HvCKX1 and HvCKX3 genes, respectively. Homozygous, transgene-free mutant lines were subsequently selected and analyzed. A significant decrease in CKX enzyme activity was observed in the spikes of the ckx1 lines, while in the ckx3 lines, the activity remained at a similar level to that in the control plants. Despite these differences, no changes in grain yield were observed in either mutant line. In turn, differences in CKX activity in the roots between the ckx1 and ckx3 mutants were reflected via root morphology. The decreased CKX activity in the ckx1 lines corresponded to greater root length, increased surface area, and greater numbers of root hairs, while the increased CKX activity in the ckx3 mutants gave the opposite results. RNA-seq analysis of the spike and root transcriptomes revealed an altered regulation of genes controlling cytokinin metabolism and signaling, as well as other genes that are important during seed development, such as those that encode nutrient transporters. The observed changes suggest that the knockout of a single CKX gene in barley may be not sufficient for disrupting cytokinin homeostasis or increasing grain yields. View Full-Text
Keywords: cytokinin; CKX; IPT; barley; CRISPR/Cas9; DEG cytokinin; CKX; IPT; barley; CRISPR/Cas9; DEG
►▼ Show Figures 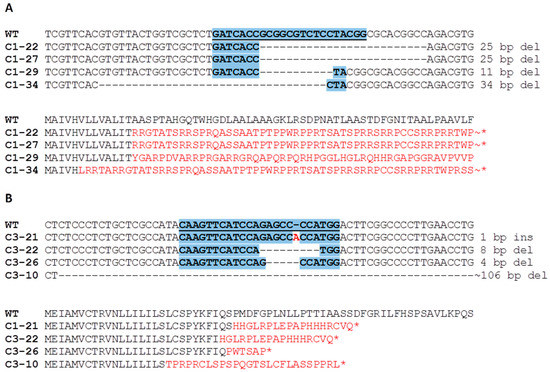