The imbalance between energy intake and energy expenditure is a well-known aspect of the escalating prevalence of obesity throughout the world as a major nutritional challenge [1,2]. Multiple factors like physical activity, dietary energy intake, basal metabolic rate, variation in environmental and body temperature are reported to influence energy expenditure [3,4]. Enhancement of energy expenditure is one of the cardinal approach toward prevention of body weight gain and obesity [5]. Numerous studies have reported the direct relation of cold exposure with non-shivering thermogenesis, followed by reduction in body fat [6,7,8]. Interestingly, clinical studies have also reported a vital link between cold-exposure and elevated energy expenditure through adaptive thermogenesis [9]. Studies on adipocytes have also reported a relationship between cold receptor, TRPM8 and energy expenditure showing upregulated expression of UCP-1 and PGC-1α owing to TRPM8 activation [10].
Complex physiology of the body makes it difficult to understand the exact mechanisms involved in energy expenditure. Transient receptor potential cation channel subfamily Melastatin member 8 (TRPM8) is a thermoreceptor present on the sensory nerve endings innervating the gut and skin [11,12,13] that senses non-noxious cold stimuli ranging from 18–25 °C, hence making it attractive target for cold mimicking. Involvement of TRPM8 dependent and independent pathways in mediating cold-induced energy expenditure is well reported. Recently we have published that anti-obesity effect of menthol, a TRPM8 agonist is mediated through glucagon dependent mechanisms particularly in adipose tissues [14]. Activation of TRPM8 receptors in the gut and skin by oral and topical administration of menthol leads to increase in serum glucagon levels, thus activating several downstream catabolic processes like glycogenolysis, gluconeogenesis, browning of white adipose tissue (WAT) and activation of energy expenditure markers in WAT and brown adipose tissue (BAT) [14]. This is supposedly an indirect action of menthol on adipose tissue wherein presence of TRPM8 is not essential. On the other hand, studies from our laboratory provide a strong evidence of significant expression of TRPM8 in undifferentiated (pre-adipocytes) and differentiated (adipocytes) 3T3-L1 cells suggesting its significance in adipogenesis [15]. Also, TRPM8 is functionally expressed in rodent WAT [16] and BAT [17] as well as human WAT [18]. Alternatively, Ma et al. showed that the mouse BAT expresses TRPM8 receptor which upon activation by menthol, significantly increased the levels of p-PKA that further phosphorylates the transcription factor cyclic AMP-responsive element-binding protein (CREB), ultimately leading to enhanced UCP1 expression [17,19]. Thus, chronic dietary menthol increased thermogenesis, core body temperature, prevented diet-induced obesity and the abnormal glucose homeostasis in wild-type mice but not in UCP1(−/−) and TRPM8(−/−) mice [17], suggesting TRPM8 receptor presence on adipose tissue is essential. Other studies also demonstrated the induction of white-to-brown-like phenotype through TRPM8 activation on human WAT [18,20], summarizing the importance of the presence of TRPM8 on adipose tissue.
We hypothesize that different TRPM8 dependent and independent actions are contributing to the anti-obesity effect of menthol. The present study is an attempt to reveal whether topical (10% w/v) or oral (200 mg/kg, p.o.) administration of menthol used during acute studies in our previous work is bioavailable at subcutaneous adipose tissue (direct or through serum). Further, using in-vitro 3T3L1 cell line model, we attempted to study that whether bioavailable menthol at subcutaneous adipose tissue is sufficient to induce direct effect on “browning” and mitochondrial energy metabolism followed by enhanced energy expenditure effects. Furthermore, this manuscript endeavours to elucidate the presence of metal ions and their role in mitochondrial electron transport chain for significant elevation in energy expenditure owing to the menthol treatment.

Both serum and adipose tissue samples were extracted fromDCM containing 200 ng/mL of thymol as internal standard. The samples were continuously vortexed for 3 min and centrifuged at 6000 rpm for next 3 min. After centrifugation, the supernatant was isolated and again extracted in DCM as discussed above. The supernatant finally obtained was used for the pharmacokinetic evaluation of menthol both in serum and adipose tissue.

Separation and detection was done by injecting 1 µL of target analyte in gas chromatograph (Agilent 7890B) equipped with split less injector system and flame ionization detector. Ultra-pure nitrogen gas was passed through a molecular sieve and oxygen trap and was used as carrier gas with flow rate of 1 mL/min. The injection port was held at 240 °C operated at split less mode. Separation was done using DB5 capillary column (Agilent Technologies) with dimension 30 m × 320 µm × 1 µm with oven temperature kept at 40 °C and then increased to 250 °C at the rate of 10 °C/min, hold time for 2 min. and sample run time for 23 min. the FID temperature was maintained at 280 °C for detection. Flow of hydrogen gas used for FID was at the rate of 30 mL/min. The flow of air for FID was 300 mL/min along with makeup flow at the rate of 25 mL/min. Calculations were done using EZ Chrome Software (Menlo Park, CA, USA).

Mouse 3T3-L1 pre-adipocytes were allowed to culture in basal medium comprising DMEM supplemented with 10% v/v FBS and 1% penicillin-streptomycin. Whole cell culture was maintained at 37 °C in a humidified incubator along with continuous supply of 95% O2 and 5% CO2. At 60% confluency, cellular differentiation from 3T3-L1 pre-adipocytes to adipocytes was induced using differentiation medium containing basal medium supplemented with 0.1 mM IBMX, 0.1 µM DMS and 1 µg/mL insulin for 48 h. Stock solutions of 0.1 µM DMS and 0.1 mM IBMX were prepared in absolute ethanol and DMSO respectively and were directly supplemented to DMEM culture medium. Further, the cells were shifted to maintenance medium (basal medium with 1 µg/mL insulin) for 10 days with medium replacement on every alternate day. Working solutions of 1, 50, 100, 200 and 300 µM menthol for the treatment were also prepared in absolute ethanol and directly supplemented to culture (differentiation/maintenance) medium during adipogenesis. Dose selection of menthol for in-vitro study was done on the basis of in-vivo pharmacokinetic profile of menthol in serum and adipose tissues. Two different sets of experiments were performed, (A) Effect of menthol administration at different doses (1, 10, 30 and 50 µM during adipogenesis. (B) Effect of menthol administration (1 µM) on matured adipocytes after 1 h of treatment. The entire cell culturing experiments were carried out as per American Type Culture Collection (ATCC) guidelines.

Cell cytotoxicity was assessed using MTT assay. Undifferentiated 3T3-L1 preadipocyte cells were seeded in a 96 well plate at density of 1 × 104 cells/well and incubated with varying concentrations (50, 100 and 300 µM) of menthol dissolved in <0.001% ethanol at 37 °C for 24 h. For control, undifferentiated pre-adipocytes treated with ethanol (<0.001%) were taken. After 24 h, media was replaced with MTT as per the instructions by manufacturer (Sigma Aldrich Co., St. Louis, MO, USA). Formazan crystals formed by live cells are solubilized in isopropanol and absorbance was measured at 570 nm using microplate reader (Spectra max M5e, Molecular Devices LLC, San Jose, CA, USA) [21].

A stock solution of 0.5% w/v of ORO was prepared IPA and was stored at room temperature. A working solution of ORO stain was prepared by diluting the stock solution with distilled water in the ratio 3:2. For staining, the supernatant in the culture plates after treatment with varying concentrations of menthol (1, 50 and 200 µM) was removed and cells were washed using PBS. After washing, mature adipocytes were fixed with 10% v/v formaldehyde in PBS and kept for 30 min at room temperature followed by three subsequent washing with PBS. Then, the PBS was aspirated and 60% of IPA was added followed by incubation for 5 min. Further, the cells were stained in ORO working solution filled in culture plates to completely cover the plate bottom (1.25 mL per well for 6-well culture plate) and kept for incubation for 10 min. The cells were then washed with 60% IPA to rinse away excess ORO dye followed by final elution of dye in 100% IPA (2.5 mL per well for 6-well culture plate). The plates were again kept for incubation at room temperature for 10 min. Now, 200 µL of each eluate was added to a 96 well microtiter plate. Also, 200 µL of 100 % IPA was filled on the same microtiter plate as blank. Finally, intracellular lipid content was quantified after extracting ORO bound cells with 100% IPA and absorbance was taken at 570nm using Nano Quant–Infinite M200 Pro (Tecan, Switzerland) [22,23].

No change in cell viability was observed with menthol treatment in comparison to the vehicle treated group up to 300 µM dose (Figure 2A). Oil red O staining is used as a quantitative method to analyse the difference in the degree of differentiation and lipid accumulation in adipocytes in cell culture. The effect of varying concentrations of menthol (1 µM, 50 µM, 100 µM and 200 µM) was evaluated during adipogenesis. Slight decrease in lipid accumulation was observed with menthol 1 µM dose as compared to vehicle treated group and no change was observed with 50 and 200 µM doses (Figure 2B). No significant difference in cellular differentiation of 3T3-L1 cells was observed between the vehicle and menthol treated cells (Figure 2C).

Over all, summarizing this study, we have provided evidence that a single dose of menthol is sufficiently bioavailable to induce energy expanding “brite” phenotype in differentiating adipocytes which is dependent on TRPM8 at a lower concentration (Figure 7). These findings can be further exploited to devise dietary (mint based nutraceuticals) or non-dietary (cold mimicking) approaches to combat obesity and type-2 diabetes.

Department of Science and Technology (DST/INT/PLO/P-22/2016/G), Government of India under Indo-Polish Bilateral program.

Authors would like to thank Department of Science and Technology (DST/INT/PLO/P-22/2016/G), Government of India for research grant given to National Agri-Food Biotechnology Institute (NABI) and Mahendra Bishnoi under Indo-Polish Bilateral program. 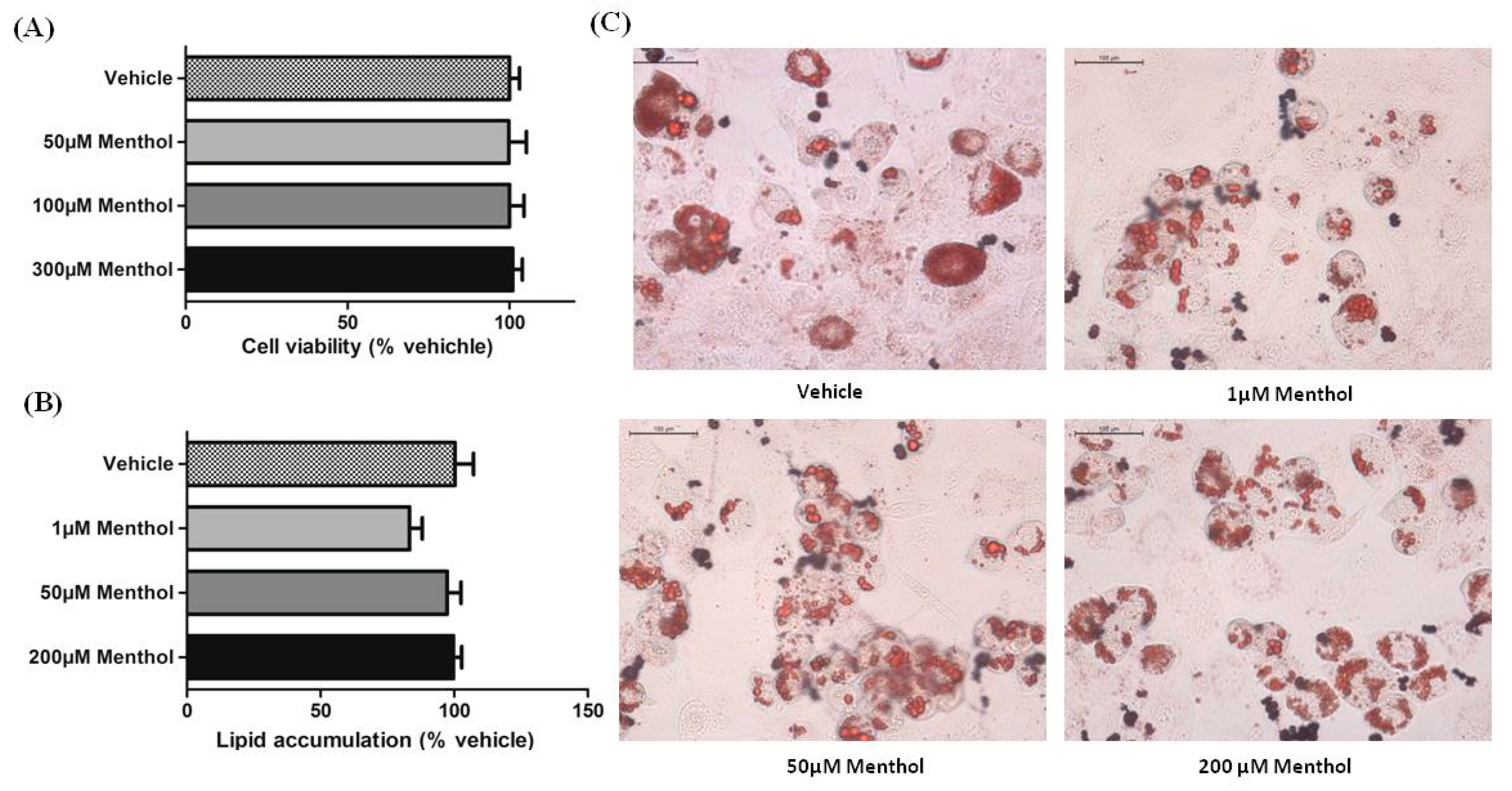 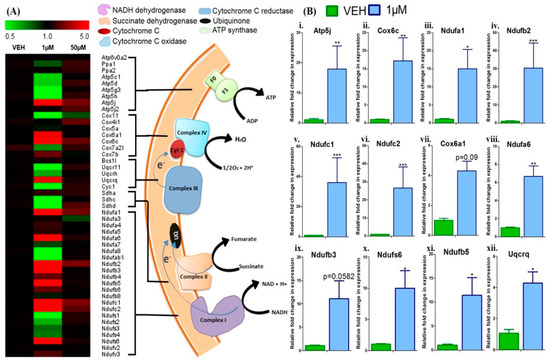 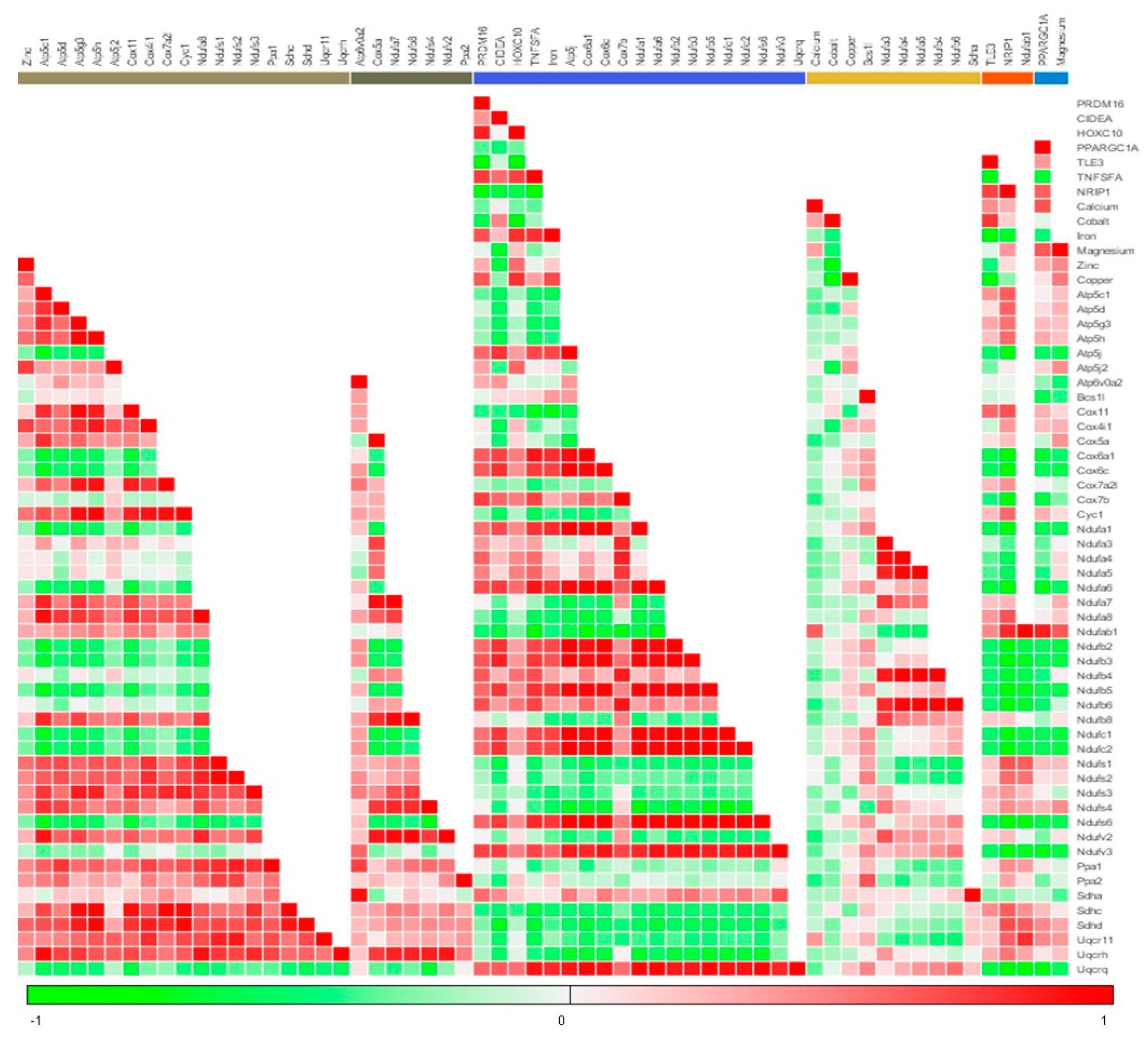 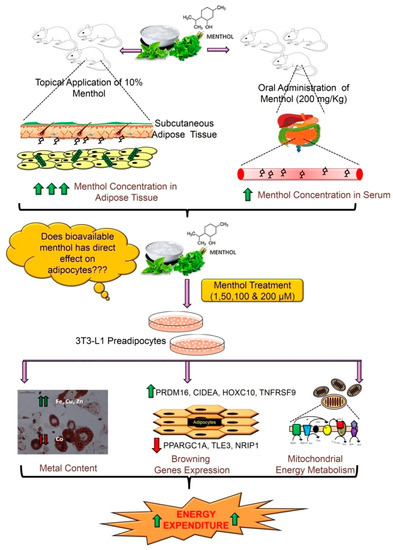 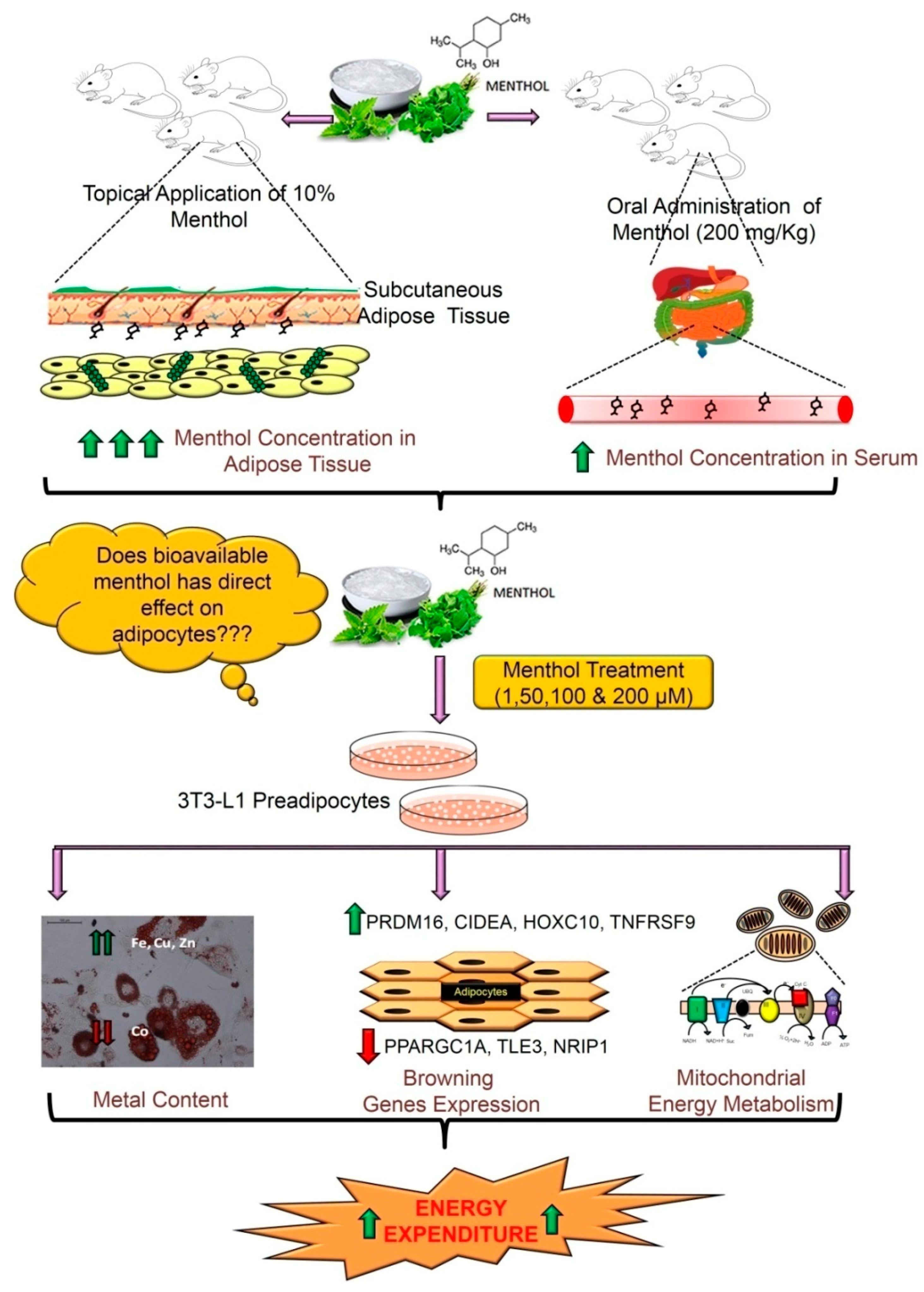