Behavior of Metalloproteinases in Adipose Tissue, Liver and Arterial Wall: An Update of Extracellular Matrix Remodeling
Previous Article in Journal

The accumulation of extracellular matrix in lung diseases involves numerous factors, including cytokines and chemokines that participate in cell activation in lung tissues and the circulation of fibrocytes that contribute to local fibrotic responses. The transient overexpression of the gp130 cytokine Oncostatin M can induce extracellular matrix (ECM) accumulation in mouse lungs, and here, we assess a role for IL-13 in this activity using gene deficient mice. The endotracheal administration of an adenovirus vector encoding Oncostatin M (AdOSM) caused increases in parenchymal lung collagen accumulation, neutrophil numbers, and CXCL1/KC chemokine elevation in bronchioalveolar lavage fluids. These effects were similar in IL-13-/- mice at day 7; however, the ECM matrix induced by Oncostatin M (OSM) was reduced at day 14 in the IL-13-/- mice. CD45+col1+ fibrocyte numbers were elevated at day 7 due to AdOSM whereas macrophages were not. Day 14 levels of CD45+col1+ fibrocytes were maintained in the wildtype mice treated with AdOSM but were reduced in IL-13-/- mice. The expression of the fibrocyte chemotactic factor CXCL12/SDF-1 was suppressed marginally by AdOSM in vivo and significantly in vitro in mouse lung fibroblast cell cultures. Thus, Oncostatin M can stimulate inflammation in an IL-13-independent manner in BALB/c lungs; however, the ECM remodeling and fibrocyte accumulation is reduced in IL-13 deficiency. View Full-Text
Keywords: inflammation; fibrocytes; ECM accumulation; cytokines; Oncostatin M; fibrosis inflammation; fibrocytes; ECM accumulation; cytokines; Oncostatin M; fibrosis
►▼ Show Figures 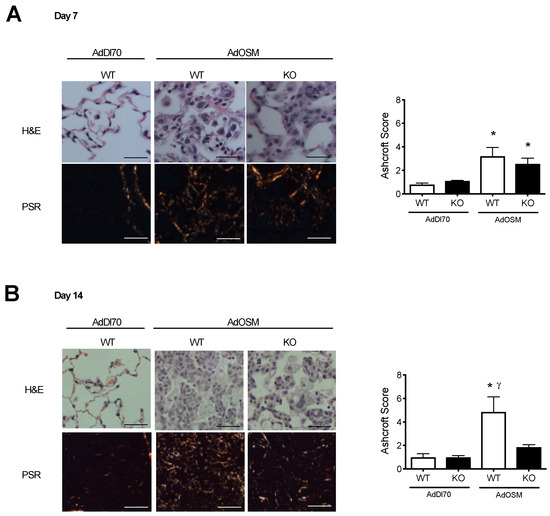