Induced pluripotent stem cells (iPSCs) were generated with a CytoTune-iPS 2.0 Sendai reprogramming kit following a previously described protocol [24,25]. Briefly, each fibroblast line was transduced and cultured in one well of a 48-well plate. Cells were maintained in reprogramming medium 1, and the medium was replaced every other day. On day 4, cells were replated onto a Matrigel pre-coated 48-well plate with different cell numbers and cultured in reprogramming medium 2. Medium was replaced every other day. At day 20, the medium was switched to Essential 8 medium, and cells were fed every day until day 25. For the first three passages, selected colonies were cultured and expanded in Essential 8 medium. iPSCs were further cultured in either StemFlex or mTeSR1 medium on Matrigel pre-coated six-well plates. Passaged every three to five days, iPSCs were loosened from the plates with 0.5 mM ethylenediaminetetraacetic acid (EDTA) upon reaching 70% to 80% confluence.

NSC lines were generated using the PSC Neural Induction Medium as described in the manufacturer’s manual (A1647801, Thermo Fisher Scientific, Waltham, MA, USA). Briefly, iPSCs cultured in StemFlex were split—a small portion of the cells was separated out for cell counting after further dissociation—and the remaining cell clumps were seeded into six-well plates at a density of 3 × 105 cells/well. Cells were switched into PSC Neural Induction Medium after 24 h and fed every other day. After day 4, the medium was changed every day. At day 7, primitive NSCs were harvested with Accutase and seeded in Matrigel pre-coated T75 flasks in NSC expansion medium. Cells were fed every day and reached confluence after five days. ROCK inhibitor Y27632 (5 µM) was added to the NSC expansion medium at the time of plating before the fourth passage.

Cells were fixed in 4% paraformaldehyde for 15 min, rinsed with Dulbecco’s phosphate buffered saline (DPBS), and permeabilized with 0.5% Triton X-100 for 10 min at room temperature prior to immunostaining. Nonspecific sites were first blocked with cell staining buffer (BioLegend, San Diego, CA, USA) for 1 h at room temperature. Cells were then incubated with primary antibodies (Table S1) overnight at 4 °C. After rinsing three times with DPBS, cells were stained with corresponding secondary antibodies for 1 h at room temperature (Table S1). Cells were rinsed once, and the nuclei were stained with Hoechst 33342 for 15 min at 37 °C. After another two rinses, followed by filling with DPBS, cells were visualized using an IN Cell Analyzer 2500 imaging system (GE Healthcare, Port Washington, NY, USA).

NSCs were seeded on 96-well plates pre-coated with CTS CELLstart substrate at a density of 3000 to 5000 cells per well. The medium was changed to StemPro NSC SFM medium supplemented with the desired treatment and 3% fetal bovine serum (FBS) on the next day. After a 72 h incubation period, cells were first washed with warm StemPro NSC SFM medium and switched into medium containing 50 nM LysoTracker red or 1 µM of Nile red dye. For LysoTracker staining, cells were incubated for 30 min at 37 °C; for Nile red staining, cells were incubated for 10 min at 37 °C. After incubation, cells were fixed with 4% paraformaldehyde, and the nuclei were stained with Hoechst 33342 for 15 min at 37 °C. After rinsing with DPBS, cells were imaged on an IN Cell Analyzer 2500 imaging system (GE Health) at 20X magnification.

NSCs were harvested using Accutase and washed once with cold DPBS. Cell pellets were resuspended in cold water and separated into two portions. One portion was used to measure the protein concentration via a bicinchoninic acid (BCA) assay after lysis in cold RIPA buffer. The other portion was used to quantify the total amount of cellular glycogen with the glycogen colorimetric/fluorometric assay kit (K646, BioVision, Milpitas, CA, USA).

Recombinant human GAA (rhGAA) enzyme was obtained from the residual solution after the clinical infusions of Lumizyme (Sanofi Genzyme, Cambridge, MA, USA). The enzyme solution was stored in 30% glycerol at −80 °C. For Nile red or LysoTracker staining, NSCs were seeded on black, clear bottom, 96-well plates pre-coated with CTS CELLstart substrate at a density of 3000 to 5000 cells per well. The medium was changed to StemPro NSC SFM medium supplemented with rhGAA and 3% FBS on the next day. Recombinant human GAA was removed after 12 h. After a 72-h incubation, Nile red or LysoTracker staining was performed. For GAA assay and glycogen quantification, NSCs were seeded on 12-well plates pre-coated with Matrigel at a density of 105 to 2 × 105 cells per well, followed by the same treatment procedure. After a 72-h incubation, cells were washed twice with DPBS and harvested using Accutase. After another two cold DPBS washes, cells were examined with either GAA or glycogen assays as described earlier.

2.10. Treatment with HPβCD and δ-Tocopherol

Cells were seeded on 96-well plates pre-coated with CTS CELLstart substrate. The medium was changed to StemPro NSC SFM medium supplemented with the desired treatment and 3% FBS on the next day. After a 72-h incubation, cells were examined with either LysoTracker or Nile red staining as described earlier.

Three Pompe disease patient dermal fibroblast lines obtained from Coriell Cell Repositories (GM20122, GM00248, and GM00338) were reprogrammed into three iPSC lines: NCATS-CL9316, NCATS-CL9317, and NCATS-CL9318. All Pompe disease cell lines carried the homozygous nonsense mutation p. R845X in GAA according to the gene mutation data from Coriell. The R854X mutation is prevalent in patients of African or African American descent with an allele frequency of 0.2% [27]. These iPSC lines showed a typical iPSC morphology and expressed pluripotency markers as shown in Figure S1A, including SOX2, Nanog, and Oct4 in the nuclei, and Tra-1-60 and SSEA4 on the plasma membrane in the NCATS-CL9316 and NCATS-CL9318 iPSC lines, while the characterization of iPSC line NCATS-CL9317 (formerly named as TRNDi007-B) was reported in detail previously [28]. Cell line identities were verified through a short tandem repeat (STR) DNA analysis (data upon request) and all iPSCs maintained a normal karyotype (Figure S1B). The three Pompe disease iPSC lines generated from Pompe disease patient samples also showed a normal growth rate compared to wild type iPSC controls (iPSC HT268A, derived from health donor fibroblasts GM05659 [29]).

To test the efficacy of therapeutic agents on neuronal cells, Pompe disease iPSCs were subsequently differentiated into NSCs, which is relatively easy to be generated and this differentiation is highly reproducible. NSC markers, including SOX1 and SOX2 in the nuclei and Nestin in the plasma membrane of these cells were observed with immunocytochemistry staining (Figure 1A). We then examined disease phenotypes in three patient-derived NSC lines compared to a control (Ctrl) NSC line (Fibroblast Coriell ID: GM05659, iPSC ID:HT268A) [29]. No GAA enzyme was detected by western blotting in the Pompe disease NSCs (Figure 1B); the same was also observed in the patient-derived fibroblasts, the source cells from Coriell Cell Repository [30]. All three Pompe disease cell lines harbored a homozygous nonsense mutation p. R845X in GAA, resulting in no detectable mRNA for GAA and essentially no GAA activity in patient fibroblasts [31]. Next, GAA enzyme activity was examined in these NSCs. All Pompe disease NSCs showed no GAA activity, suggesting the GAA deficiency nature was preserved in the Pompe disease NSCs (Figure 1C).
Because the deficiency of GAA leads to glycogen build-up in patient cells, we investigated glycogen levels in the Pompe disease NSCs using a biochemical assay [26] and found that total intracellular glycogen increased in all three Pompe disease NSC lines compared with the control cells (Figure 1D). The NCATS-CL9316 and NCATS-CL9318 NSCs exhibited a 2.3- to 2.5-fold glycogen increase, and NCATS-CL9317 NSCs showed a 6-fold increase. Together, the patient NSCs had negligible GAA activity accompanied with the accumulation of glycogen. The replication of Pompe disease patient phenotypes in these iPSC differentiated NSCs indicated that these cells could serve as a cell-based disease model to study Pompe disease pathophysiology.

To characterize disease phenotypes in the patient-derived cells, we used LysoTracker dye staining to measure enlarged lysosomes and Nile red dye staining to determine secondary lipid accumulation. LysoTracker, an acidotropic reagent, is used to visualize acidic vesicles in cells, and its staining increases in patient cells of many lysosomal storage diseases [32]. Total fluorescent intensity of LysoTracker staining increased in all Pompe disease NSCs after the addition of FBS containing lipids to the cells (Figure 2A). The NCATS-CL9316 and NCATS-CL9317 NSCs showed 3.5- to 3.7-fold increases in LysoTracker staining, while the NCATS-CL9318 NSCs showed an 8-fold increase, compared with control NSCs (Figure 2B), indicating enlarged lysosomes in the Pompe disease patient-derived NSCs. As previously reported that secondary lipid accumulation occurred in the Pompe disease patients [33,34], we found that all Pompe disease NSCs showed 1.7- to 2.0-fold increases of the Nile red dye staining (Figure 2C,D), indicating the accumulation of nonpolar lipids. The increases of LysoTracker and Nile red staining evidenced the phenotypical changes of enlarged lysosomes and the secondary accumulation of lipids in Pompe disease NSCs.

To determine the effect of enzyme replacement therapy in the Pompe disease NSCs, we applied recombinant human GAA protein (rhGAA) to these patient-derived cells. After a 12-h treatment followed by a three-day incubation, GAA activity significantly increased (Figure 3A). In a dose-dependent manner, total intracellular glycogen and LysoTracker intensity in all patient lines decreased with higher rhGAA concentrations (Figure 3B–D). At 0.17 mg/mL rhGAA, a 30% reduction in LysoTracker staining was observed for the NCATS-CL9316 NSCs, 40% for the NCATS-CL9317 NSCs, and 20% for the NCATS-CL9318 NSCs (Figure 3C,D). However, we did not observe significant effects of rhGAA on the Nile red staining (Figure S2A), indicating a limited effect on the secondary lipid accumulation in these Pompe disease cells.

This work was supported by the Intramural Research Programs of the National Center for Advancing Translational Sciences, National Institutes of Health.

This work was supported by the Intramural Research Programs of the National Center for Advancing Translational Sciences, National Institutes of Health. The authors thank DeeAnn Visk for editing the manuscript. 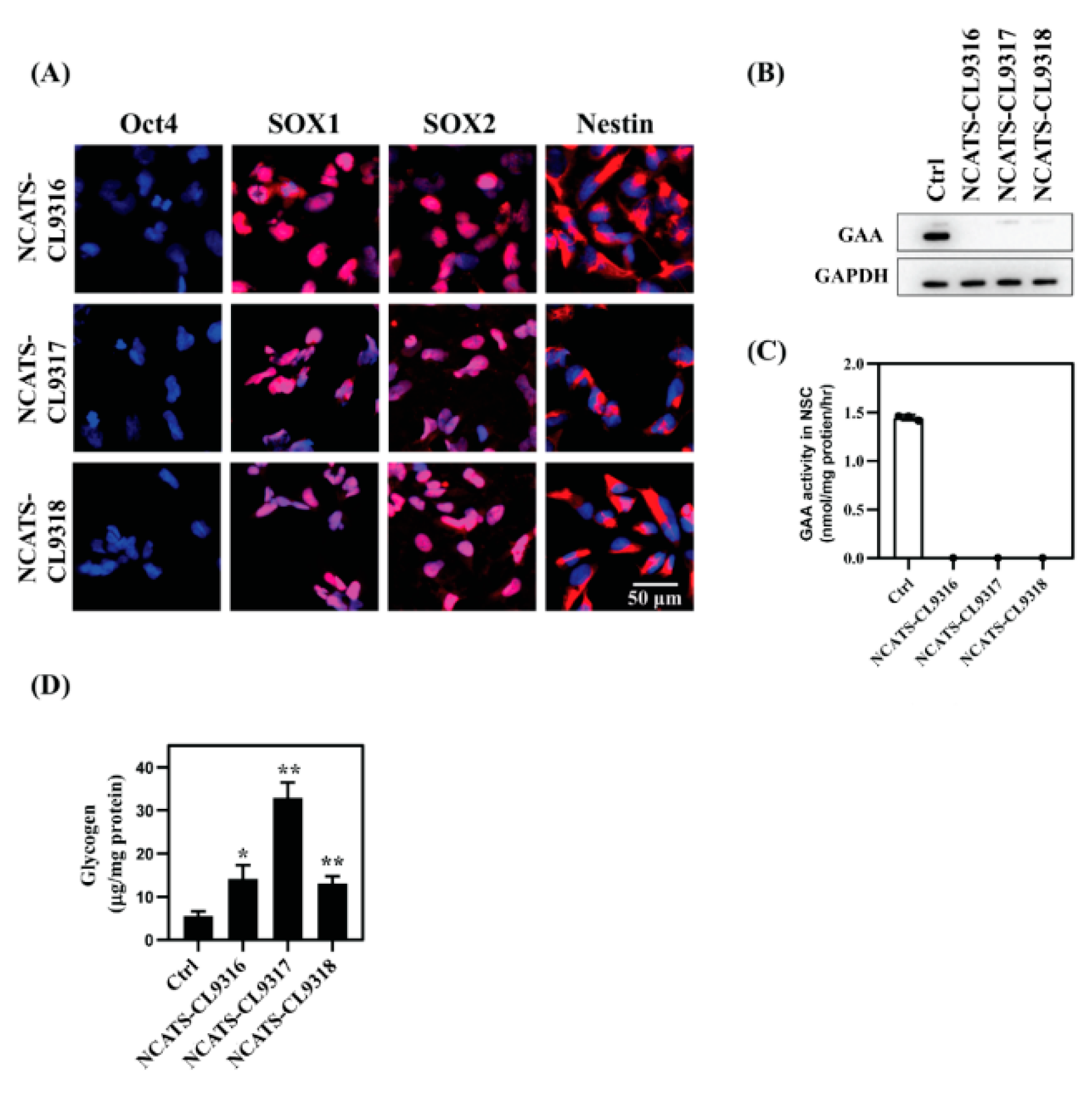 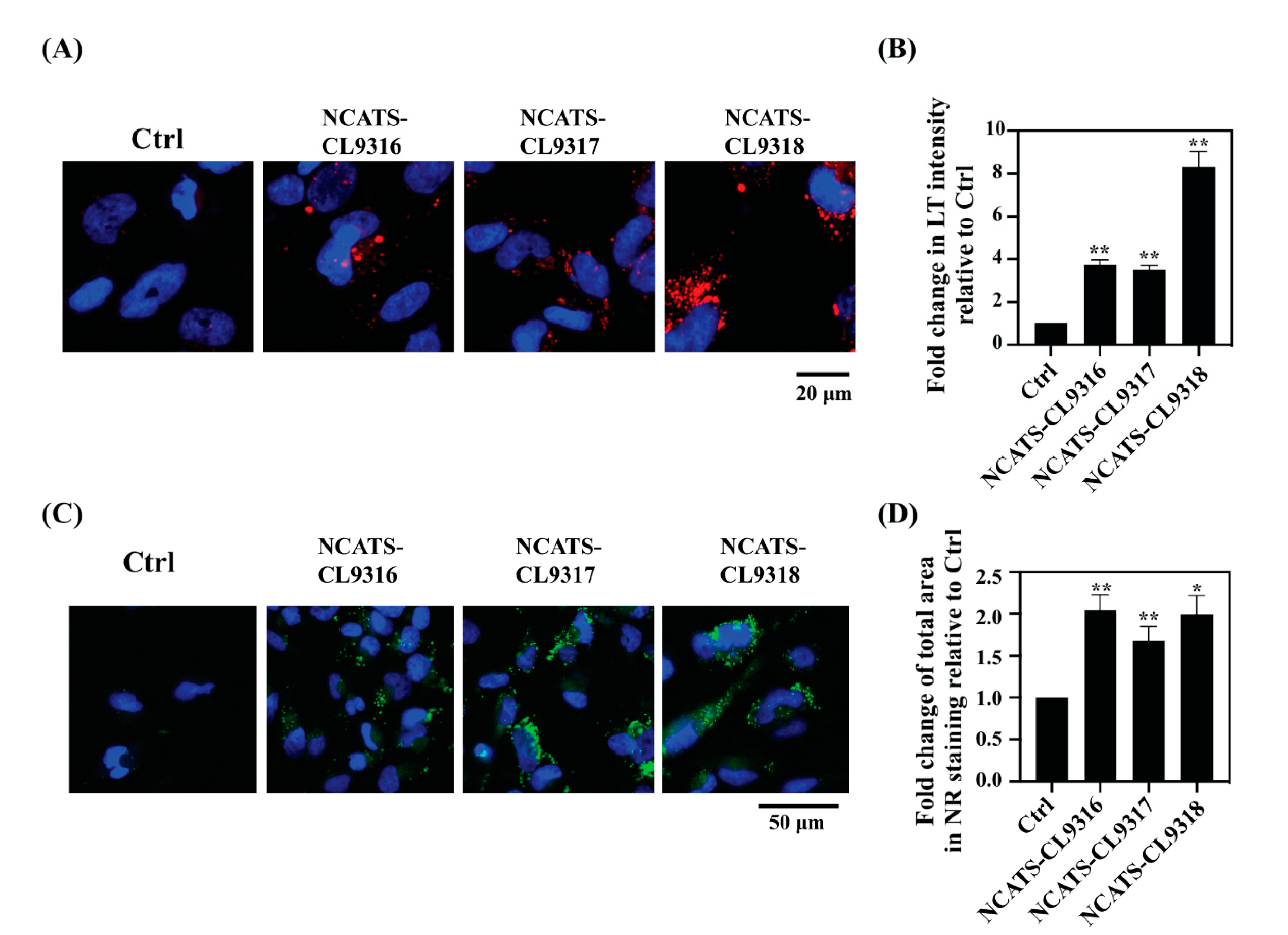