Cherry and Fresh Market Tomatoes: Differences in Chemical, Morphological, and Sensory Traits and Their Implications for Consumer Acceptance

Exploiting Genetic and Genomic Resources to Enhance Heat-Tolerance in Tomatoes

High temperature is one of the most detrimental abiotic stresses in tomatoes. Many studies highlighted that even small increases in temperature can alter the plant reproductive system, causing a significant reduction in tomato yield. The aim of this study was to exploit the phenotypic and genomic variations of a tomato landrace collection grown at high temperatures. Fifteen genotypes were selected as the best performing in two experimental fields. The selection was based on six yield-related traits, including flower earliness, number of flowers per inflorescence, fruit set, number of fruit per plant, fruit weight and yield per plant. In order to identify markers targeting traits that could be highly influenced by adverse climate conditions, such as flowering and fruit setting, an association mapping approach was undertaken exploiting a tomato high-throughput genomic array. The phenotypic variability observed allowed us to identify a total of 15 common markers associated with the studied traits. In particular, the most relevant associations co-localized with genes involved in the floral structure development, such as the style2.1 gene, or with genes directly involved in the response to abiotic stresses. These promising candidate genes will be functionally validated and transferred to a cultivated tomato to improve its performance under high temperatures. View Full-Text
Keywords: tomato landraces; yield-related traits; selection index; SolCAP genomic platform; SNP; association mapping; candidate genes tomato landraces; yield-related traits; selection index; SolCAP genomic platform; SNP; association mapping; candidate genes
►▼ Show Figures 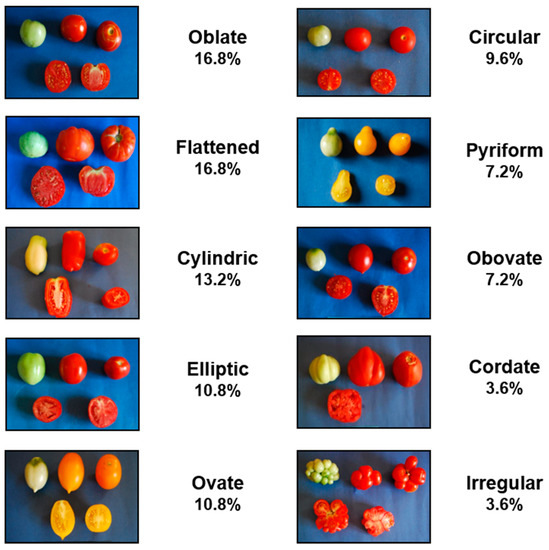