Microorganisms are involved in a network of interactions with plants, promoting growth and acting as biocontrol agents against diseases. In this work, we studied native microorganisms associated with quinoa plants (Chenopodium quinoa) and the application of these organisms to the organic production of quinoa in the Andean Altiplano. Quinoa is a non-cereal grain native to the Andean highlands and is highly nutritious and gluten-free. As such, the international demand for quinoa has increased substantially in recent years. We isolated native endophytic bacteria that are able to fix nitrogen, solubilize phosphate and synthesize a phytohormone and native strains of Trichoderma, a fungus typically used for increasing plant growth and tolerance to biotic and abiotic stresses. Greenhouse assays and field trials allowed for selecting promissory bacterial isolates, mostly belonging to Bacillus and Paenibacillus genera, that increased plant length, panicle weight and grain yield. Selected microbial isolates were large-scale multiplied in simple and inexpensive culture media and then formulated to obtain bioproducts that were distributed among local farmers. Thus, we developed a technology for the exploitation of beneficial microbes, offering promising and environmentally friendly strategies for the organic production of quinoa without perturbing the native microbial diversity of Andean soils and making them more resilient to the adverse effects of climatic change and the over-production of quinoa. View Full-Text
Keywords: plant growth-promoting bacteria; Trichoderma; endophytes; quinoa; Andean Altiplano; soil plant growth-promoting bacteria; Trichoderma; endophytes; quinoa; Andean Altiplano; soil
►▼ Show Figures 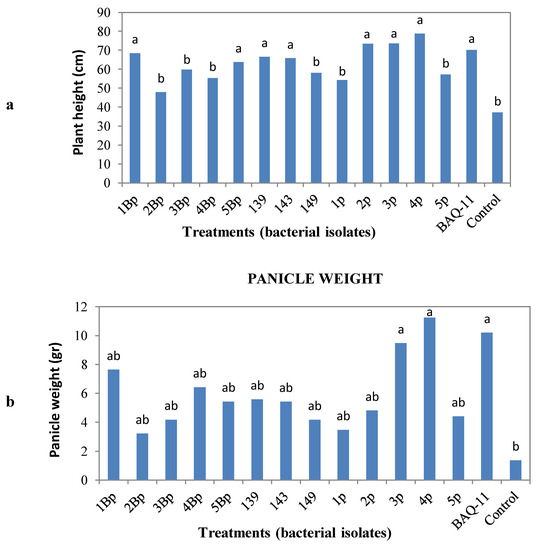