Identification and Characterisation of New Microbial Antagonists for Biocontrol of Monilinia laxa, the Causal Agent of Brown Rot on Stone Fruit

Currently, there is little knowledge of the establishment of repeatedly applied biological control agents (BCAs) in the phyllosphere of plants and, in particular, their interactions with the resident microbiome. Under field conditions, the BCA Aureobasidium pullulans was applied as a model organism to organically grown strawberries during two subsequent years (2011, 2012), either as single strain treatment or with the co-application of the entomopathogenic fungus Beauveria bassiana. Fungal and bacterial communities of strawberry leaves were investigated by means of plate counts and 454 pyrosequencing. The establishment of the introduced A. pullulans strains considerably differed between the two years, presumably due to distinct environmental conditions. Short-term and long-term effects of BCA applications on the composition and diversity of fungal communities could be observed as a result of successful establishment of A. pullulans, in 2011, showing, for instance, reduced diversity of fungal communities by competitive displacement shortly after BCA introduction. Due to considerable dynamics in untreated resident microbial communities in the phyllosphere in general, however, we suggest that even the effects caused by the applied BCA preparations in 2011 are negligible under practical conditions. View Full-Text
Keywords: biological control agents: BCAs; microbial communities; organic farming; plate counts; 454 pyrosequencing biological control agents: BCAs; microbial communities; organic farming; plate counts; 454 pyrosequencing
►▼ Show Figures 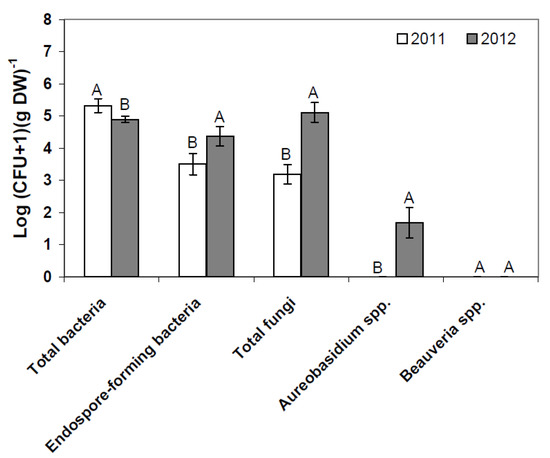 Sylla, J.; Alsanius, B.W.; Krüger, E.; Reineke, A.; Bischoff-Schaefer, M.; Wohanka, W. Introduction of Aureobasidium pullulans to the Phyllosphere of Organically Grown Strawberries with Focus on Its Establishment and Interactions with the Resident Microbiome. Agronomy 2013, 3, 704-731. https://doi.org/10.3390/agronomy3040704


Sylla J, Alsanius BW, Krüger E, Reineke A, Bischoff-Schaefer M, Wohanka W. Introduction of Aureobasidium pullulans to the Phyllosphere of Organically Grown Strawberries with Focus on Its Establishment and Interactions with the Resident Microbiome. Agronomy. 2013; 3(4):704-731. https://doi.org/10.3390/agronomy3040704