Evapotranspiration and Precipitation over Pasture and Soybean Areas in the Xingu River Basin, an Expanding Amazonian Agricultural Frontier

The partitioning between the soil solid phase and the soil solution determines the mobility of pollutants like heavy metals. If nonspecific sorption takes place, the reactions are easily reversible and heavy metals are released to soil solution increasing the probability of leaching through soil profile. Mobility and leaching are also favoured if other metals are in the system and competition for specific adsorption sites takes place. In this study, desorption equilibrium experiments were conducted after adsorption ones. The specific adsorption was evaluated through the amounts of the still adsorbed Cu, Pb, Cr, Ni and Zn after desorption experiments in ten different soils. In addition, competition adsorption and desorption binary experiments were conducted for evaluating the metal competition in three of the soils. Pb and Cu are the metals adsorbed and retained in higher amounts in all the studied soils. In slightly neutral soils, Cr is retained in lesser amounts while in acidic soils Zn is the metal less retained. Results showed that despite the high and variable amounts of organic matter in the soils, soil pH is the most important variable in neutral soils. In acidic soils, soil properties different than pH play important roles and specific sorption of Pb is related to the cationic exchange capacity of the soils while that of Zn to the clay content. Instead, the release of Cu during desorption experiments is probably due to the more soluble organic fraction of the soils. The individual retention of Cu, Zn, Ni and Pb is higher than when they are in competition, except if Cr is present. In this case, the amount of those four metals and that of Cr increased. Therefore, the presence of Cr together with cationic heavy metals favoured the adsorption of those metals in multi-metal polluted areas. Specific adsorption is also important during competition as soil affinities increase during competition experiments. View Full-Text
Keywords: copper; chromium; nickel; lead; zinc copper; chromium; nickel; lead; zinc
►▼ Show Figures 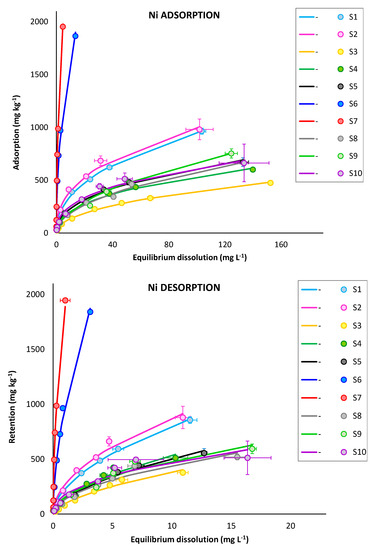