Image processing entered the era of artificial intelligence, and machine learning algorithms emerged as attractive alternatives for time series data processing. Satellite image time series processing enables crop phenology monitoring, such as the calculation of start and end of season. Among the promising algorithms, Gaussian process regression (GPR) proved to be a competitive time series gap-filling algorithm with the advantage of, as developed within a Bayesian framework, providing associated uncertainty estimates. Nevertheless, the processing of time series images becomes computationally inefficient in its standard per-pixel usage, mainly for GPR training rather than the fitting step. To mitigate this computational burden, we propose to substitute the per-pixel optimization step with the creation of a cropland-based precalculations for the GPR hyperparameters . To demonstrate our approach hardly affects the accuracy in fitting, we used Sentinel-2 LAI time series over an agricultural region in Castile and Leon, North-West Spain. The performance of image reconstructions were compared against the standard per-pixel GPR time series processing. Results showed that accuracies were on the same order (RMSE 0.1767 vs. 0.1564 , 12% RMSE degradation) whereas processing time accelerated about 90 times. We further evaluated the alternative option of using the same hyperparameters for all the pixels within the complete scene. It led to similar overall accuracies over crop areas and computational performance. Crop phenology indicators were also calculated for the three different approaches and compared. Results showed analogous crop temporal patterns, with differences in start and end of growing season of no more than five days. To the benefit of crop monitoring applications, all the gap-filling and phenology indicators retrieval techniques have been implemented into the freely downloadable GUI toolbox DATimeS. View Full-Text
Keywords: Gaussian processes regression; time series; crop monitoring; Sentinel-2; phenology indicators; optimization Gaussian processes regression; time series; crop monitoring; Sentinel-2; phenology indicators; optimization
►▼ Show Figures 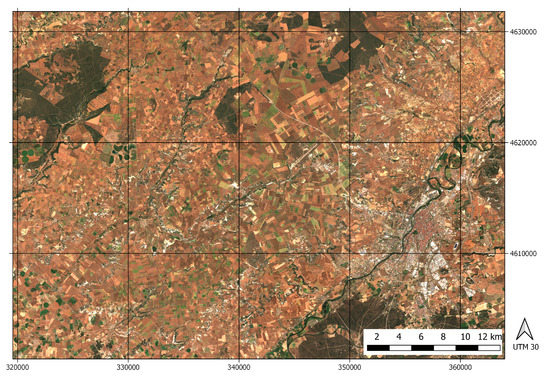