Opening New Gates for the Modification of PVC or Other PVC Derivatives: Synthetic Strategies for the Covalent Binding of Molecules to PVC
Previous Article in Special Issue

With the increase in structural applications of bio-based composites, the study of long-term creep behavior of these materials turns into a significant issue. Because of their bond type and structure, natural fibers and thermoset resins exhibit nonlinear viscoelastic behavior. Time-temperature superposition (TTS) provides a useful tool to overcome the challenge of the long time required to perform the tests. The TTS principle assumes that the effect of temperature and time are equivalent when considering the creep behavior, therefore creep tests performed at elevated temperatures may be converted to tests performed at longer times. In this study, flax fiber composites were processed with a novel liquid molding methacrylated epoxidized sucrose soyate (MESS) resin. Frequency scans of flax/MESS composites were obtained at different temperatures and storage modulus and loss modulus were recorded and the application of horizontal and vertical shift factors to these viscoelastic functions were studied. In addition, short-term strain creep at different temperatures was measured and curves were shifted with solely horizontal, and with both horizontal and vertical shift factors. The resulting master curves were compared with a 24-h creep test and two extrapolated creep models. The findings revealed that use of both horizontal and vertical shift factors will result in a smoother master curves for loss modulus and storage modulus, while use of only horizontal shift factors for creep data provides acceptable creep strain master curves. Based on the findings of this study, flax/MESS composites can be considered as thermorheologically complex materials. View Full-Text
Keywords: composites; creep; ester synthesis; flax fiber; time-temperature superposition composites; creep; ester synthesis; flax fiber; time-temperature superposition
►▼ Show Figures 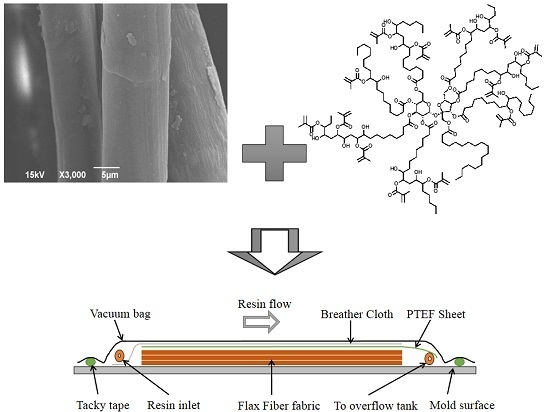