Correlations between Process Parameters and Outcome Properties of Laser-Sintered Polyamide

In this paper, the influence of the bulk temperature (BT) of Polycarbonate (PC) on the occurrence and growth of Laser-induced Periodic Surface Structures (LIPSS) is studied. Ultrashort UV laser pulses with various laser peak fluence levels and various numbers of overscans were applied on the surface of pre-heated Polycarbonate at different bulk temperatures. Increased BT leads to a stronger absorption of laser energy by the Polycarbonate. For High Spatial Frequency LIPSS (HSFL), Low Spatial Frequency LIPSS perpendicular (LSFL-I) and parallel (LSFL-II) to the laser polarization were only observed on the rim of the ablated tracks on the surface but not in the center of the tracks. For , it was found that when pre-heating the polymer to a BT close its glass transition temperature (), the laser fluence to achieve similar LIPSS as when processed at room temperature decreases by a factor of two. LSFL types I and II were obtained on PC at a BT close to and their periods and amplitudes were similar to typical values found in the literature. To the best of the author’s knowledge, it is the first time both LSFL types developed simultaneously and consistently on the same sample under equal laser processing parameters. The evolution of LIPSS from HSFL, over LSFL-II to LSFL I, is described, depending on laser peak fluence levels, number of pulses processing the spot and bulk temperature. View Full-Text
Keywords: polycarbonate; LIPSS; LSFL-I; LSFL-II; HSFL; LIPASS; bulk temperature polycarbonate; LIPSS; LSFL-I; LSFL-II; HSFL; LIPASS; bulk temperature
►▼ Show Figures 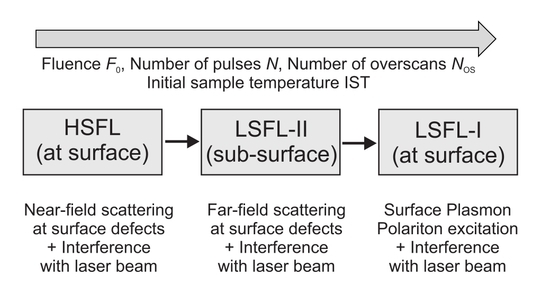