Recently, polyacrylates (PA) have been applied in coated controlled-release fertilizer (CRF), but the impacts of the soil on the degradation of PA have not been evaluated. In this study, an outdoor agriculture soil buried test was carried out for 12 months to investigate the degradation of PA films. The residual degraded films were taken regularly from the soil and analyzed by SEM, Fourier transform infrared photoacoustic spectroscopy (FTIR-PAS) and laser-induced breakdown spectroscopy (LIBS). The concentration of C–H and C=O molecular groups of PA were decreased, and the element concentrations of C, O, K, Si of PA were increased under the degradation process. The surface of PA became rough and the degradation of PA occurred on the surface layer. Principal component analysis (PCA) showed that soil invaded PA. The results indicated that PA were environmentally friendly when applied to CRF. FTIR-PAS and LIBS were advanced in the in-situ surface analysis of the degradation process of the polymer. View Full-Text
Keywords: polyacrylates; soil; degradation; FTIR-PAS; LIBS; PCA polyacrylates; soil; degradation; FTIR-PAS; LIBS; PCA
►▼ Show Figures 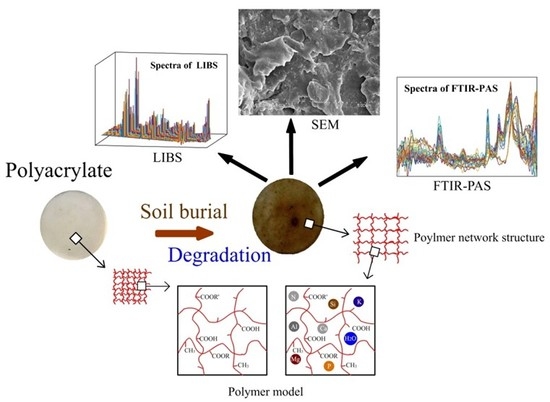