Osteosarcoma (OS) is a highly heterogenous cancer, making the identification of genetic driving factors difficult. Genetic factors, such as heritable mutations of Rb1 and TP53, are associated with an increased risk of OS. We previously generated pigs carrying a mutated TP53 gene, which develop OS at high frequency. RNA sequencing and allelic expression imbalance analysis identified an amplification of YAP1 involved in p53- dependent OS progression. The inactivation of YAP1 inhibits proliferation, migration, and invasion, and leads to the silencing of TP63 and reconstruction of p16 expression in p53-deficient porcine OS cells. This study confirms the importance of p53/YAP1 network in cancer.

Osteosarcoma (OS) is a primary bone malignancy that mainly occurs during adolescent growth, suggesting that bone growth plays an important role in the aetiology of the disease. Genetic factors, such as heritable mutations of Rb1 and TP53, are associated with an increased risk of OS. Identifying driver mutations for OS has been challenging due to the complexity of bone growth-related pathways and the extensive intra-tumoral heterogeneity of this cancer. We previously generated pigs carrying a mutated TP53 gene, which develop OS at high frequency. RNA sequencing and allele expression imbalance (AEI) analysis of OS and matched healthy control samples revealed a highly significant AEI (p = 2.14 × 10−39) for SNPs in the BIRC3-YAP1 locus on pig chromosome 9. Analysis of copy number variation showed that YAP1 amplification is associated with the AEI and the progression of OS. Accordingly, the inactivation of YAP1 inhibits proliferation, migration, and invasion, and leads to the silencing of TP63 and reconstruction of p16 expression in p53-deficient porcine OS cells. Increased p16 mRNA expression correlated with lower methylation of its promoter. Altogether, our study provides molecular evidence for the role of YAP1 amplification in the progression of p53-dependent OS. View Full-Text
Keywords: YAP1; TP53; TP63; p16; allelic expression imbalance; copy number variation; bone cancer; pig YAP1; TP53; TP63; p16; allelic expression imbalance; copy number variation; bone cancer; pig
►▼ Show Figures 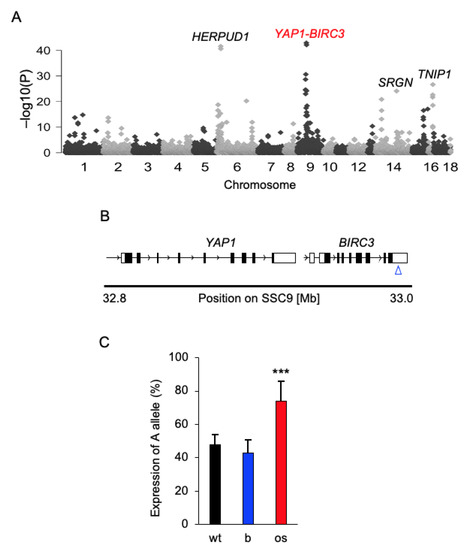