We describe an evolutionary game theory mathematical model to investigate the robustness and accuracy of adaptive chemotherapy schedules in a stochastic environment in a tumor. The model assumes tumors are made up of a finite cell population of chemo-sensitive cells, and two populations of resistant cells, each resistant to one of two separate drugs that can be administered on different schedules. The goal of the adaptive schedules are to delay chemoresistance in the tumor by keeping the cell populations in competition with each other without any of the populations reaching fixation leading to treatment failure.

We investigate the robustness of adaptive chemotherapy schedules over repeated cycles and a wide range of tumor sizes. Using a non-stationary stochastic three-component fitness-dependent Moran process model (to track frequencies), we quantify the variance of the response to treatment associated with multidrug adaptive schedules that are designed to mitigate chemotherapeutic resistance in an idealized (well-mixed) setting. The finite cell (N tumor cells) stochastic process consists of populations of chemosensitive cells, chemoresistant cells to drug 1, and chemoresistant cells to drug 2, and the drug interactions can be synergistic, additive, or antagonistic. Tumor growth rates in this model are proportional to the average fitness of the tumor as measured by the three populations of cancer cells compared to a background microenvironment average value. An adaptive chemoschedule is determined by using the limit of the finite-cell process (i.e., the adjusted replicator equations) which is constructed by finding closed treatment response loops (which we call evolutionary cycles) in the three component phase-space. The schedules that give rise to these cycles are designed to manage chemoresistance by avoiding competitive release of the resistant cell populations. To address the question of how these cycles perform in practice over large patient populations with tumors across a range of sizes, we consider the variances associated with the approximate stochastic cycles for finite N, repeating the idealized adaptive schedule over multiple periods. For finite cell populations, the distributions remain approximately multi-Gaussian in the principal component coordinates through the first three cycles, with variances increasing exponentially with each cycle. As the number of cycles increases, the multi-Gaussian nature of the distribution breaks down due to the fact that one of the three sub-populations typically saturates the tumor (competitive release) resulting in treatment failure. This suggests that to design an effective and repeatable adaptive chemoschedule in practice will require a highly accurate tumor model and accurate measurements of the sub-population frequencies or the errors will quickly (exponentially) degrade its effectiveness, particularly when the drug interactions are synergistic. Possible ways to extend the efficacy of the stochastic cycles in light of the computational simulations are discussed. View Full-Text
Keywords: chemotherapy schedules; adaptive chemotherapy; uncertainty quantification; Moran process model; evolutionary game theory model; evolutionary cycles; tumor chemoresistance chemotherapy schedules; adaptive chemotherapy; uncertainty quantification; Moran process model; evolutionary game theory model; evolutionary cycles; tumor chemoresistance
►▼ Show Figures 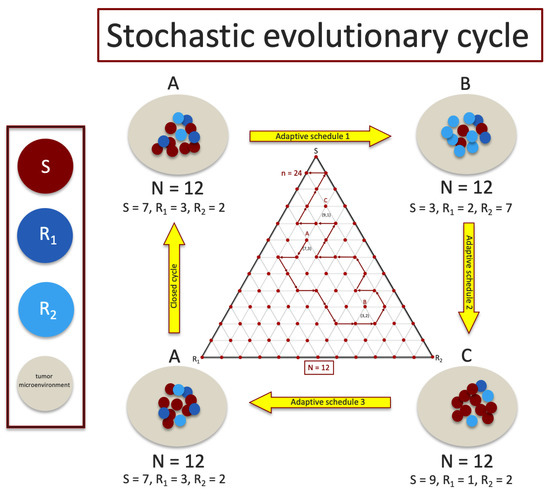 Paul K. Newton
Trained as an applied mathematician, Professor Newton’s work focuses on developing mathematical models for nonlinear dynamical processes in continuum mechanics and biophysics, currently focusing mostly on mathematical oncology and systems biology. After receiving his B.S. from Harvard and Ph.D. in Applied Math from Brown, Professor Newton spent two years in the Mathematics Department at Stanford before moving to UIUC as an Assistant, then Associate Professor of Mathematics and Complex Systems. He is currently a Professor of Applied Mathematics, Engineering, and Medicine in the Viterbi School of Engineering, the Dornsife College of Letters, Arts and Sciences, the Norris Comprehensive Cancer Center in the Keck School of Medicine, and a founding affiliate member of the LJ Ellison Institute for Transformative Medicine of USC. He currently serves as Editor-in-Chief of the Journal of Nonlinear Science (SpringerNature) and was elected AAAS Fellow in 2020.
Zoom | Orient | As Lines | As Sticks | As Cartoon | As Surface | Previous Scene | Next Scene
We use cookies on our website to ensure you get the best experience. Read more about our cookies here.
Accept
We have just recently launched a new version of our website. Help us to further improve by taking part in this short 5 minute survey here. here.
Never show this again