The Mechanical Microenvironment in Breast Cancer

Biophysics is a field of research that endeavors to understand biology from the standpoint of physics, by using physics-based theories and methods, which includes the physical/mechanical properties of cells and surrounding tissue (e.g., whether they are rigid or pliable). Mechanobiology is the study of the interaction between physical forces and cells, or even single biomolecules (e.g., proteins), and how mechanical cues alter cellular responses. Forces acting externally on cells (i.e., mechanical stimuli) include stretch, compression, tension, shear stress, and substrate rigidity or deflection. Through mechanosensation, cells sense changes in the prevailing intracellular and/or extracellular mechanical homeostasis on a molecular level, which ultimately initiates intracellular signaling. This translation of physical signals acting on cells to a cellular response via intracellular signaling is known as mechanotransduction.
This review on mechanobiology and mechanical signaling will begin at the junction between mechanical stimulus and cellular force-sensing mechanisms (i.e., mechanosensation), including the role of individual proteins and protein complexes. The resulting conversion of mechanical stimuli into electrical and chemical signals (i.e., mechanotransduction) that initiate a cell’s ultimate response will also be outlined. Furthermore, the bidirectional interaction between cells and their mechanical microenvironment, known as mechanoreciprocity, is considered. Finally, these ideas converge on the notion that the cell’s mechanical microenvironment and mechanotransduction signaling are dysregulated in breast cancer, which promotes cancer cell malignant phenotypes and tumor growth.

Sensation of the surrounding mechanical environment and resulting mechanotransduction responses represent a one-way directional signal from environment to the cell, however cells also produce signals that impact their environment. This bi-directional signaling between cell and environment (or even cell to cell) is termed dynamic reciprocity [100,101,102,103] or mechanoreciprocity [104,105]. Mechanoreciprocity has been defined as a process by which cells within a tissue “that become mechanically challenged must respond to the exogenous force by reciprocally exerting a proportional cell-generated force” [104], but more recently, mechanoreciprocity has been broadened to describe “a cyclic process in which cells modify the organization and elastic response of the environment and reciprocally adjust their behavior” [105]. Demonstrations of cell-ECM mechanoreciprocity come from studies using cells plated on substrates of different stiffness, as a means to apply a range of forces to cells and measure cell response, where cells were found to reciprocate forces and also modify their substrates. Cells exert stress on their substrates which deform, densify, stiffen, and align ECM [106,107,108,109]. Cells, in turn, respond to environmental stiffness with increased force generation and cell stiffening [106]. Indeed, cells can tune their stiffness to match the rigidities of their substrates [110] and, interestingly, substrate stiffness can guide preferential cell migration toward stiffer substrates [111,112,113]. Alternatively, stiffer 3D matrices can induce cells to contract their surrounding matrix and increase local collagen density, which in turn results in mature focal adhesion formation [114]. Other studies show that ECM alignment from cell-generated forces enhances and directs cell migration [108,115]. Other examples of mechanoreciprocity mechanisms come from cell migration studies in 3D matrices. ECM can mechanically constrain cell migration depending on the porosity of the matrix [116]; cells cannot pass through small pores due to limitations in nuclear deformability. Cells respond to these mechanical limitations with active degradation of the matrix to widen the pore size and the subsequent sensing of decreased spatial constriction allows cells to resume migration [116,117].
Thus, there can be a cyclical mechanical interplay between environmental cues and cell adaptation responses. Cells can sense the mechanical characteristics of their environment, and they can then respond by altering their mechanical/functional state or by modifying the environment, but they can also subsequently respond to the environment they modified. These interactions are normal under proper contexts, but can become pathological if the mechanical interplay fails to reach steady state. In the context of breast cancer chronic remodeling of the mechanical microenvironment, especially that of substrate/ECM, this promotes malignant cell functions and tumor formation [118,119].

4. Mechanical Forces and Signaling in the Normal Breast

Mounting observational and experimental evidence supports the presence of a variety of mechanical stimuli in breast cancer that help promote malignancy. While there have been efforts to therapeutically target mechanical signals in vivo such as suppressing lysyl oxidase ECM crosslinking [119], this has not yet translated to changing clinical patient standard of care. Therefore, mechanical signaling and breast cancer may need a fresh perspective. One gap in knowledge is the mechanism by which non-tumorigenic breast epithelial cells and breast cancer cells respond and integrate acute mechanical stress. Of note, some mechanical stresses are more acute and dynamic than others. New ways of assessing the effects of mechanical stress in normal and malignant mammary epithelial cells may provide novel insights into the potential roles for the rapid mechano-chemical signaling that has already been demonstrated in many cell types. Indeed, mechanosensation and mechanotransduction mechanisms such as ion channel activation often operate on rapid timescales, and the rapid responsiveness of breast epithelial cells to mechanical stimuli, such as with Ca2+ signaling, has already been established. Especially when considering studies of breast cancer ECM stiffness that often rely on the long-term effects of mechanical signaling without sufficient temporal resolution, what role mechanosensors such as ion channels play in stiffness-inducing malignant phenotypes is of interest. The field of ECM stiffness and breast cancer biology may be shifting toward an earlier temporal resolution using models that employ or capture the dynamic stiffening of extracellular matrices. In an elegant study using time-lapse imaging of mammary MCF10A-Ras transformed acini, the authors demonstrated that acini mechanically remodel their surrounding substrates beginning at tens of minutes up to ~3 h, then they begin to spread by ~5 h, and finally show disruption of normal morphology by 10–20 h [207]. In a mechanism attributed to ROCK/myosin dependent contractility, the invasive phenotype could be reverted through mechanical isolation of the organoids [207]. One method using laser irradiation to stiffen 3D matrices on command resulted in invasive phenotypes in MCF10A cells 3 days post-stiffening [178], compared with that of 20 days in culture [118]. Similar results were independently reported several days post-stiffening [177]. It is also worth mentioning studies that test other methods for mechanical stimulation and their effects in mammary epithelial cells. In a clever system employed by Bissell, Fletcher and colleagues, T4–2 breast cancer cells that normally form disrupted acinar structures in 3D culture were phenotypically reversed into normal rotating acinar structures, with a central lumen in a process termed mechanical reversion [208]. Interestingly, this was possible only when compression was applied shortly after seeding cells into 3D matrices. In other studies using a flexible silicone culture system, non-tumorigenic mammary HC11 cells subjected to mechanical stretch responded with increased c-fos protein expression (after 60 min of mechanical strain) and ERK1/2 phosphorylation (after 5 min of mechanical strain) [131]. Finally, one method sets the stage for monitoring both extracellular stiffness and dynamic mechanical stress using cells plated on substrates of different stiffness coupled to transient substrate stretch or “tugging” via magnetic manipulation [209]. Following similar approaches, it may be possible to experimentally define novel signaling mechanisms by which breast cancer cells integrate acute mechanical cues, and set the foundation for further drug discovery.
In conclusion, aberrant mechanotransduction is characteristic of the tumor microenvironment which promotes a malignant phenotype in breast epithelial cells and exacerbates tumor cell behavior. Further insight into the mechanisms that underlie these effects could provide new molecular targets to reduce cancer progression. Indeed, there have been new efforts to discover novel mechanosensors which may provide new details. For example, the g-protein coupled receptor (GPCR) GPR68 has recently been identified as a novel sensor of fluid flow necessary for vascular physiology [210], and may be an emerging therapeutic target in cancer [211]. Mechanically sensitive adhesion GPCRs [212] are another set of potential targets, such as GPR116 which can promote actomyosin contractility and breast cancer metastasis [213]. Furthermore, immune cell mechanosensing is a rapidly evolving field [214] that may represent an indirect mechanism in breast cancer progression, as it could also be modified by enhanced mechanosignaling in the tumor microenvironment. At first, the evidence suggests a potential mechanism by which mechanosignaling promotes immune activation against cancer. T cell receptors can be activated directly by force [11,215] and T cell cytotoxicity increased by force [216]. Moreover, T cell [217] and B cell [218] activation can become enhanced on stiff substrates. However, pro-tumorigenic macrophage infiltration was observed specifically at breast cancer tumor invasive edges and correlated with edge stiffness, collagen linearization and TGFβ signaling [167], a mechanism further exacerbated in the more aggressive HER2 and basal-like cancers. Therefore, a stiffening tumor microenvironment could promote rather than inhibit tumor progression via immune cells. Defining specific molecular therapeutic targets in mechanotransduction pathways for cancer treatment, such as targeting novel mechanosensors, may help dampen aberrant tumor mechanosignaling in a new way. In contrast, current microtubule-targeting therapies commonly used to reduce tumor growth result in microtubule destabilization (Vinca alkaloids, Halichodrins) or microtubule hyperstabilization (Taxanes, Epothilones) [219,220]. Microtubules are known translators of mechanical signals such as tension within the cell and are involved in mechanosensing mechanisms [3,122,221]. This non-specific approach likely influences the mechanosensitivity of cells throughout the body, but could also influence the mechanosensitivity of cancer cells that survive the treatment [220]. Careful examination of changes in the tumor mechanical microenvironment, as well as tumor cell mechanosignaling, as a result of these current standards of care therapies, is needed.

Drafted the manuscript and prepared figures: S.J.P.P. Revised manuscript: S.J.P.P., R.M.L., and S.S.M. All authors have read and approved the final manuscript. 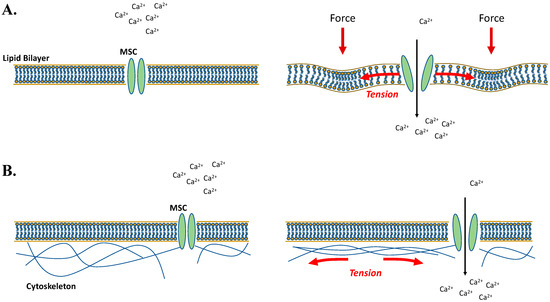 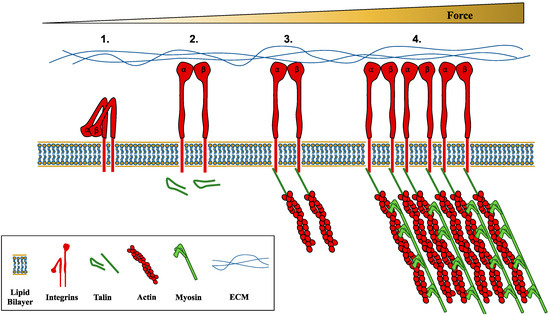 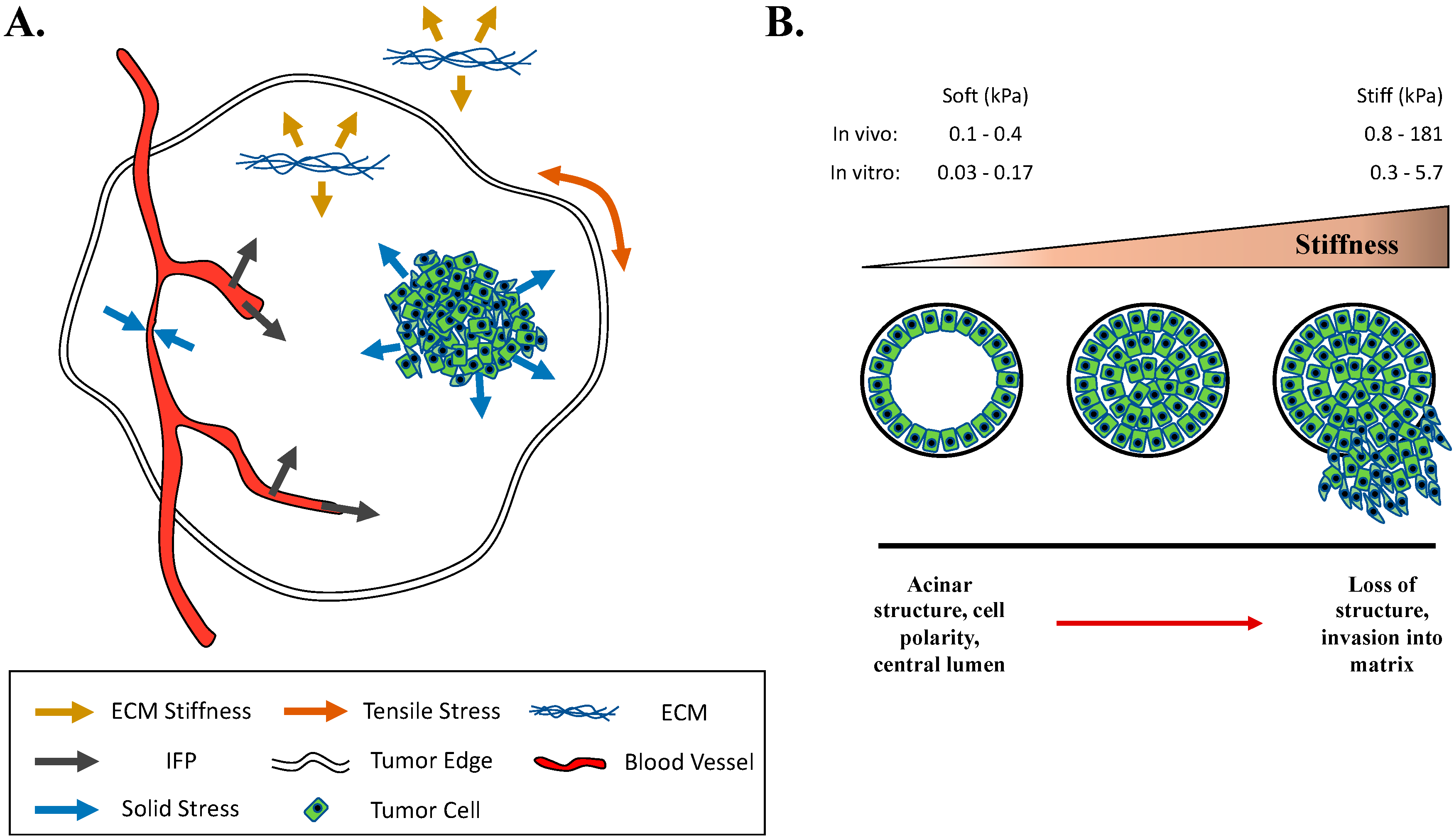