The pumping of fluids into microfluidic channels has become almost an unavoidable operation in all microfluidic applications. Such a need has seen an outburst of several techniques for pumping, out of which the majority of techniques involve complicated fabrication, as they require the introduction of electrodes, valves, piezoelectric materials, acoustic transducers, etc., into the microfluidic device. In addition to the complexity, this also escalates the cost incurred per device. Further, the use of stable external power supplies to produce such a pumping action adds to the bulkiness of the pumps, making them unsuitable for point-of-care diagnostic (POCD) applications. This paper reports a technique of pumping that is simple to realize and does not require external electric/magnetic power, but exploits the elastic properties of materials to achieve the pumping action. This mechanism of pumping ensured the cost per pump to less than 4 USD and can be used for at least 500 times. Several simulations, validation, and characterization experiments were performed on the developed pump to establish its functionality and suitability for use in POCD applications. View Full-Text
Keywords: micropump; point-of-care diagnostics; microfluidics; elastomeric pump; passive pumping micropump; point-of-care diagnostics; microfluidics; elastomeric pump; passive pumping
►▼ Show Figures 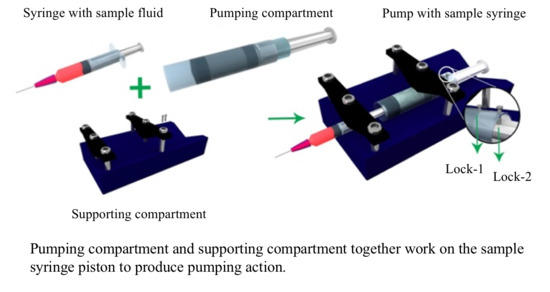