The Applications of 3D Printing for Craniofacial Tissue Engineering

Free from the limitations posed by exogenous scaffolds or extracellular matrix-based materials, scaffold-free engineered tissues have immense clinical potential. Biomaterials may produce adverse responses, interfere with cell–cell interaction, or affect the extracellular matrix integrity of cells. The scaffold-free Kenzan method can generate complex tissues using spheroids on an array of needles but could be inefficient in terms of time, as it moves and places only a single spheroid at a time. We aimed to design and construct a novel scaffold-free bioprinter that can print an entire layer of spheroids at once, effectively reducing the printing time. The bioprinter was designed using computer-aided design software and constructed from machined, 3D printed, and commercially available parts. The printing efficiency and the operating precision were examined using Zirconia and alginate beads, which mimic spheroids. In less than a minute, the printer could efficiently pick and transfer the beads to the printing surface and assemble them onto the 4 × 4 needles. The average overlap coefficient between layers was measured and found to be 0.997. As a proof of concept using human induced pluripotent stem cell-derived spheroids, we confirmed the ability of the bioprinter to place cellular spheroids onto the needles efficiently to print an entire layer of tissue. This novel layer-by-layer, scaffold-free bioprinter is efficient and precise in operation and can be easily scaled to print large tissues. View Full-Text
Keywords: tissue engineering; cell; bioprinting; spheroids tissue engineering; cell; bioprinting; spheroids
►▼ Show Figures 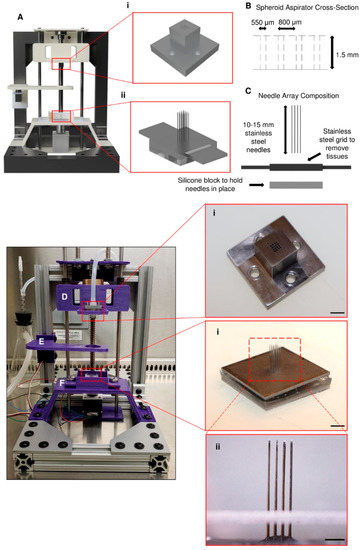